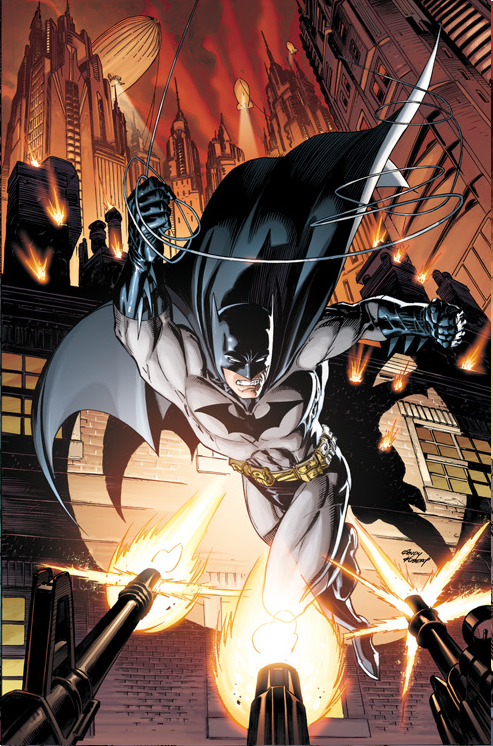 Comic book returns are a dime a dozen. There is however a difference between them: some are good, and some are just poorly executed. With the conclusion of Grant Morrison’s “Return” story, Bruce Wayne returns to the DCU. The question that is left for readers is whether it was more “of the Jedi” than it was Universal Soldier.

“Gotcha”. Those were Bruce Wayne’s final words as he fell Darkseid in Final Crisis. Believed dead, Wayne was shuttled through time and forced to live a life worse than death. The Return of Bruce Wayne chronicles Wayne’s journey back through time and the repercussion it’ll have for the rest of the DCU.

The issue begins in Vanishing Point, seemingly just before Rip Hunter and his companions arrived earlier in the series.  We learn some key information about the Omega Sanction before learning Wayne has regained his memories. The keepers of Vanishing Point begin a bio-organic configuration of Wayne, preparing him for his final journey home. But before doing so, he asks to have his memory erased again, and constructs another time sphere for Hunter and company so they can get home. 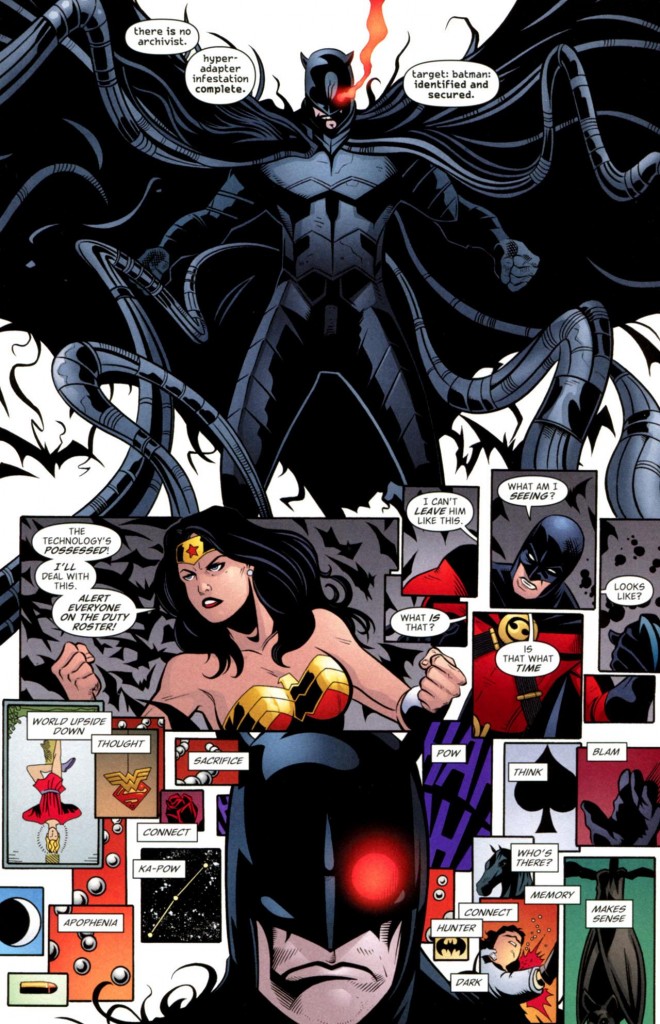 Afterwards as Hunter and company travel through time, Wayne dressed in a bio-organic bat suit, confronts the Justice League. Each of them confront him to take him out before he destroys the world. Donna Troy, Congorilla, Jade each fall with little effort from Batman. Tim, as Red Robin, confronts Wayne and explains what Darkseid did to him. Wonder Woman joins them, carrying the suit Bruce wore when he confronted Darkseid in Final Crisis. Wayne compels her to use her magic lasso on him.

Here we learn the breadth of Darkseid’s plan. The technology from the end of time was infected by Darkseid and was used to infect and ultimately isolate Wayne. The technology completely bonded to Wayne’s nervous system, meaning he would die if separated from it. But Wayne tricked it, had the archivists wipe his mind to protect his friends and used them against it. He trusted them to save him, and they do.

There are two “legs” of the artwork in this issue. The art is evenly split between the more technologically advanced pieces towards the beginning of the book while it’s set in Vanishing Point and later while Bruce is in his techno-suit(?), and then more commonly the standardized art we’re used to in any other book.

As with the earlier artwork that introduced us to Vanishing Point, the work in this issue is equally abstract. Not only are the archivists(?) unusually composed to reflect the advanced technology of that period, their word bubbles are very mechanical in how they’re drawn and how the text is placed within them. This is simply reflected by a change in font, but it does the trick. 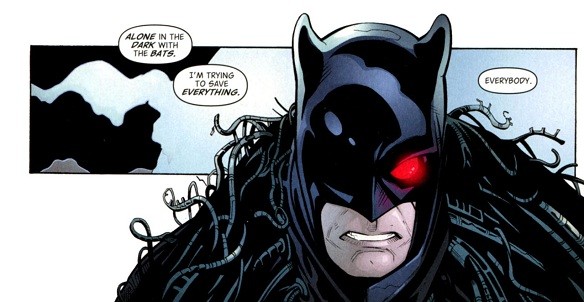 The panel layout is fairly basic for most of the issue, using a single, larger panel as the focus piece of the page, complemented by smaller panels offering varying angles of the same main focus. There’s very little differentiation in this composition until the end of the book where the story becomes a little more frantic. Here Bruce Wayne quickly takes down the League, while they scramble to recover from their posterior bruising. The panels, which by this point have expanded upwards of a handful, become a little more varied in their placement.

Two pieces stuck out for me. The one page where we see memory fragments of Wayne’s travels through time, fractured into their own solitary panels to represent the fractured state of Bruce’s mind. The rose, the bullet, his parents, a bat, even the strange Wonder Woman/Superman pendant provide a glimpse into the mind of Batman. The second piece that sticks out is the Darkseid page where we gleam the graveyard of the fourth world, and where Bruce encounters Metron. The graveyard looks eerily fantastic, while the puzzling, large head of Darkseid reminds me of Garok from the classic X-Men animated series. It’s a cool looking page suffice to say.

I suppose we should address the elephant in the room first. It appears Darkseid’s not dead, unless I’m misinterpreting the page I mentioned. It seems it could be an allusion to the episode of X-Men featuring Garok, but it’s always hard to tell with Morrison books. In the series, Garok was a fallen god. He was transformed into a large stone head that was the embodiment of himself, later reverting to human form if I recall correctly. 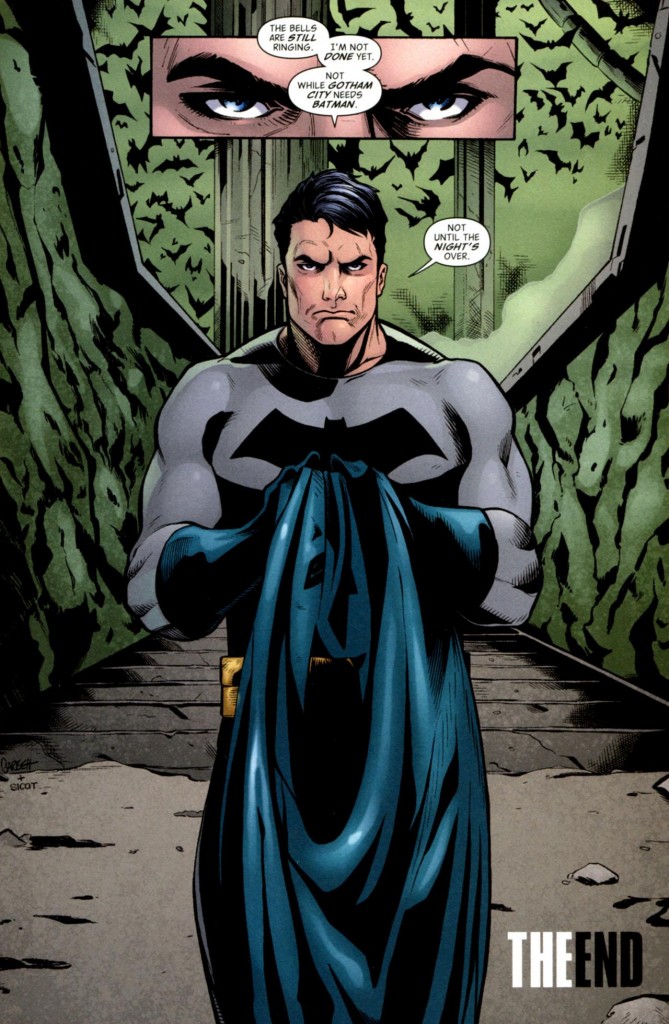 Continuing on, Morrison seems to have expanded the Batman mythology even further with this series.  This issue particularly reveals the contents of the box, the possibility that Dr. Hurt will be or is Darkseid’s host; or at least worships him as his god. Darkseid also seems to have symbolically had an integral part in the creation of Batman.

Thankfully, we finally get answers as to what the Omega Sanction actually is, and what Darkseid’s ultimate plan was. In the end, as he monologues at the fourth world’s graveyard, what we see is the inherent loneliness of godhood. Still wishing Bruce Wayne to be his host, his avatar. The entire purpose seemed to focus on isolating Wayne and then taking him as his host. It’s also something Morrison highlights towards the end. Despite acknowledging how gunshots left him alone after his parents died and defined his life, he hints towards the first truth of Batman: he was never alone, and he had help from his friends in life, death, and oblivion.

Ultimately, Morrison debunks the notion that Batman is a god conceptually. His very life contradicts what a god is, despite Batman as a concept being very much a myth unto itself similarly to a god’s definition.  Morrison however did what we seldom do, and in separating the man from the bat, he defined Bruce Wayne as a person in relation to his importance to the rest of the DCU.