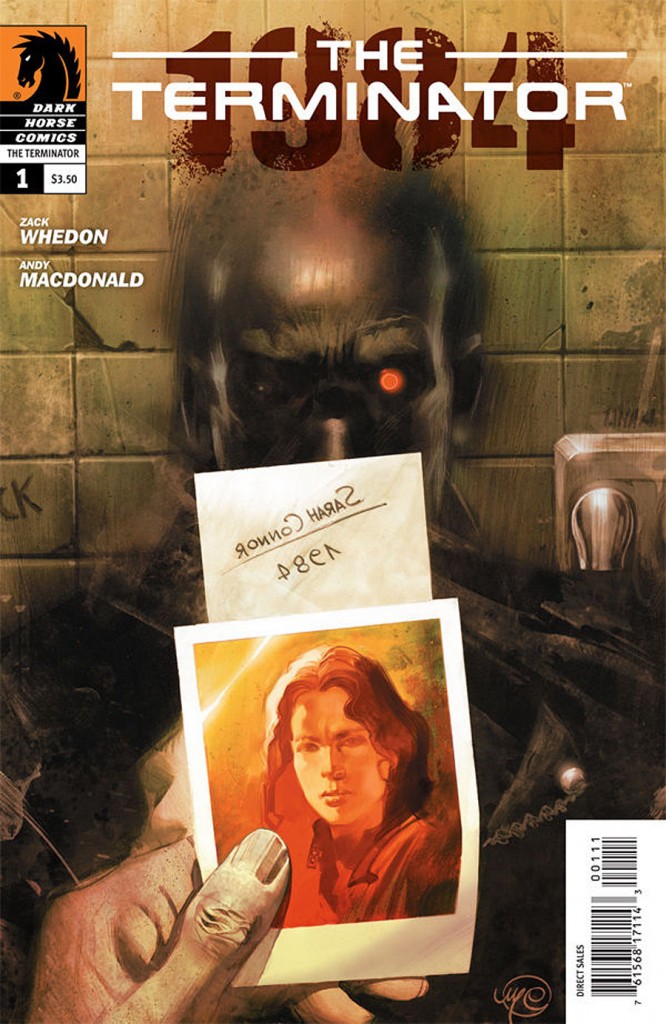 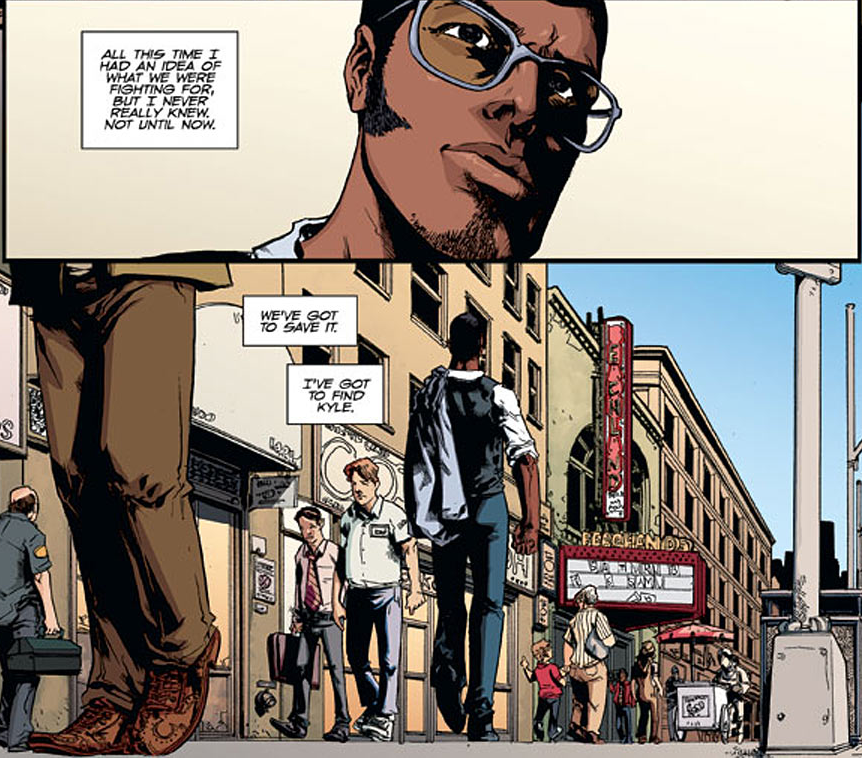 Following his three issue mini-series Terminator 2029 that concluded earlier in the year, Zack Whedon returns to the Terminator universe with another run of stories focused in 1984. Whedon expands on the story of Sarah Connor and Kyle Reese, bringing Kyle’s friend Ben from 2029 into the mix to reinvigorate the classic James Cameron story.

Building off James Cameron’s 1984 film, Zack Whedon revisits the Sarah Connor-Kyle Reese relationship by adding the twist that Reese may not have died in the film. Pursued by his friend Ben from 2029, he joins with the infamous Sarah Connor to find the man she loves. Robots getting blown up may also be on the menu. 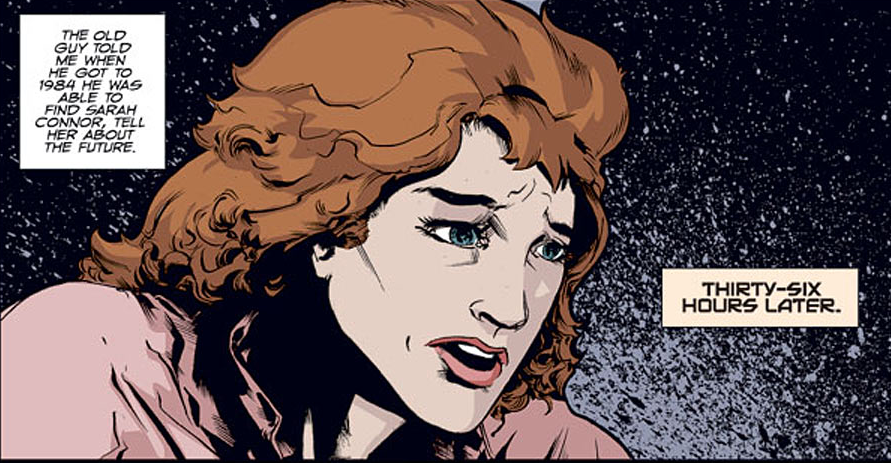 The issue begins with Kyle’s interrogation at the police precinct, events which took place in the original Terminator movie. The story is equal parts recap of the first movie’s events, and new additions to the story. There’s nothing new to the story beyond Ben’s first foray into the 20th century until we see Kyle dive into a dumpster before the tanker blows up. Afterwards we relive Sarah’s dismantling of the T-800 using the compactor, precisely lifted from the movie. Ben arrives on the scene to find the authorities have the area under control; Kyle is apparently barely alive with a weakened pulse, while Sarah struggles to stand on her wounded leg. The medics work on Reese, but decide to “bag” him and take him away.

Ben follows the van Kyle was loaded into to a secluded military base. Ben decides he’s going to need help to get Kyle back, and although it takes him four months to find it, he does in Borrado, Mexico. Here we find Sarah Connor taking target practice with her rifle. She’s interrupted by her companions who bring Ben to her; his hands bound behind him. Ben explains his belief that Kyle is still alive and he needs her help to bring him back. Sarah tears up at the thought of Kyle still being alive. Wiping the tears away she storms off and reminds us why she’s one scary, badass woman.

John McClane has nothing on Sarah Connor. 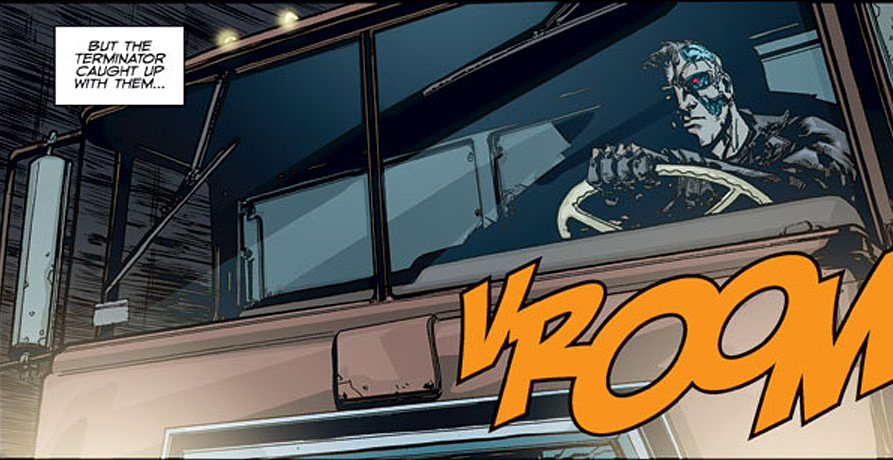 Andy Macdonald returns with Whedon from their 2029 run. Terminator 1984’s art is pretty good, but nothing too spectacular. The pencils are quite solid, but mostly very average for the most part. The pencils are at their best in the panels where Ben arrives, when the T-800 is being crushed, and when the tanker explodes. I did like MacDonald’s inks, and felt he did a good job of differentiating the pages where Kyle is being interrogated and the rest of the book. It captured the mood and tone of the differing points of the story. The colours are very vibrant and bring MacDonald’s overall work up a notch.

The scenes with Ben walking through the streets, mall, grocery store and later the streets captures that sense of wonder he feels being in a different era than he’s accustomed to. What’s really cool about the artwork is the dynamic used to contrast the civilization Ben is acclimated to in comparison to our own purportedly more civilized culture. Here Ben walks through a supermarket and finds it all bizarre. Next time we see him, he’s scavenging scraps from a garbage can while dressed in an expensive suit he took from a clothing store. It works in the vein of the series’ classic social commentary comparing the civilization we’re accustomed to, to the one the characters in the terminator universe grew up in; it characterizes everything we take for granted in a single page. 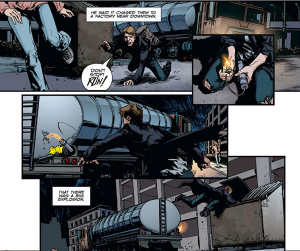 I think bringing this series into 1984 was the right move. Throughout 2029 I found myself not too into the story, it felt un-engaging at times and bogged down generally. It didn’t focus enough on Kyle or John, the two main figures in that period. The series was used mainly to set this story up it seems, bringing Ben over from 2029 and introducing him into the 1980s story where Sarah and Kyle meet, get down with their bad selves, and pop out a kid named John who’ll basically save us from ourselves. The catch is obviously Kyle is believed dead after the first movie, but the story by Whedon reveals that to hardly be the case. I think this story has the potential to surpass 2029, and I think a lot of that has to do with the inclusion of Sarah Connor into the series as she joins Ben in trying to recover Kyle.

1984 does a good job of paying homage to the James Cameron commentaries regarding fate and destiny, as we follow Ben into the past in order to save Paige from her fate in 2029. The old Terminator credo, “the future is not set in stone, there is no fate but what we make,” is no more prevalent than in this book. It’s the running theme of the series, and Ben continues that belief in his quest to change the course

of the future. In addition, adding the wrinkle of Kyle Reese’s being alive and we have the makings for an interesting twist to the universe. I’m curious to see how this works in relation to the film canon, where there’s no mention of Kyle being alive obviously after his death. It’s a nice creative twist. I’m still not entirely sold on Zack Whedon as a writer. He’s been good in his Dr. Horrible and Terminator books so far, but hasn’t really knocked one out of the park yet. 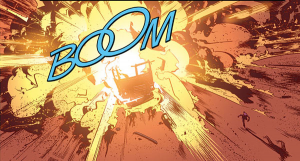 Terminator 1984 adds a new wrinkle to the franchise, and is yet another Dark Horse series that will surely bring fans of the series into comic shops. Whether it finds its voice is hard to say. I’ve not found anything as far as whether this is a limited series nor how many issues this is intended to be. With good art and solid writing though, the book has potential to do well. If you’re not a fan of the Terminator films though, you’ll have little to no reason to read this series.