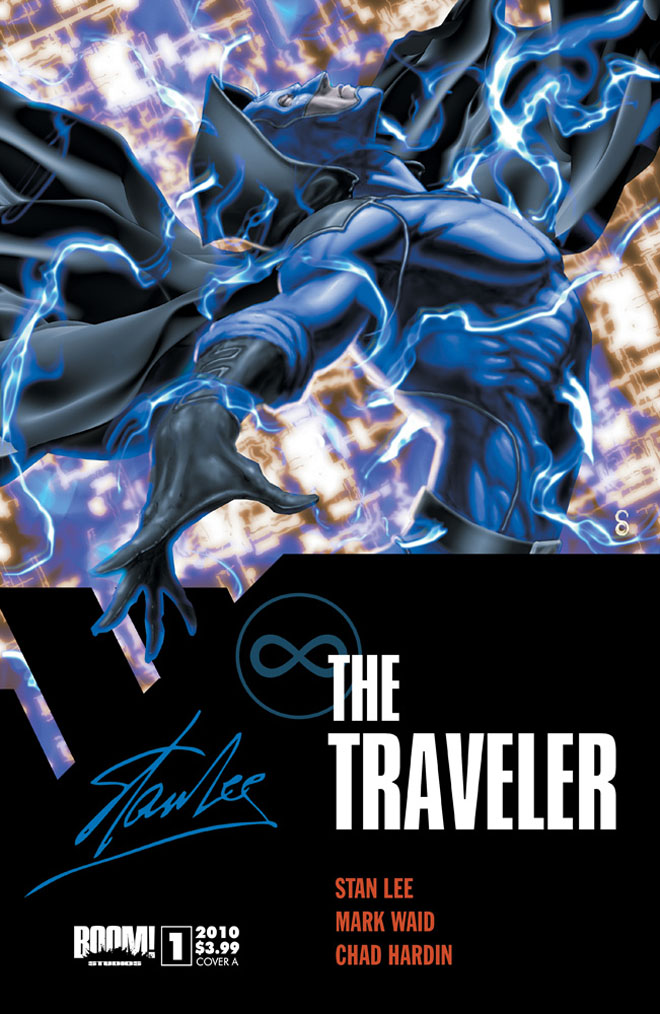 This week brings us the second of Stan the Man’s latest creations. Published in association with Lee’s POW! Entertainment, Boom! brings us the story of The Traveler, a hero who controls time and space. Is this a timeless classic in the making?

Attempting to fight off the attacks of the Split-Second Men, The Traveler does what he can to clean-up the streets of Richmond, Virginia one person at a time. And he has plenty of it!

The issue begins with a woman named Danielle trying to pass an eye exam for her driver’s license. After passing, she leaves but encounters one of the split-second men. With powers over the electro-magnetic field (…), he causes steel girders from a nearby construction site to hurdle to the ground. The Traveler 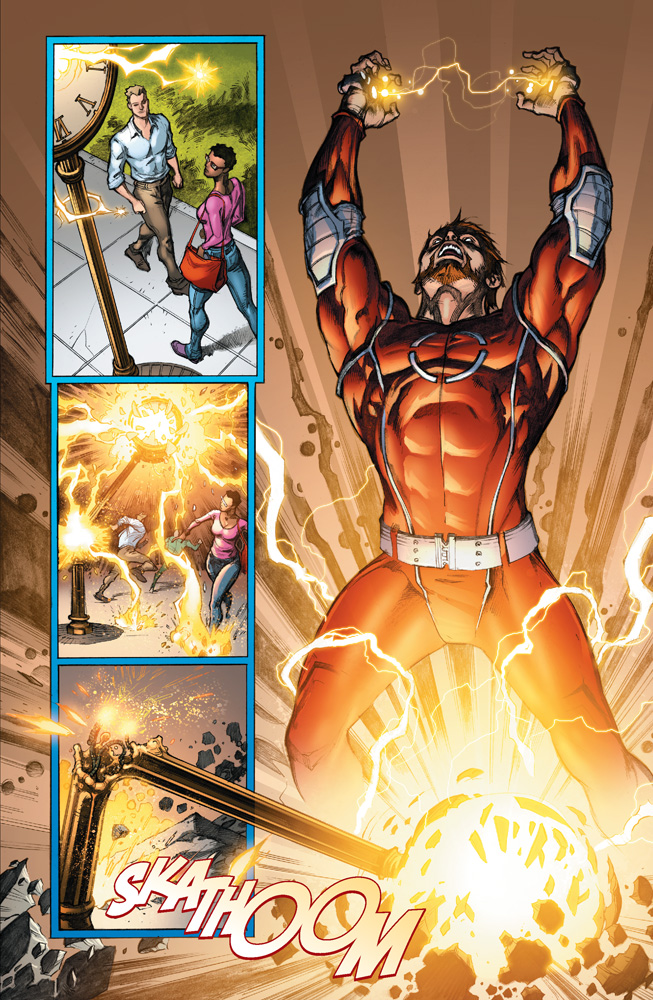 arrives just in time to prevent any further damage, freezing everything in the general area. He helps Danielle get away, deciding to cower inside a trailer that’s promptly picked up by the attacking Split-Second Men member named Angstrom. As he attacks the trailer, The Traveler tosses a cylindrical gas tank at him which quickly explodes as Angstrom uses his powers to attack the trailer. He’s immediately engulfed in flame as the tank explodes, affording The Traveler the opportunity to slow time and space down; subsequently knocking him out with a single punch. Afterward, Danielle notices the letters K-R-O-N-U-S on The Traveler’s costume. The Traveler seemingly accepts the moniker of “Kronus”, but hastily leaves once the police arrive on the scene. He takes Danielle’s glasses before leaving her, mysteriously saying he wishes he could explain why he had to crush them. He leaves, but not before telling Danielle she’d never believe why.

Later, “Kronus” walks about the Richmond streets and stops at a window. Facing the window, he pulls back his mask to reveal gray hair. Nearby, another of the Split-Second Men arrives to cause more trouble, bringing more officers to the scene. He attacks a bus that’s thankfully empty save the bus driver, who scurries to the back of the bus as the Split-Second Man dissolves the front of the bus. Kronus punches a hole through the bottom of the bus, pulling the driver down through the sewer manhole. We find out that this member of the Split-Second Men is named Splinter, who’s able to decay matter. Splinter follows Kronus down into the sewer and unsuccessfully attacks him, missing him entirely with a punch and consequently rupturing a water mane. On the surface, FBI Julia Martin arrives and tries to apprehend Kronus. He tells her everything about her life, much to her own disbelief. The issue ends abruptly as Splinter arrives and punches a hole right through Agent Martin. 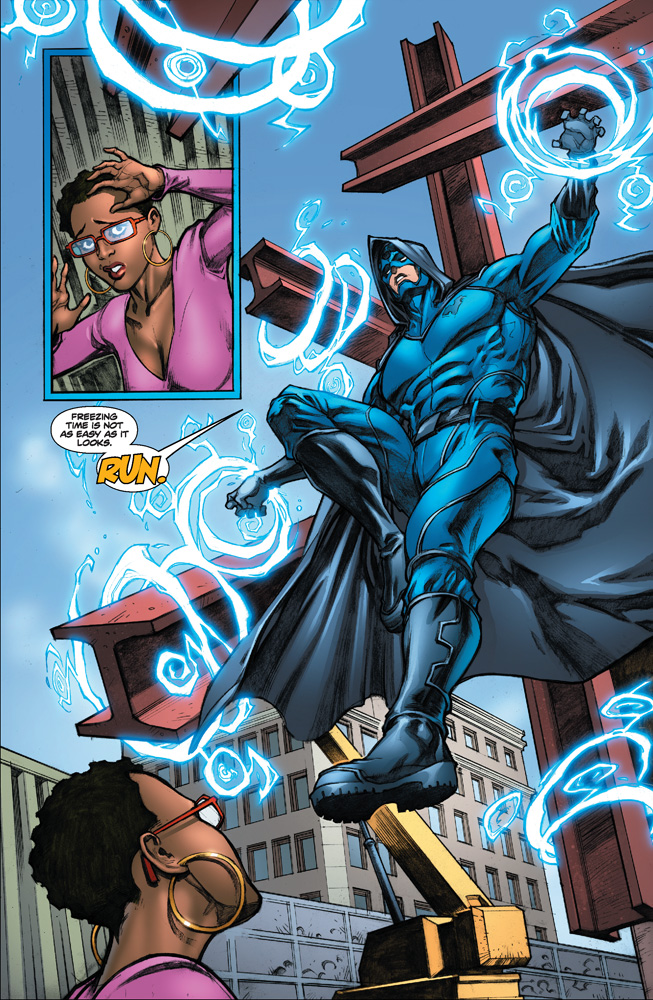 The artistic style is very similar to the other recently released Stan Lee creation, Soldier Zero. Blond’s colours throughout the issue are extremely bright and colourful, presenting a vibrant array of visuals. Angstrom is afforded some great effects with his powers, complemented by panel transitions like the one where he’s introduced: a light post falls at his feet from one of the side panels into a larger vertical splash image. The electrical current surges around his body and it looks really nifty.

Kronus’ time-stopping powers manifest multiple circular energy emissions that surround whichever object he’s trying to manipulate, including his own body. I was really impressed with the art overall, especially the sewer scenes later in the issue. Splinter’s powers are drawn similarly to Kronus’, but are emitted as green energy and is drawn more like green electricity. The page where he ruptures the water main looked nice, with sewer water exploding from the walls and pushing him backwards. One of the coolest images though is saved for the end when Splinter annihilates the FBI agent’s body. It’s truly gruesome, and darn cool to boot.

When these Stan Lee creations were first announced this was the book I was looking forward to the most of the three. That was reaffirmed when I saw the detailed promos for them back in August at the Boom! Studios panel at Fan Expo. Unsurprisingly, it didn’t really live up to how I imagined it. For a 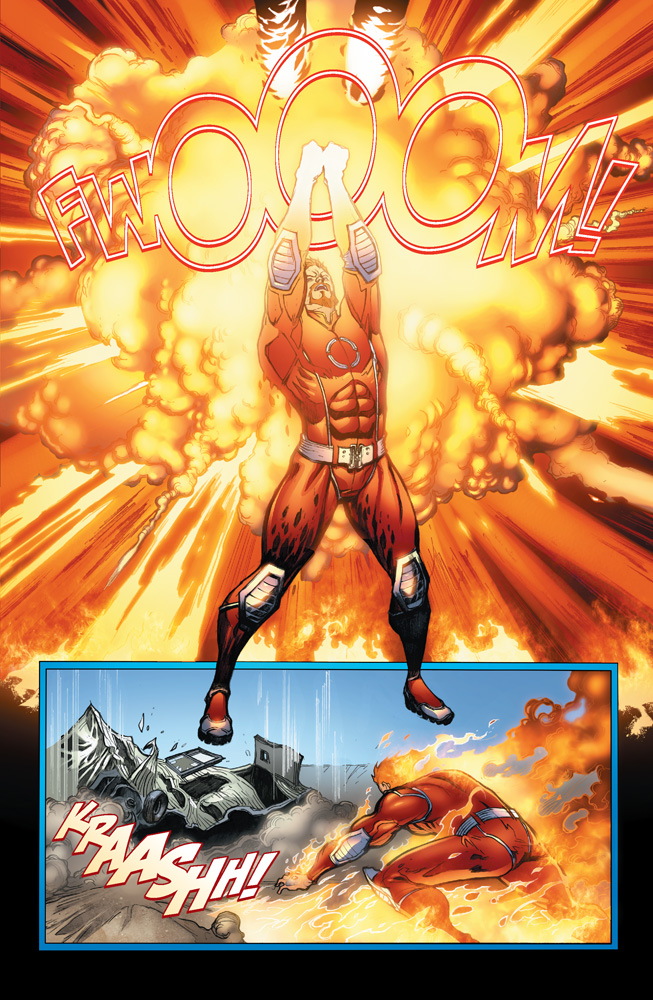 concept like this, I think there’s more that can be done with the character than was done in this issue. To be fair, these are new characters and with that comes the necessary introductions to the primary personalities and how their powers work. While underwhelming as a whole, it was solid in conveying the necessary characterizations to fortify the book’s foundation. Even still, I feel like Soldier Zero got off to a better start of Boom!’s latest books and did a better job of both telling a good story and establishing the book’s foundation.

Where this book will exceed its brethren is its potential. After reading the first issue, I feel like this book has more potential conceptually to tell better stories. As much as we hate it as fans, it doesn’t have to hold itself to continuity based upon its premise. That will require competent writing to pull off well, because such an open-ended premise can be problematic. The Heroes television show is an example. Mark Waid has been historically hit and miss with his books, so it’s hard to say how he will fare on this book and with this character. You’ll have to wait and see, but if you’re a detractor of Waid’s writing already, you’ve no reason to start now. It’s an original character and concept that I’m willing to devote some time to, but in the long-term I’ll wait to see how it develops. As I said though, between Stan Lee’s newest creations so far Soldier Zero is the better read.