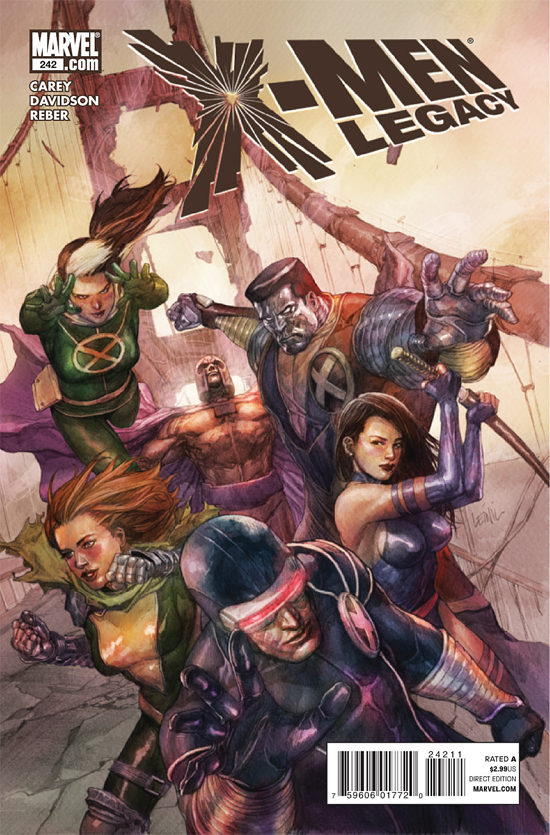 Coming off a lackluster story arc, Mike Carey returns Rogue and company to the San Francisco area where they finally attend to the aftermath of Second Coming. The X-Men travel to San Francisco to repair the city’s damages, but can they repair the damage done to their own ranks? Does the book live up to its legacy?

The suspense is killing me!

After their battle with Bastion during  Second Coming, the X-Men’s lives were forever changed. The mutant population is left to tend to their wounded, and help the city they call home rebuild itself. Some wounds cut deeper than skin, though, and we may not yet know how dangerous the extent of that damage is.

At the beginning we find Hellion still coming to terms with the loss of his hands (see Second Coming), as Dr. Rao tries to retro-fit him with cybernetic implants. After a dramatic outburst, Rogue arrives to collect Hellion, the scene shifts to the topside of Utopia. 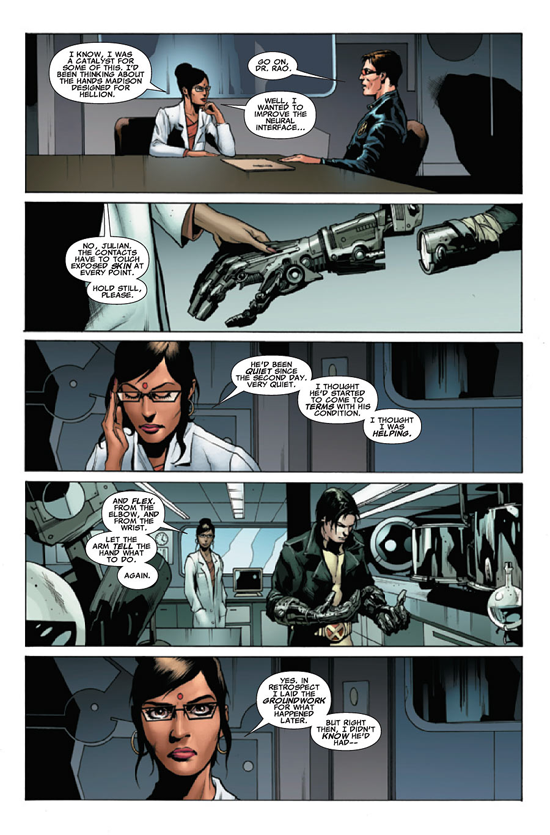 On the surface, Hope walks by while many of the younger mutants play baseball. They ask her to play, but she opts to take a walk instead. The books starts to take a turn as we see dialogue/reports provided by various mutants on those recently affected by the events of Second Coming. These are shuffled between an X-Men meeting held by Cyclops where he decides they need to help San Francisco rebuild itself. Hope demands to be allowed to help, which Cyclops grudgingly agrees to on the condition that Colossus watches out for her while they’re off-island.

Once they arrive on the mainland, they tend to a construction site and help the workers rebuild a building. While most of the mutants use their powers to get the work done, Hope opts to do the things the old-fashioned way. She decides to dig with a shovel. Hellion confronts her and continues his “woe is me” tone, storming off afterward. Karima continues having problems with her sentinel based tech-systems. They continue to malfunctioni to the point she feels it best she leave. She does, but not before a system malfunction causes her to blast Colossus into a steel girder.

While digging, Hope meets a young girl who asks her why she doesn’t use any powers. She remarks a shovel isn’t super; Hope responds, saying “It’s the fence post that’s super.” She asks the girl to help her hold the post while she knocks it in. Meanwhile, Hellion throws another fit nearby, and knocks the posts over.

While this is going on, Karima’s sentinel systems activate and she begins to scan and assess the threat levels of the mutants in the area, attacking Hellion and later Hope. Considered the highest threat of those present, Karima blasts Hope as she tries to shield the young girl from harm. 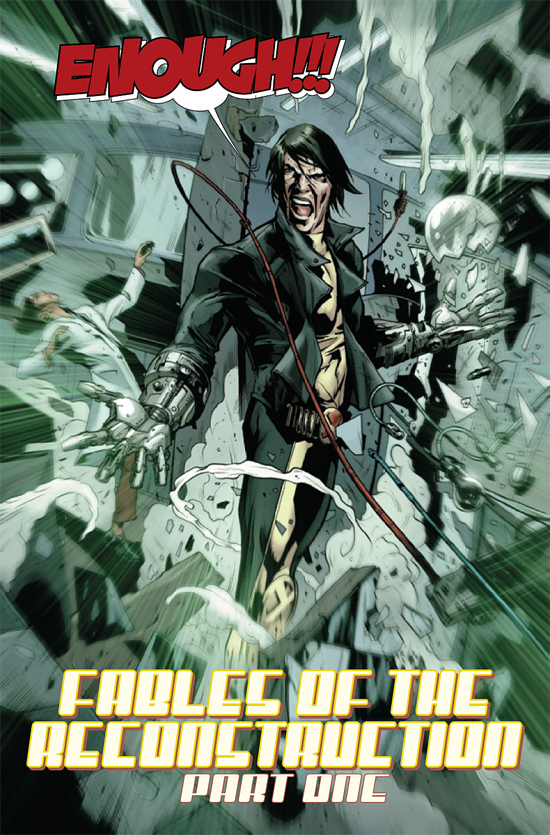 Davidson’s strength in this issue rests in the single page spreads where fewer characters are featured. Examples include the second page featuring Hellion as he tears apart Dr. Rao’s lab, and the final page where Hope shields the little girl from Karima’s blasts. Overall the art was good, but not great. I felt like the individual characters were well drawn, coloured and inked, but the layout as a whole was rather boring. Most pages featured a very by-the-numbers layout, featuring anywhere from 3-5 panels neatly placed. Because of that, the presentation is fairly dull. Davidson shines in this book where he takes chances with the art, notably in the pages mentioned, but also the scene where the mutants take a boat across the bay to the mainland. Here we see the entire city backdrop with the X-Men traveling in the foreground; to complement it, there are four panels of conversation. Those are the best pages in the book by far.

The character models are well drawn and very expressive, while Magneto’s helmet is drawn in more of an old school way mimicking his more villainous period. The interior of his helmet is darkened and you can’t see his face. If this is to foreshadow a future power struggle, then bravo. On the whole, the issue’s art was solid but formulaic. I feel Davidson can do a lot better, especially where it’s very evident with the three pages I noted that he’s capable of it. I’m looking forward to seeing his work develop.

If you read my review of issue #241, you’re aware I wasn’t too fond of the last story arc. I felt that it was very lackluster, and that it wasted my time as a reader. That feeling is amplified here where I don’t see a single supplementary character of note from that arc. And that’s a good thing, but further discredits that particular arc. Carey returned to form with this issue, delivering a good, humanized story with Hope very much as the central character in the story. Legacy has been a consistently solid, character driven book and Carey is on the ball in this issue delivering moments of contention, suffering, strife and humanity within the 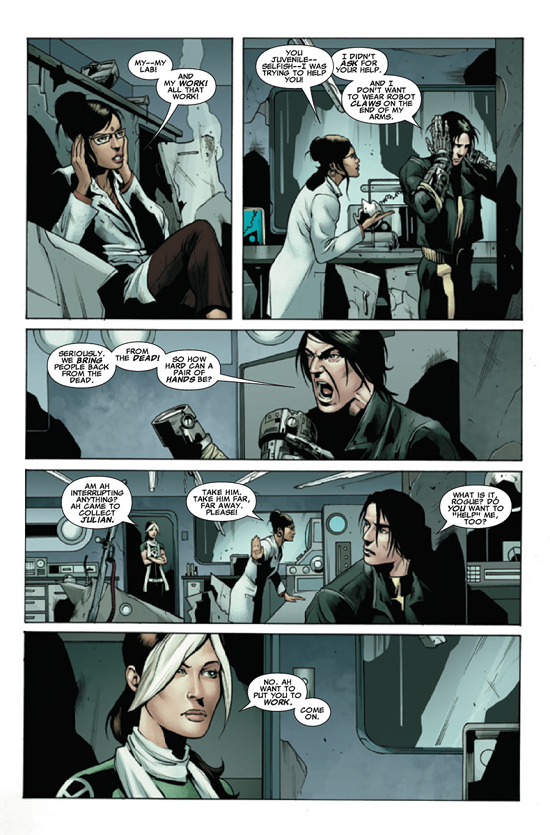 issue. We see Magneto contend Cyclops’ plan to help San Francisco rebuild, we see Hellion continue to come to terms with his loss, and we see the X-Men ultimately come together to help the city rebuild. Yet, the best points are saved for Hope, who chooses to help without her powers as a slight nod to her upbringing by Cable. In the process she makes a new friend in a young girl who was oddly on the construction site at the time. This  developed Hope’s compassionate characterization, and helped make her the most human of the characters in the story, creating a more personalized aura around how she approaches life.

On that note, I feel like the book is shifting its focus. The book usually works in stages. Notably it works in extended character focuses or arcs, where there will be a central character of focus for an extended period, and eventually transition into another. We saw it initially where Professor Xavier was the central character. Then at a certain point, Rogue was introduced as part of an Xavier arc, and later took over as the central character while Xavier faded into the background quietly and seamlessly. I feel like it’s happening here, where Rogue was barely in the issue, but was there enough to maintain a presence. Meanwhile, Hope was very a central character. Perhaps this is the beginning of Hope centric stories.

It’s gets tricky at that point where recommendations are concerned. I think Carey has been a consistent writer throughout his run, and a lot of that is in how he handles the characters. Given that Hope is still very much a new character, if this is indeed a focus shift I don’t know that there’s enough of a Hope fan-base that a book can be sold with her as a central focus. Legacy has been an ensemble book for some time though, and if it’s handled right Legacy will continue to thrive. However, if you’re not a fan of Hope, you may want to put the book down.