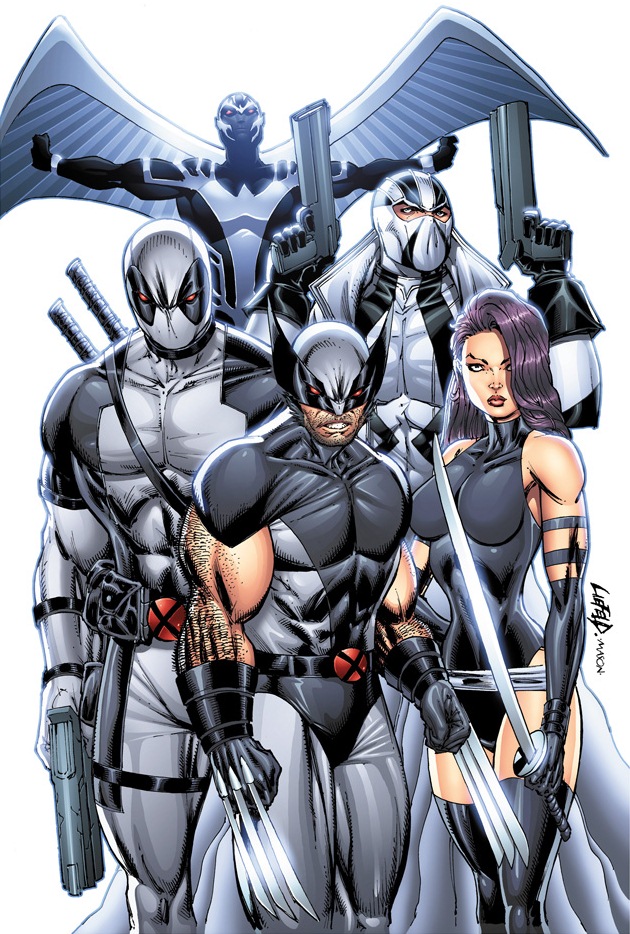 After a critically acclaimed run on X-Force, writers Chris Yost and Craig Kyle left the book at the end of Second Coming to pursue other projects. Enter Rick Remender, former writer of the Punisher War Journals series, the Doctor Voodoo mini-series, and currently the Punisher series. Let’s see how Remender fares in his maiden voyage into the X-universe?

X-Force has a single purpose: to do whatever was necessary to protect mutantkind. With the blessing of X-Men leader Scott Summers, X-Force did what they needed to safeguard their race, and prepare for the return of Hope. Now with that resolved, what becomes of the team? Uncanny X-Force follows a similar band of mutants operating under the radar within Marvel’s heroic age. Not even Cyclops, the man who commissioned them in the first place is aware they’re still a team. Now with a new line-up, the team continues its quest to do what they can to protect each and every mutant on earth.

Once you open the book, you see one of the newest members of X-Force. Deadpool. The man of a million gags. The merc with a mouth. The dude with the moves. The sultan of over-exposure. He’s a lover, he’s a fighter. Most of all, he’s just a misunderstand badass.

We find Deadpool standing atop a large gargoyle, diving down into the green sludge(?), monologing as only he can while he makes his way through the catacombs. He eventually stumbles on to a ritual sacrifice where a young woman is killed.

Meanwhile at X-Force’s headquarters, one of the team’s co-leaders continues to grapple with the alternate side of his psyche. Warren Worthington, with the aid Psylocke, continues to try and contain his Archangel persona. The Archangel persona has Warren, Angel, bound in his own mind as he tries to wriggle free of its control. Psylocke awakens, suffering a psychic attack from Archangel. They talk a little about the work they’ve done together in trying to control his other personality.

They’re interrupted by a phone call from one of the team’s operatives. They break off, and prepare to go to work.

The team erupts from the Atlantic and makes their way east towards the location of our former narrator. They enter the same catacombs and are quickly attacked by the gargoyles within. They seem to have an adverse affect on the heroes, as Wolverine is infected once wounded by the gargoyle’s axe. Suddenly enraged, he attacks the team and nearly kills Warren until Psylocke shoves her psychic dagger into his mind, ridding Wolverine of his bad influences.

After apparently being captured, Deadpool reminds why we love and hate him so. On the verge of being cut up into microscopic little Deadpools, all he can do is narrate for us and sing really bad tunes. So aggravated they don’t realize who’s behind them, Archangel fires several blades into their backs, killing Deadpool’s captors. One bad joke later and the team is off to the races, pursuing the sole reason they’ve out this far. The final page leaves with a chilling look at one creepy little child. Now resurrected, Warren Worthington’s greatest foe beyond himself , Apocalypse, stares at his world history teacher, smiling.

Children of the Corn, eat your hearts out.

I’m not quite sure what to make of the art, and that’s not meant to be as negative as it sounds. The opening pages featuring Deadpool are nicely drawn and beautifully coloured. I liked the contrast between Deadpool’s alternate costume and the green tones inside the catacombs. Contrarily though, once inside the main chamber the colours become really grainy and unappealing.

The Angel-Psylocke pages are better. I liked the nighttime backdrop through the window. The moon’s illumination of their faces with the night’s blue shades highlights their faces. I do have to question how Psylocke is drawn though. Given her history I’m not sure which version Marvel is going with as the official ethnicity for her. I could have sworn when she returned that she was the British/Caucasian version as opposed to her previous oriental version. This version of the character seems to be much more oriental than she appears in the other X-men titles, so I’m not sure if Opena is confused as to which version he should be drawing, but this needs to be fixed and settled, and then reflected unanimously throughout the other x-books one way or the other. It’s otherwise a marginal editorial mistake.

The following pages with the team flying off in the…flying, Saturn looking ship. Different tones once more, reflecting the sunrise/sunset through the ship’s dome. It creates a reddish hue on the pages, contrasted by the greens used in the following pages once they arrive in the catacombs. The art settles into a rather plain groove for the remainder of the book, relying less environmental tones and using more natural lighting. The creepiest page is saved for the end, where we see a resurrected

Apocalypse as a young boy, dressed down in a blue suit; his eyes a bright red. With that smile, that is one scary looking kid.

Following the critically acclaimed Yost-Kyle run on X-Force, those are large shoes to fill. Remender does a good job of touching on the finer points of the characters, hitting their personality traits competently and accurately. Between Deadpool’s droning narratives, Wolverine’s natural smugness, right down to Warren’s internal struggle with his psyche and the subsequent relationship between he and Psylocke as she continues to keep him in check. This book features solid characterization in these respects.

The most interesting part of this initial story, and any follow-up for that matter, is going to be the relationship between Warren and Apocalypse, knowing their history and the hatred Warren has for him resulting from what Apocalypse did to him, it’s safe to say we’re going to see some intense confrontations not only between Warren and Apocalypse, but his own teammates also. The big point of interest though for me is Apocalypse’s age; this isn’t the fully grown 7 foot something we’re used to. No, this is a version of him as a young boy, still learning about the world. That’s evident through having someone teach him about world history. There are two obvious routes that can be chosen story wise. One, Remender can take the likely route and simply have Apocalypse be the tyrant we know he turns out to be. Contrarily, he could the riskier route and delve into a nature versus nurture analysis and explore the matter of can Apocalypse be salvaged. That in itself, considering his history, is an interesting story, especially when we factor in Warren’s feelings on the matter. This is purely speculation, but your guess is as good as mine on the creative team’s direction.

This first issue was solid. There were some minor hiccups with the art which I hope are corrected in future issues, but it was a good comic experience. The team is a fairly different mix of characters, bringing Deadpool and Fantomex in as x-regulars, while bringing Psylocke over from Uncanny X-Men. Altogether it’s looking good.