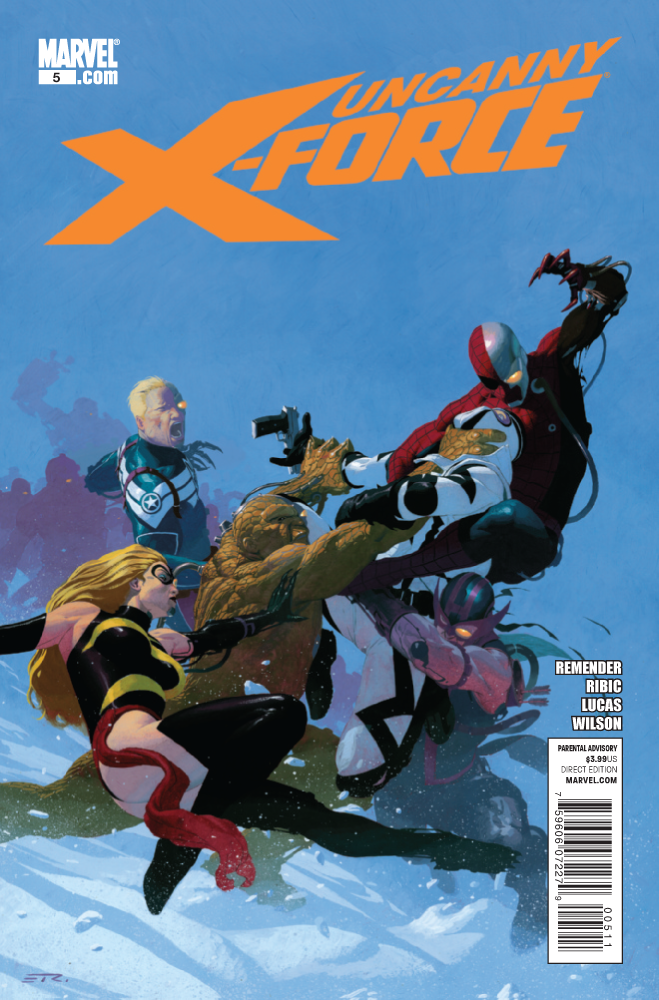 Five issues into the latest incarnation of X-Force, Remender’s run has taken a very early twist. Whether it’s for better or worse is up for debate, but regardless the book has quickly changed direction. Let’s take a look. 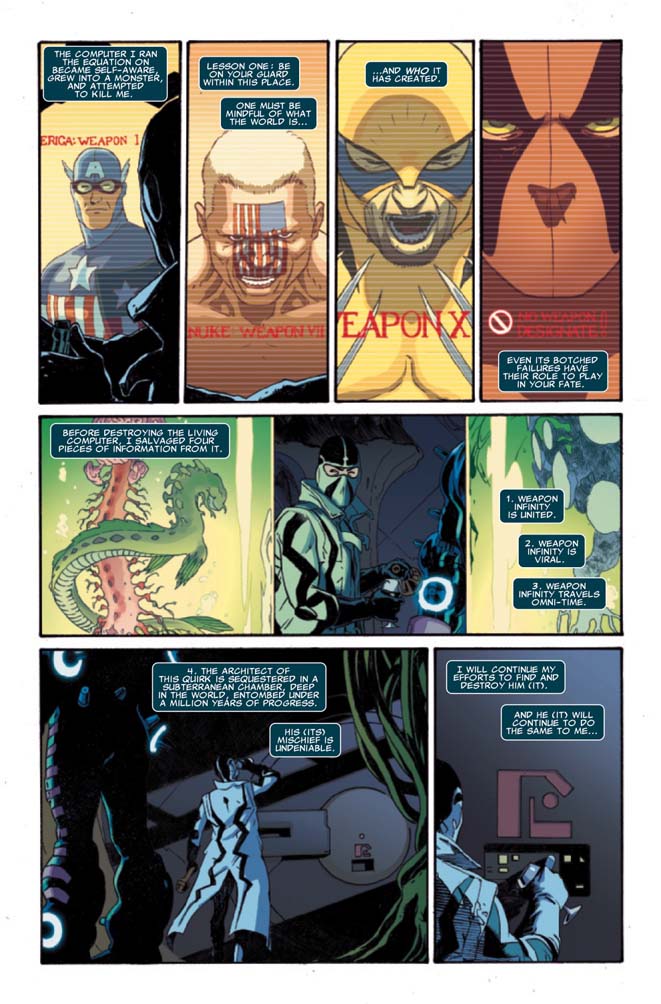 A gunshot rang out at the end of issue four that left the young boy destined to be the mutant tyrant Apocalypse dead on the floor; smoke rising from the bullet hole in his forehead. Much of the issue’s beginning features Fantomex separated from the group as he monologues about the city he safeguards and has re-sized into a small domed civilization similar to Kandor. Protecting it, it would seem, is essential to protecting the future.

Meanwhile the rest of X-Force gathered to discuss their assassination of the young Apocalypse. It’s revealed that Deadpool had called the meeting because he wanted to talk about what the team did. An argument follows that ends when Deadpool storms off, disagreeing with Wolverine’s take on Deadpool’s role on the team. Warren tells him a startling piece of truth as Deadpool walks out of the base; Wolverine justifiably is shocked and dismayed.

Back in the French Alps, Fantomex visits his mother, discussing philosophy and the nature of existence. Their discussion is interrupted by hero-cyborgs resembling various Marvel characters ranging from Steve Rogers and Elektra, to Thing and Cyclops. The cyborgs quickly subdue Fantomex and destroy his home, nearly killing him in the process. He awakes and instructs his ship to scan the area to keep a lock on the cyborgs, only to look up moments later to see Deathlok.

I was left to wonder about some of the art in this issue, because some of it just wasn’t that good. While the grittier tone of the ink and colouring does a great job of capturing the darker tone set by the series’ mandate, the actual pencil work by Ribic felt a little off this issue in patches. 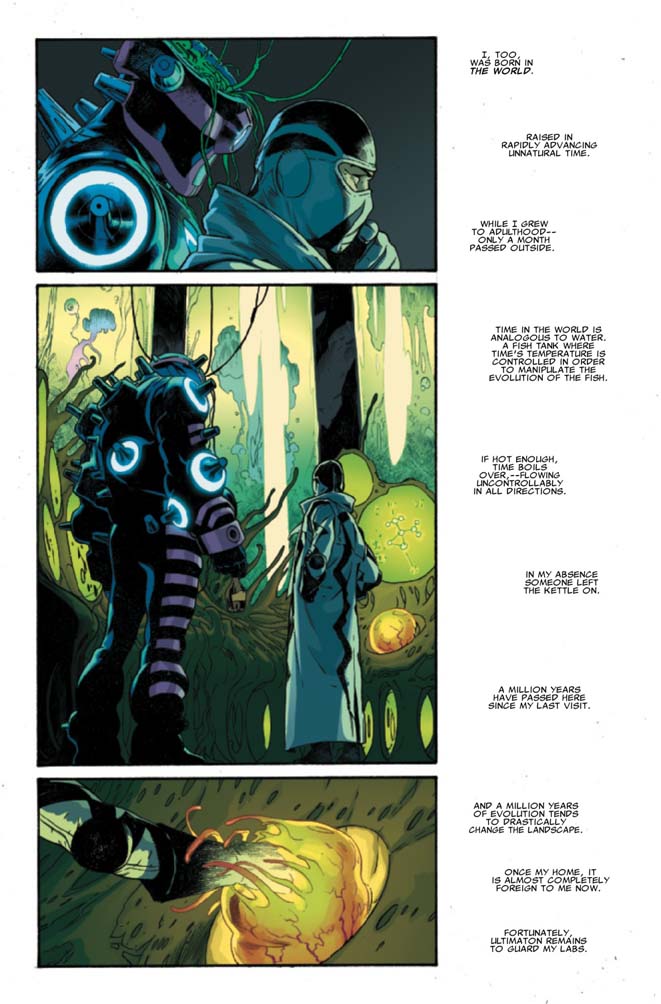 Using Wolverine’s face as an example during the team meeting, his complexion felt grossly exaggerated and disproportionate to any of the other characters’ faces in the issue. There’s one page where his face is strangely rigid and over accentuated, while in the next panel  his cheek bones are very high and his forehead is sticking out a little too far forward. They don’t really sync up with the other depictions; few of them do.

The remaining offerings improve and are consistent, notably Fantomex’s appearance in the first half of the book. I thought to have the art justified to the left with the text on the right was a nice touch and added a more journalistic, diary type narrative to the overall presentation. It really captured that part of Fantomex’s story. In the latter half of the book, his story continues. Although some of the work doesn’t depart from “by-the-numbers” panel conventions, the rest of the artwork felt very dynamic throughout the final fight scene between Fantomex and the cyborgs. This was accomplished on several pages by overlapping the panels and cutting some of them at a diagonal slant; in some panels like the consecutive Cyborg-Thing/Fantomex tussle, it provides another angle or perspective of the battle to look at and it’s very much this way throughout the back half of the book.  Another great example is the Elektra fight.

Overall the art really is solid on this book despite some hiccups. 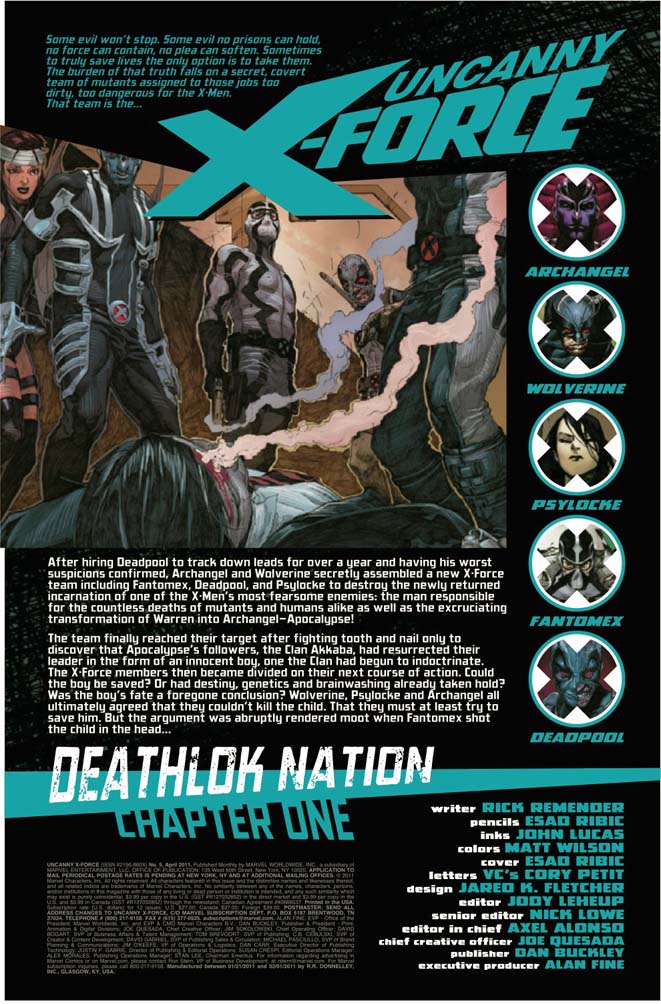 This is the first issue of the second Uncanny X-Force arc, and I’m torn on the direction. The first arc centred on the resurrection of Apocalypse as a young boy, with the team tasked to go and eliminate him; only not realizing until they arrive that he is a child. As expected this created a moral dilemma for the team, one which it confronted and decided against fulfilling. Save for Fantomex, that is. Instead, he did what the others couldn’t and put a bullet in the young boy’s head. Whether he stays dead is debatable, because it is Apocalypse after all.

First, I think they jumped the gun on this and should have stretched it over another story arc. This had the potential to be a huge story, but it feels like it ended quicker than it should have. Perhaps another issue or two could have been used rather than the four it was given. I feel like there was so much that could have been explored from the perspective of pursuing this ultimate end (killing the young boy),  and THEN seeing the conclusion as it played out. It feels like a missed opportunity.

Secondly, and on the other hand, it sets the tone for the book; doing what’s necessary for the better of all. In doing that and doing it early, I feel like it’s going to allow Remender the opportunity to further explore the repercussions of those actions, and perhaps develop Fantomex’s character even greater and fully analyze his personality in relation to his teammates while uncovering what differentiates him from them; affording him the perspective to act as he did in the previous arc’s conclusion. We saw some of this throughout this opening issue. Again, the boy’s final fate is still up in the air considering who it is.

Ultimately though, while there is potential to continue the threads woven from the previous arc, this issue feels like a change in direction that at least now doesn’t pay homage to the established story. It feels altogether separate in introducing Deathlok and the other cyborgs. Unfortunately, although this series started off strongly, it feels like it’s starting to simmer.