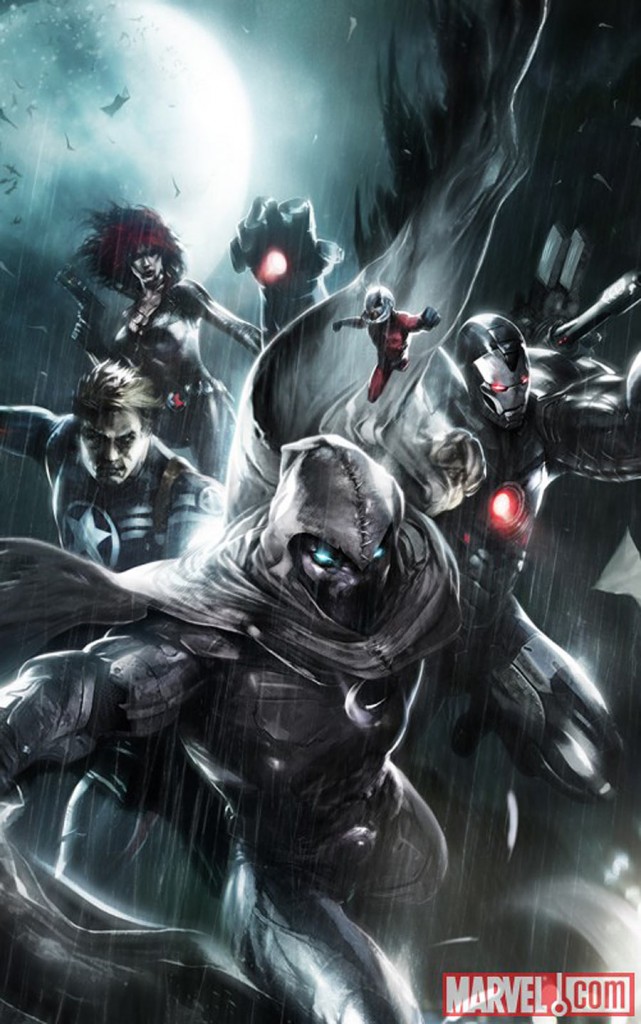 Split personalities, post-traumatic stress disorder and vigilantism. Couple that with a history as a mercenary, and a fighting prowess rivaling that of Batman, and you can guess Moon Knight’s approach to cleaning up the streets. Add in his status as an avatar for the Egyptian god Khonshu, and you get a slightly psychotic vigilante who has no reservations about bloodying up your nose a little. I’ve always thought of Moon Knight as an edgier Batman, primarily because of his penchant for brutality, yet that characterization fell by the wayside once the previous volume ended early last summer. The series was re-launched last September under the title The Vengeance of Moon Knight. Now ten issues in, the series continues to try and find its footing as the character enters Marvel’s Heroic Age as a member of the Secret Avengers.

In the midst of Norman Osborn’s dark reign, Moon Knight returns to New York City to help put an end to his abuse of power as the United States’ director of H.A.M.M.E.R. Yet the stigmas attached to his brutal methods remain, and his return isn’t met with a great deal of fanfare from anyone. The series follows Moon Knight as he struggles to change his ways, while fighting off visions of the god who granted him his status. Despite an onslaught from Osborn and the arrival of an old enemy, he succeeds. This success doesn’t go unnoticed, as the recently returned Steve Rogers, former Captain America, offers him a spot on his Secret Avengers squad.

In the previous issue Moon Knight had been offered a spot on Steve Rogers’ team of Secret Avengers. In this issue we see Moon Knight in conflict with not a thug, hood, or super villain, but his own teammates. Very early we see it to be quite clear given his reputation that Moon Knight isn’t welcome on the team. Most of the characters on the team aren’t quite sure how to act around him, nor are they sure what to make of his being there. The team deploys to take out a group of pirates who had commandeered a crude oil tanker as well as its crew. Once they arrive, the team quickly battles the pirates and despite their efforts to defend against the heroes, including several sea monsters, the pirates are defeated. By the end of the issue, Moon Knight monologues the end of the arc by saying that not only are they a bunch of ass-kickers, but more importantly a team; contrasting his earlier monologue where he says he’s never been a “team guy”. So concludes the final issue of The Vengeance of Moon Knight#10 before the book’s hiatus.

From cover to final page, the art is pretty good. Considering how much of the issue is monologued by Moon Knight, we get quite a few panels that accentuate that. Several pages detach Moon Knight from the group as he’s thinking about why he’s there, admitting to himself that being on a team has never been something he’s comfortable with. Ryp captures that feeling from several perspectives; several pages have close-ups of Moon Knight as he’s thinking, some panned out with the team in frame with Moon Knight in the foreground, as well as alternative pictures with several characters in the foreground instead. It clearly establishes a visual representation of the divide on the team over his presence.

There are some pretty good action pieces here. Ranging from Moon Knight splitting an arrow on one pirate’s sword into the hands of two adjacent pirates, promptly disarming them, to Valkyrie crashing through a wall on her Pegasus; the art does a good job of capturing the chaos of the fight scenes, while also capturing the immensity of the problem once the sea monsters are summoned.

An issue I had with the art was character’s expressions. It’s hard to figure why they’re drawn as they are, or what their supposed to be thinking or feeling in the panels. Most of the time in the issue the characters’ faces are weirdly drawn or contorted. They’re drawn with the intention of conveying a thought or sentiment, but they are poorly executed. It really walks a fine line between conveying disgust, determination or anger, and looking they’re taking a great big poop. It happens several times with Ant-Man, Steve Rogers, Sharon Carter and even Beast. I suspect we’d see much of the same if Moon Knight were not wearing a mask. Despite these shortcomings, Moon Knight’s fight scenes are really cool, getting some vintage Moon Knight butt kicking while literally knocking a few heads together along the way. 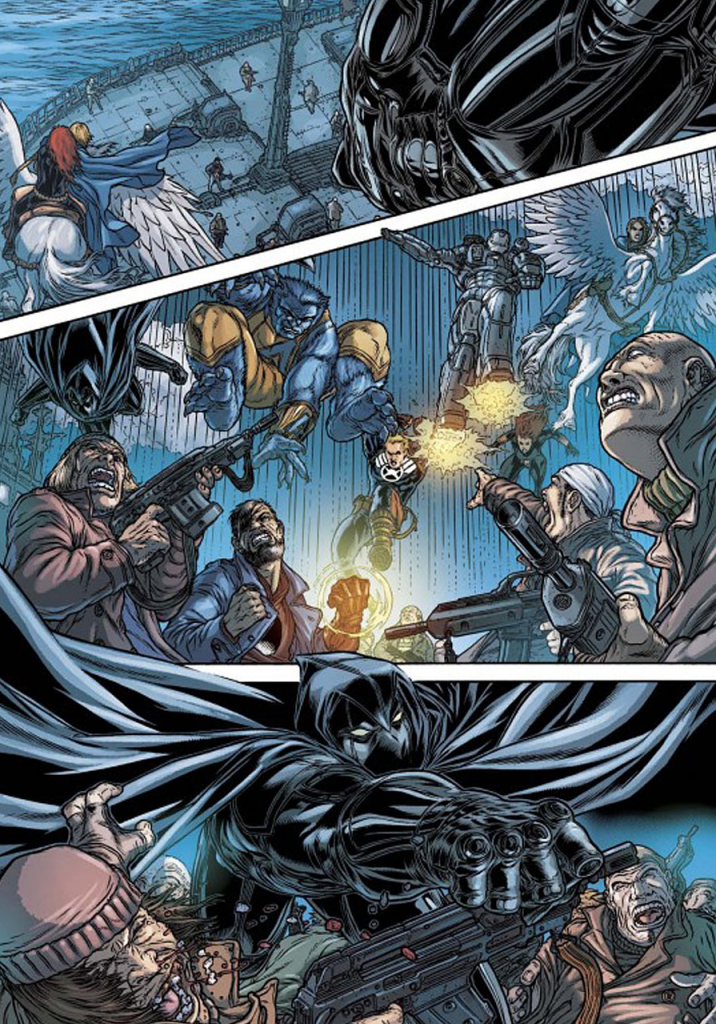 ve not been sure what to make of this book for some time now. Despite its title, The Vengeance of Moon Knight hasn’t really lived up to its name. The book is clearly trying to steer away from the character’s brutality to make it more accessible. The problem is though that the character is entirely defined by that brutality. He’s always been precisely like Batman, only without the restraint Bruce Wayne has. Batman with more pronounced psychological issues would be the best way to describe him.

The previous volume had seen Moon Knight’s coming to terms with his violent nature, yet still committing violent acts against thugs because his god Khonshu compelled him towards it. In Vengeance, Moon Knight primarily tries to atone for his past and make honest amends by changing his methods despite public outcry over his return to the city. The problem is though it betrays what makes the character interesting. Although it does add a layer to the character, and his constant fight against his delusions of Khonshu, it really feels like this was done to set up Shadowland where Matt Murdock takes a more brutal tone. It just so happens that while this book is on hiatus there will be a three issue Shadowland mini-series featuring Moon Knight. I think perhaps this was the reason for Moon Knight’s forced turn against his actions, but it comes off as cheap and forced to coincide with a larger event.

Moon Knight’s inclusion into the Secret Avengers takes a page out of the Batman playbook, and casts him as the “not a team guy” character. The issue did a good job of accentuating his thoughts about teams in the early parts of the issue, while capturing it with its contrast in the final pages. It feels like the last ten issues have been a set up for his involvement with the Secret Avengers though, leaving that feeling that Marvel has been wasting our time with this book while they prepare to launch into Shadowland. The book and this issue serve as a decent jumping on point for new readers, but for older readers that reaction may vary. It’s hard to chart how the book will be written post-Shadowland, especially considering Hurwitz is writing the three issue mini-series. I suppose we’ll just have to wait and see once the book resumes publication later in the year.