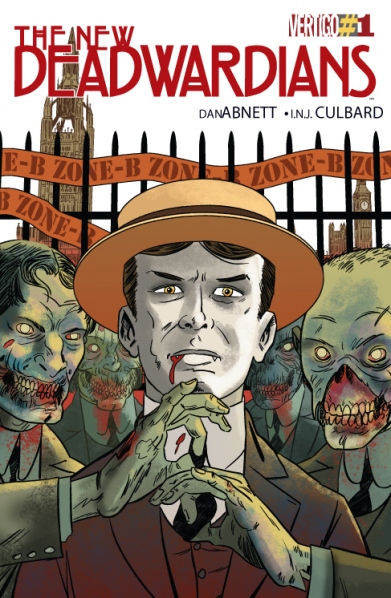 The horror genre in comics can easily be divided into two categories. In one group there are stories which are formulaic, largely unoriginal and don’t really offer anything to the medium. Contrarily, there are comic horror stories which push the storytelling possibilities of the medium and take it to new places and adapt it to new environments. Fan favourite writer Dan Abnett hopes to provide the latter over the course of his new eight-part series through DC’s Vertigo imprint with his horror tale, The New Deadwardians.

The story is set in post-Victorian era England in the early twentieth century, a world where the upper classes have voluntarily allowed themselves to be turned to vampires while the lower classes are almost all zombies. The series’ main character, Chief Inspector George Suttle, is a veteran of the Memorial War and works the slowest beat in the city; he spends his time investigating murders in a world where most are already dead.

The comic begins with a short quote from Isaac Asimov, and quickly following its delivery, Abnett begins to paint his marvelously horror-filled world a frame at a time. Over the first few pages readers are introduced to Chief Inspector Suttle, a seemingly middle-aged man we find laying alone in his bed during the middle of the night, contemplating his present standing in life. This introduction was successful in bringing readers into Suttle’s mind such that his inner monologue helps us understand his thought processes and the actions he undertakes. At the sound of a monstrous growl, Suttle leaves his bedroom and descends to the main floor of his large Victorian home. He finds a zombie, known as a “Restless”, crouched in front of Suttle’s now bleeding maid. Readers quickly find Suttle to be a swift acting man of violence in his dispatching of the zombie in mere moments. Over these pages, Abnett presents us with a clear dichotomous distinction between Suttle’s dominating character traits; we find him to be an insightful, contemplative character while also possessing the capabilities of an action hero type demon slayer. A third layer to his character is added upon the discovery of a dead body.

During his preliminary investigations we find him to be an astute detective, abetting further in the creation of an interesting, multi-faceted character who so happens to be a former member of the British military. With all these character elements blended together, throughout the issue Abnett alludes to one final dynamic of this story: the transformation of upper class society into vampires, Suttle being among them. Throughout the book much of the dialogue both internal and external, seen during a conversation between Suttle and his mother, hints at Suttle’s being an undead creature of the night. While not explicitly stated, Abnett’s subtleties in presenting the story move Suttle’s vampirism to the background of the man’s composition. Instead we find a very humanized individual with immense capabilities and traits, who so happens to be a vampire. That in itself makes the character, and the story, interesting. The motivations towards these mass transformations are unclear, but their revelations leave open the possibilities for greater analyses at a societal level. There is a slight political overtone in Abnett’s writing in casting the upper classes of English society as vampires and the poorer individuals as zombies. The distinction and purpose of that casting is clear, functioning as a commentary on the political sphere and their relationship to their electorate in contemporary society.

Where most books’ artwork is split between several parties who pencil, ink, colour and letter a given issue, this is hardly the case in The New Deadwardians. Series artist I.N.J. Culbard seemingly performs all four tasks, and what’s remarkable about the work is that he does each very well. His pencil work features finely detailed characters, dressed according to the historical period. Of greater note are the panel sequences he employs which demonstrate his talents, be it a slight change in one’s shadow from one panel to the next, or a two-panel set between Suttle and a zombie resulting in the “Restless” having its throat slashed. Some of Culbard’s better work follows as he expertly pencils and colours a panel depicting Suttle with a rifle before blowing the zombie’s head off cleanly. The gun blast itself creates a flash, captured nicely in the ink work around the left side of his face. He similarly captures the time of day very nicely regardless of the hour; on one page he paints a wonderfully darkened, overcast afternoon sky while earlier in the issue during a conversation between Suttle and one of his maids during sunrise, the sun’s morning glow comes shining through the house’s windows. The characters’ faces become illuminated by the sun’s orange-yellow morning light which looks fantastic on the page.

The New Deadwardians is another recent release centered in the zombie horror-genre. Dissimilarly from Rebel Blood which focuses more on an individual’s internal struggles and unlike Walking Dead which broadens the scope of human-horror analysis, Abnett’s comic displays elements from both in its focus on Suttle combined with its macro focus on the larger societal implications of the world’s social conditions. The New Deadwardians feels like a very political book in its premise, playing out across a traditional horror styled backdrop of pitting one monster against another. Abnett’s writing is very interesting, enhanced by his attention to detail relating to character development and the mannerisms of those characters in both their actions and their speech. The book was a very enjoyable read and promises great things over the next seven issues of its run.