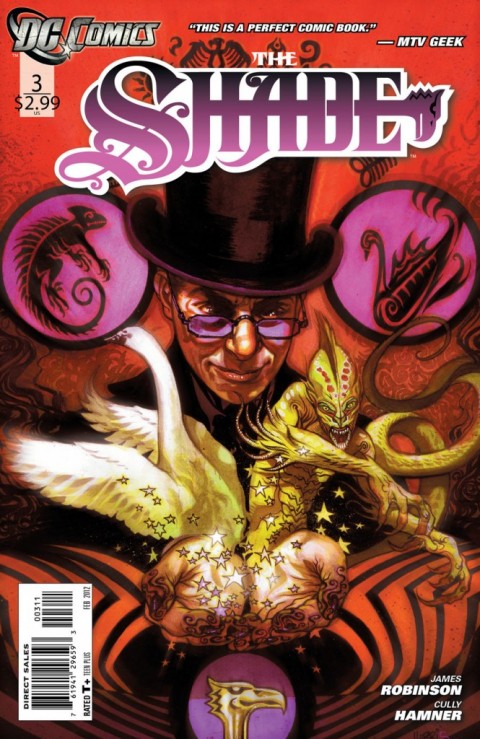 Last week brought the third issue of James Robinson’s 12-part maxi-series to comic book shelves. This multiple century spanning tale explores the history of The Shade while delving deeper into his origins. The book was released as part of DC’s New-52 relaunch. Onward!

After narrowly avoiding Deathstroke’s assassination attempt and learning more of the plot against his life, The Shade travels to Austrailia to uncover the next piece of the puzzle.

As The Shade relives one of his many memories, we find him fighting alongside The Argonaut as they battle with agents of the Idle Hands. Upon their dispatching, The Shade confers with Pemulwuv as to the whereabouts of one Darnell Caldecott, a hermetic billionaire apparently living in seclusion in the middle of an Austrailian desert. There he is guarded by the lizard god Mangar-Kunjer-Kunja. Shade learns what difficulties await him if he tries to approach Caldecott’s stronghold, and resigns himself to meeting with an old acquaintance in Diablo Blacksmith. The two frienemies converse back and forth about the dangers of trespassing upon Mangar-Kunjer-Kunja’s protected grounds. Diablo teaches The Shade about oneness with Dreamtime, a necessity to fight the lizard-god. After providing a thorough explanation, little of which The Shade absorbs, he leaves to face Mangar-Kunjer-Kunja. The beast takes exception to The Shade’s imposition and quickly attacks him, a fight which continues on until Shade demonstrates an aspect of Dreamtime consciousness, commonly known with mystical circles as “Swan-Dreaming.” Mangar-Kunjer-Kunja grants access to Caldecott’s residence, where The Shade meets an old face from his past.

With the third issue of Robinson’s The Shade, we find him delving deeper into Shade’s past in revealing another piece to the puzzle that is the character’s history. As had been announced, the issue employs a storytelling device whereby the issue seamlessly transitions from its natural three issue build-up to its mini-conclusion before moving into the fourth issue where the story will shift into the past and shine light on the shadows of Shade’s existence. This issue capped off the first arc of the maxi-series, concluding with a surprising but not altogether unexpected end given hindsight’s acknowledgement that Shade has lived well over a hundred years. Robinson’s tale is not an over-the-top, action-packed telling of Shade’s history, rather its methodical approach provides glimpses of Shade’s powers, his capabilities, his cunning and more, his history from his genesis to his current standing in the 21st century. I feel this is a very accessible read, and considering my relative unfamiliarity with the character prior to Robinson’s series, I find myself enjoying one of the unsung books of the DC relaunch, and a book which I look forward to reading each month and look forward to collecting as a trade. The story is nicely paced, interesting in its structure, and digs deeper into a character’s history which to this point, much like Wolverine’s prior to Origins, is shrouded in a shadowy mystery.

Hamner continues his interesting work on the series, providing visually articulate pencil work that helps set the parameters of Shade’s world while his inks add a layer of atmospheric tone that expands the visual representation of Richard Swift’s existence. Hamner’s characters are staunchly differentiated from each other, contrasting other artists who typically draw their characters with similar features. Hamner’s Shade and Diablo Blacksmith, for example, have distinguishable features which adds to their visual characteristics. Hamner also excels in how he arranges the artwork on the page, as well as his approach to how he angles the artwork in each panel. When we meet Blacksmith, there are several panels where he descends down from the sky, with our view of him angled from an over-the-shoulder perspective from Shade’s point of view. In another later page, Hamner depicts Shade’s ascent up a flight of stairs. The first panel shows Shade entering a room from one angle with a black vase in the bottom corner, and then in the next panel, from another angle where a different vase is shown; Shade climbs the stairs while manipulating the shadows around him to fix his torn “shadow-suit.” In the third panel he’s completed his climb, once again in full garb. What’s interesting is that the three panels are separated with traditional borders, but together they provide a complete view of the entire room. I think it’s a nice way to represent the setting, where each panel can be taken on its own individually, but together provide a greater visual canvas. I’m really enjoying Hamner’s work, especially his inking work where he’s making a conscious effort to create more shadows and silhouettes around his characters, while work such as his “Swan-Dreaming” artwork towards the end of the issue is pretty neat to look at.

While I had been looking forward to other books amid the DC relaunch, series which subsequently have floundered, The Shade has been a pleasant surprise. After three issues I’m truly enjoying the story Robinson has crafted. This is perhaps the most accessible book of the relaunch, as it not only embodies the entire premise of the relaunch, but delves deeper into the characterization of one of DC’s lesser known or underrated characters and expands the character further. I see this as a greater character expansion than Rick Remender’s Dark Angel Saga, where the principal characters both have unearthed story potential which is in turn expanded upon to create a great story. The Shade is a can’t miss book, which if you’re not reading, you probably should be.