Here are ARCHIE G’s, we don’t think you can make a dependable Pull List decision based on the first serving of a comic. Publishers throw everything they’ve got at a first issue, promotions, gimmick covers, etc. And speculators? Sheesh, don’t get me started on speculators. Because of stuff like that,  sales figures are always bloated.

You need to make the decision based on the SECOND issue, because it will give you a better idea what the series will be like, issue-in, issue-out. 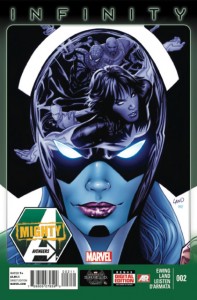 I gotta tell ya, of all the things on our menu, this is my favorite, and I suggest it to everyone that comes in.

MARVEL seems to be taking the same approach with MIGHTY AVENGERS, that FOX took with FIREFLY, setting it up to fail. In the case of FIREFLY, they showed episodes out of order, preempted it on a regular basis, and most importantly, slapped it on Friday nights which was a death sentence in the P.T. E. (Pre-Tivo Era).

MIGHTY AVENGERS starts out at a disadvantage because it begins its life as an INFINITY tie-in. While I am digging the stuff in INFINITY, I hate-hate-HATE these “Extortion Series” where the publisher forces you to buy comics you don’t ordinarily buy just so you can follow the story. I don’t know about YOU, but I work for tips…I don’t have much disposable income.

Which brings up ANOTHER disadvantage: Why did they roll this out when it’s going up against two HUGELY promoted events: INFINITY and that whacked-out VILLAINS stuff DC is doing?

You could make the argument that MIGHTY AVENGERS actually springs from the loins of INFINITY (which sounds like an URSULA LEGUIN title), because this group is formed because all the Marvel First-Round Draft Choices are somewhere either kicking cosmic ass or getting their asses cosmically kicked.

You COULD make that argument, but do you REALLY want to disagree with a guy who could spit in your food?

Don’t let this book get lost in the shuffle.

MIGHTY AVENGERS is DEEEE-licious! As a matter of fact, I would say this is the most Avenger-y AVENGERS on the menu.

AL EWING is an uber-smart guy. He saw those disadvantages i talked about months ago when he was writing this bad boy. So he knew every issue was gonna have to knock it out of the park EVERY MONTH. 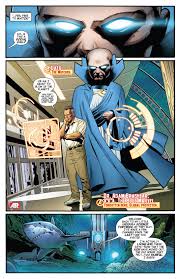 Fer cryin’ out loud, it’s got the friggin’ WATCHER in it. Some call the Watcher, the most powerful entity in the Marvel Universe. I say the Watcher was created for exposition purposes. Need to give a bunch of backstory? Just stick old Uatu in there and let the word balloons fly! BLUE MARVEL’s “conversation” with the Watcher is so well written, you won’t even notice.

I assume everyone at the table has sampled the AVENGERS movie? MIGHTY AVENGERS  is the only Avengers book available that matches the awesomeness of JOSS WHEDON’s gem, thanks to EWING and artist GREG LAND.

The action is epic. There is a battle scene in Times Square that is the most impressive thing to happen there since the TKTS Booth. LAND has a gift for massive scenes that jump off the page in almost 3D fashion, without having to wear special glasses,  or having to pay grossly inflated amounts of money for a lenticular cover ($16.95 for HARLEY QUINN? Really, DC? REALLY? Do you call this “Double-D Cup Marketing”? Well, then, I guess it makes sense).

The dialogue is remarkable. It is honest to the characters, it even ADVANCES the characters, like great story-tellers do. And there is a scene in this book that after you read it, you will never see the phrase “AVENGERS ASSEMBLE!” the same way again…If I’m lyin’ may they kick me out of Local 626 of the Federation of Servers, Busboys, and Grill Cleaners.

There’s a neat little mystery running through the story: Who is SPIDER-HERO? I hope they extend the mystery for a while, because it’s a cool idea…although I have figured it out (The nunchuks were a bit of a clue). 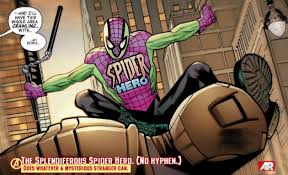 You see that booth over there? Next to the JOUST game? That’s RAOUL’S ROOST. I save it for very, very special customers. Mr. EWING and Mr. LAND will always have a seat reserved there.

I guarantee..if you sample this dish, You’ll order it every month.

I give it FOUR BLUE PLATES.