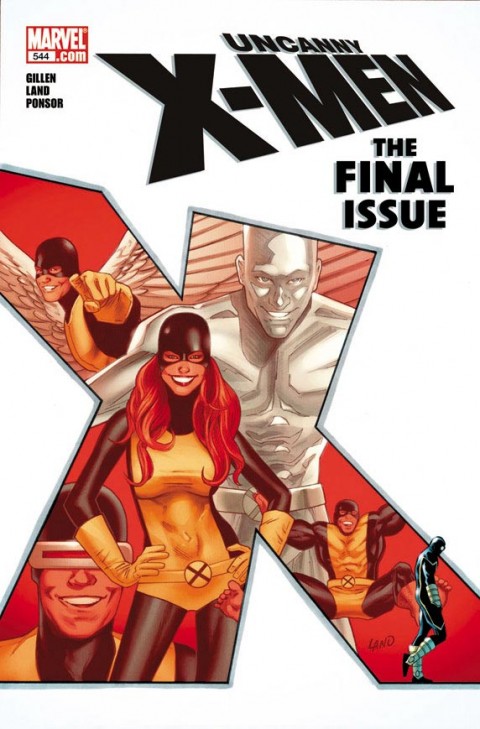 In the wake of Schism, everything has changed for the X-Men. To emphasize that change, Marvel decided to end the long-running X-title, Uncanny X-Men, as of issue 544. With this final issue one door closes on the X-Men’s collective past, while another door opens towards their future.

Jean Grey is dead. Beast and Ice Man have left their long-time friend. Warren Worthington has embraced what he once loathed. The “Beatles” are no more. With each mutant being asked to decide what they believe, the two sides fracture between the Utopian stronghold and a new school in Westchester, run by Wolverine and Beast. While school is back in session for some, for others, it’s graduation day.

Somewhere, hidden deeply from all eyes, Mr. Sinister recounts recent events in the X-Men’s lives: the breakdown, the split and how each mutant has chosen to go their separate ways based on what they believe. As Sinister recalls their past and present, Ice Man takes one last trip into the Danger Room as Cyclops asks him why he hasn’t left yet. As they walk out, they reminisce about the old times, when Scott was a little bit more fun. He and Bobby walk out to the X-Jet to find Beast has returned one last time to say goodbye, hoping his departure’s meaning will finally sink into Scott’s head. As the jet takes off, Bobby creates a snow ball and throws it at Scott, hitting him in the face, stating, “you’re not that different.” With half of the X-Men flying to the other side of the United States, Cyclops walks back into Utopia’s main buildings and begins to take down the photographs of all the X-Men over the years that were hanging on a wall. Emma walks in behind him as he takes the last down and asks him how he’s feeling. Despite being angry, sad and doubtful, more than anything Scott says he feels closure.  Even more, that he’s graduated.

The final issue of Uncanny X-Men was an effective eulogy to the X-Men as they were. Gillen pulled together the story threads and summed up the schism between the two groups of X-Men by using Mr. Sinister to recount the entire Schism mini-series, while telling the final tale of the “Beatles” as Ice Man departs Utopia, alongside the “returning-from-the-grave” John Lennon-esque Beast, leaving Scott in a landscape much harsher than the one Professor Xavier prepared them for. The issue therefore has a dual function: it recaps the mini-series for those who didn’t read it, and operates as a conclusion to the classic X-Men themes which are poignantly summarized in the final pages with Cyclops’ proclamation. The statement highlights the common theme running through the recent stories: the ideas of the dream versus realism, and the corresponding arguments that can be made for each. In either case, this issue was a good bookend to the volume.

Greg Land’s pencils are always fantastic and we saw much of the same in this final issue to Uncanny X-Men. Land’s work commands your attention on the page, right from the beginning of the issue as Mr. Sinister raises his eyebrow, forcing you to take notice of the slight nuances and expressiveness of the characters throughout the book which smack you in the face like a snowball upside the head. Land’s pencils create highly emotive representations of the characters that smile, smirk, laugh or become intensely stern and serious where the situation warrants. There are other examples where Land’s work shines: the Danger Room scenes with Ice Man, the two-page splash featuring images from Scott’s past, Sinister’s “rebirth,” or the removal of the photographs, specifically as Scott looks at the classic photo, the panel pulls out and them it is lifted from against the wall. The best piece of art that summed the story was the final page in its entirety. In the top panel, Cyclops proclaims he has graduated, stated staring directly into Emma Frost’s eyes. In the middle panel we find Scott beginning to close the box packed with the old photos, gazing one last time at his old friends and the Professor before closing the box and taping it shut. It’s a great way to end this beautifully coloured issue which accentuated the story, and feels like the end of a chapter.

I feel like the final issue of this Uncanny volume was a successful piece to the greater mutant story which clearly differentiates the world of the X-Men pre-Schism and post-Schism. In it we find Cyclops dealing with the gravity of his policies and how they’ve driven away his closest, oldest companions. As such, it appears now more than ever in recent issues that Scott has been firmly placed into a mindset rooted in realism regarding the state of mutantkind, and as was effectively stated in the final page, there’s little more for him to learn at a school. I like where this puts him. It’s an interesting plot element considering that his friends, notably Hank and Bobby, have returned to the site of their meeting in New York, versus their formerly groomed leader having moved on to tackle the world armed with his “education.” The dichotomy between the two sides is interesting, because it again brings the forefront question to discourse. When it comes to idealism versus realism, can we, or in the X-Men’s case, they, afford to act in one manner over another.

Stay tuned to CBD, as I’ll be taking a look at the first issues of Uncanny X-Men and Wolverine and the X-Men as they’re released.