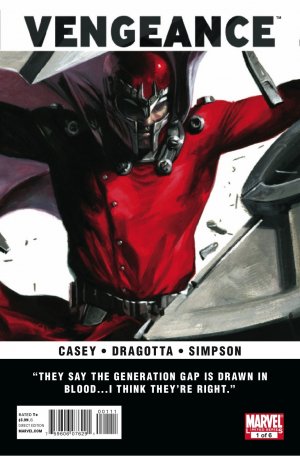 Last week a little book called Vengeance came out. Looking at Diamond’s list I had no idea what it was and likely skipped over it. In fact, I don’t even remember seeing it. Yet, once you see the cover with Magneto featured prominently on it, you can’t help but be drawn to the ‘Master of Magnetism.’ This week we’re looking at the first issue of the mini-series, a series intending to analyze the nature of the younger generation’s villainy in the Marvel universe.

For every person there is a defining moment that separates the life they knew from which they must now acclimate themselves to. The event propels people to the next stage of existence and beyond any semblance of inaction their prior life knew. This is a story of Vengeance. 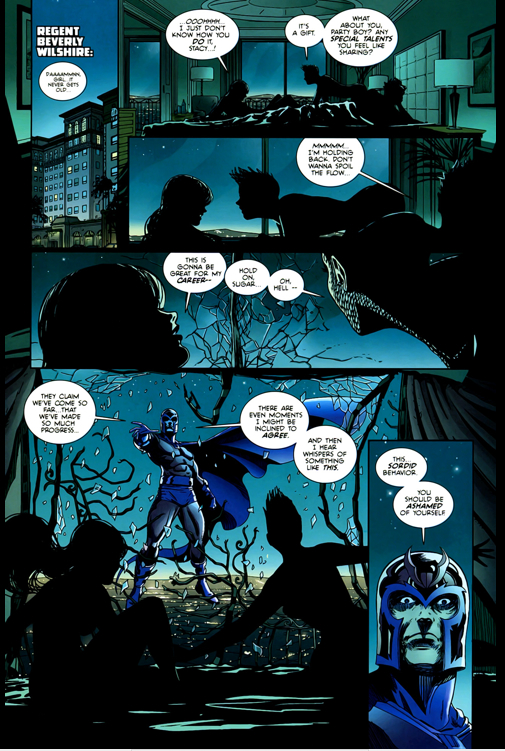 Three months ago a man sat in a shelter while watching Steve Rogers on television, mulling over the uselessness of superheroes. In the present, we find the Ultimate Nullifier in a dance club partying it up with two women whom he later takes back to his hotel room. After a brief conversational interlude between Hitler and the Red Skull in the past, a young team finds themselves mid-operation while trying to extract an individual from their captivity. Once successfully found, the scene shifts back to Ultimate Nullfier in his hotel room with the women, but they are interrupted by Magneto who destroys the outside wall of the suite and confronts Ultimate Nullifier about his actions. The two go head-to-head for some time before their tempers give way to reason and they part ways. Meanwhile, Miss America is en route back to the base with the captive in tow when she’s attacked by horned demons.

I’m not sure what to make of Casey’s story. Having no background on the mini-series, I failed to see what the story was trying to convey. Because of that failure, I found the story to be altogether unenjoyable. The story jumped all over the place, shifting between varying time periods, while the story itself seemed to not make any sense and I found myself bored and questioning what was going on in Casey’s story. The dialogue itself was long, tiring, and cumbersome to read and I found myself yearning for the issue to end.

The artwork was a step up in quality from the writing, albeit relegated to the scenes actually featuring Magneto. There are several instances during the exchange between Ultimate Nullifier and Magneto where there were some nice, dynamic elements in Dragotta’s pencils. Examples include the panel that shows Magneto tearing the room’s wall down and a later page where Dragotta draws a fight scene between the two testosterone driven alpha males where a “wak” is drawn to mimic the impact of Nullifier kicking Magneto in the face. Nullifier flips backwards and lands directly into a martial arts stance, depicted perfectly inside the confines of the letter “k”. It does look fairly cool. However, the artwork otherwise fails to impress. Many of the characters’ physiques lack dimension and detail and are altogether cartoonishly uninteresting. 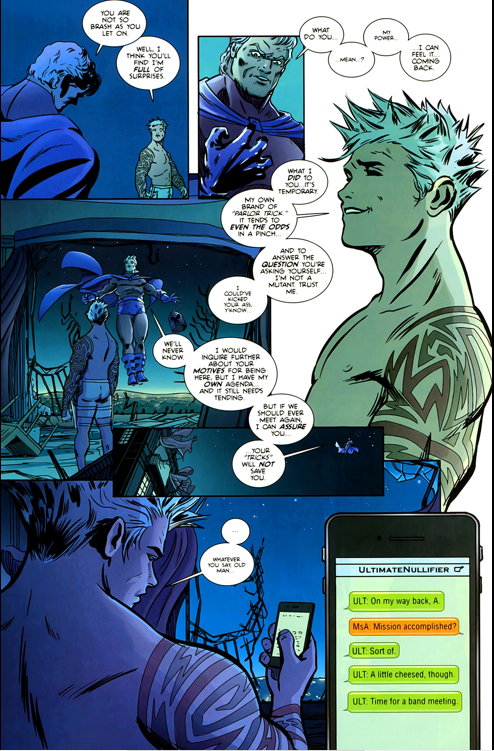 With a name like Vengeance and Magneto on the cover I expected more from this title than I got. Instead of a good story featuring a great character, I discovered a messy and unfocused first issue that failed to hook me in and force me to want to read the second issue when it’s released. At no point was I clear as to what was happening in the story, while the dialogue itself felt overbearing and too much like an extended monologue. Although the art was good in spots, I was altogether not impressed with this effort and would suggest steering clear of it. The premise of exploring the younger generation of Marvel’s villains is interesting, but is executed poorly.