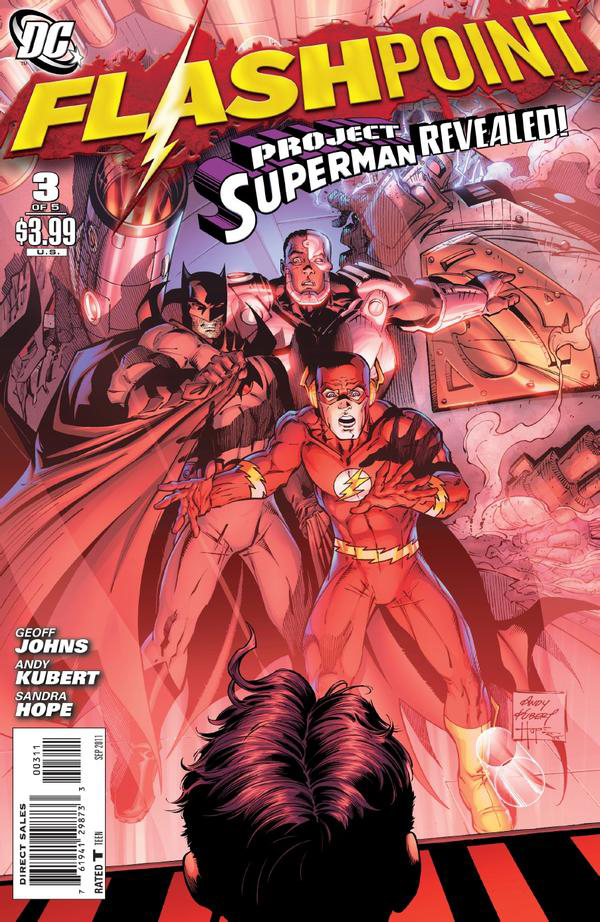 Issue three of Flashpoint sped onto shelves last week, and after an issue in which Barry Allen appeared badly injured, fans were left to wonder of his fate. Would this be the end of Allen, or would he return in a flash?

One alteration to the time stream changed everything for Barry Allen, better known as the Flash. After waking up to find his life, as he knew it, turned upside down by Professor Zoom, Barry races off for help wherever he can find it. Now scrambling to put the pieces of this mystery together as fast as he can, Allen tries to solve Zoom’s rubix cube before it’s too late.

Still recovering from his attempt to regain his powers, Allen lays wrapped head-to-toe in bandages deep within the lair of Batman. After explaining how his memories are slowly reorganizing according to Zoom’s alteration to the time line, Barry asks Batman to help him back to the chair outside Wayne manor to attempt the experiment once more.  Tense moments pass as lightning strikes a waiting and prepared Allen who regains his connection to the Speed Force. Aided by his powers, Barry quickly heals his body and runs off to make a new red costume for himself out of the materials in the Bat Cave. Batman and Barry browse the latest world news to find both Hal Jordan in the headlines along with Metropolis being attacked. Before long, Flash and Batman decide to meet up with Cyborg who takes them through a government facility to find Superman. Upon breaking him free from his red sun U.V. prison, the heroes flee despite the security personnel being hot in pursuit. Superman accidentally fires his heat vision at the guards and flies away, leaving Barry, Cyborg and Batman at the mercy of a mass of government agents.

The issue quickly resolves the cliffhanger ending from issue two and puts Allen figuratively and literally back in the high-speed saddle again. I like that Allen didn’t immediately gain his powers back and I’m enjoying the dynamic between Thomas Wayne’s Batman and Barry. The book remains an intriguing story as we gradually find out more of what Professor Zoom has done to unravel Allen’s life further than he ever has. I feel like the story has installed some pretty strange twists between the revelation of Batman’s identity to the latest reveal of a lanky, weak, frail looking Superman subdued by red sun U.V. rays. The altered time line has allowed Johns to play with established DC characters in his own little sandbox and it’s worked thus far and makes the plot development on its own inherently unpredictable, despite predictably leading into the company’s relaunch.

Andy Kubert continued to offer some fantastic pencil work in this issue. From the first to last page, his pencils awed and amazed their way from each panel to the next. I felt his early work with a badly burned Allen at the beginning of the issue was tremendously well drawn, which coupled with Sinclair’s colouring, presents jaw dropping artwork right out of the gate that doesn’t let up throughout the issue.

I also felt the panels where Batman and Barry meet Cyborg in the rain filled streets of Gotham were exquisitely penciled and coloured, displaying the falling raindrops splashing off Cyborg’s shoulders and head. The preceding pages from their initial meet only display greater depth of detail with the rain dripping down the character’s faces. Amid the other fantastic work in the issue, the art team put forth another great issue of visuals.

The strongest points of this series is the inherent openness of storytelling it promotes, allowing Geoff Johns to do what he does best and tells stories freely without having to worry as much about maintaining continuity. This has been a plus for the series thus far, and combined with the story’s greater mysteries, an engaging storyline has been created that’s accessible to both older and more recent fans. My one concern is that it fees like the series is running at too fast a pace, jumping from plot-point to plot-plot. At three issues, we’re more than half-way through the series, yet I feel we’re not really any closer to figuring out what Professor Zoom has planned. As a result, I feel like the series’ creators may rush the final issues. Although the series has been mildly entertaining and put together to this point, I worry the payoff may ultimately be lacking. I simply don’t feel like two issues will be enough. Regardless, issue three was a good installment that moved the story along and helps build the plot and character arcs moving forward into the DC relaunch.