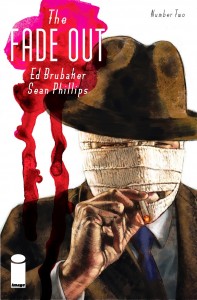 You want my recommendation on Image Comics’ THE FADE-OUT #2? Who’s askin’, see? Lemme give it to you straight. I’m not gonna pussy-foot around with you palookas:

I’m crazy about it. It’s got me singin’ like a canary. And apparently, talkin’ like I just escaped a Shell Scott novel.

That’s the effect ED BRUBAKER has on me.

Confession time. Yeah, you heard me. A confession. Like it was just beat out of me by a couple of screws down at Precinct 26. I didn’t become a Brubaker fan from his comics. I fell, and fell hard because of a…podcast.

I’ll never forget when that podcast walked into my office…er, uh, MP3 player. It was pure temptation on ice and– 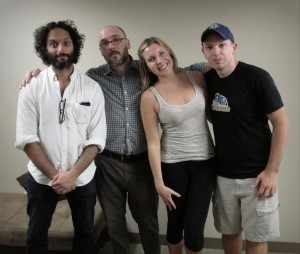 I’m a big fan of the podcast HOW DID THIS GET MADE with Paul Scheer, Jason Mantzoukas, and the 99.99% perfect June Diane Raphael. Every week they take on a truly horrible movie and revel in its ineptitude (Some of them aren’t even Nicholas Cage movies). Others try to do this, but NOBODY pulls it off like the HDTGM crew.

On episode #75 they set their sites on “Daredevil”. And their special guest was Ed Brubaker.  Makes sense. Brubaker is KNOWN for his work on Daredevil, along with a few lesser known comic book characters like Batman, Captain America, the X-Men… you know, just a rung or two up the ladder from Brother Power the Geek and Forbush Man.

Brubaker was funny, insightful, informative and all-in-all, sounded like someone you would want to hang around with and swap stories. I don’t really run in those circles much, so swapping is not an option, but I realized I could meet the proposition halfway, and consume his stories with a quick trip to the comic shop.

Brubaker along with his cohorts SEAN PHILLIPS, ELIZABETH BREITWEISER, and DAVID BROTHERS (Yeah, YW2s throws out some editor love!), have made a great veal tetrazzini here. 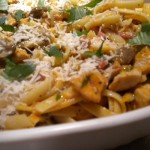 I’m talking five-star veal tetrazzini, with real butter, a nice bouncy sherry, and fresh mushrooms. How could anybody not love THAT?

But there are some people who say they don’t care for Veal Tetrazzini.

It doesn’t take Philip Marlowe to figure out that Ed Brubaker loves hard-boiled detective stories, and tales of Hollywoodland. No, that’s not a spellcheck mistake; The HOLLYWOOD sign, used to be HOLLYWOODLAND, and was put up to promote a housing development, a fact I learned from THE FADE-OUT.

Which is one of the things that makes this series great.

It’s set in Los Angeles in 1948. It’s a murder mystery that traipses through the back alleys and backlots of the still-young motion picture business.

That’s it. No more plot for you. I’m cutting you off. Plot synopses are for suckers. And I would hate to hijack even the slightest twist and turn in this tale.

It is a tale that unspools like a great crime film, with photographic credits at the beginning and even lobby cards on the back cover. It has a nice CHINATOWN feel to it.

But this is not an homage. Noir films in the 40’s and 50’s were pretty straight forward in their story, following a very linear progression of time. Brubaker takes advantage of more modern techniques, using flashbacks and other devices. 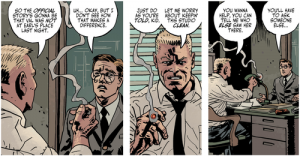 The same formula follows with the art. Phillips lays it out in a pretty straight forward style, but that only heightens the contrast when he DOES toss in something out of left field. He draws great faces, too. These characters are the actors in Brubaker’s story and actors do 95% of their acting with their faces. And thank you, Sean Phillips for rendering the faces without copying an actual celebrity’s REAL face. The characters in THE FADE OUT are familiar, but not identical to the real denizens of Hollywood in this era.

I also have to say the addition of Breitweiser to their creative partnership was genius. Color is actually an important story-telling device here. Most of the time, colorists are like umpires in baseball. You don’t notice their work when they do their jobs right. But Breitweiser doesn’t lay things out to match skin tones or color palettes. It’s more like theatrical lighting, using color to heighten mood and draw attention to visual elements. For instance, there’s a difference in Issue 1 and Issue 2. Her colors are not as precise. Tints and shades slip outside the lines. As the story gets more and more out of control, it feels like the colors do as well. That is remarkable. 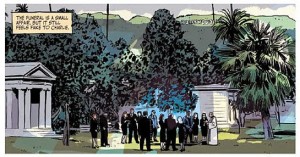 The whole package is remarkable. It is that rare bird: a period piece that doesn’t feel like a parody piece.  This is no DEAD MEN DON’T WEAR PLAID.

Whose boat will it float?

–People who enjoy a mystery they can’t figure out in the first fifteen minutes of the story.

–People who get a kick out of great dialogue

You see, a lot of those people who say they don’t care for veal tetrazzini have never had really GOOD veal tetrazzini. THE FADE OUT is REALLY good. Try a taste. 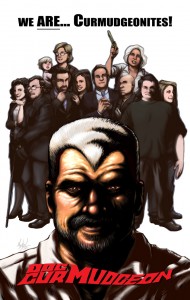