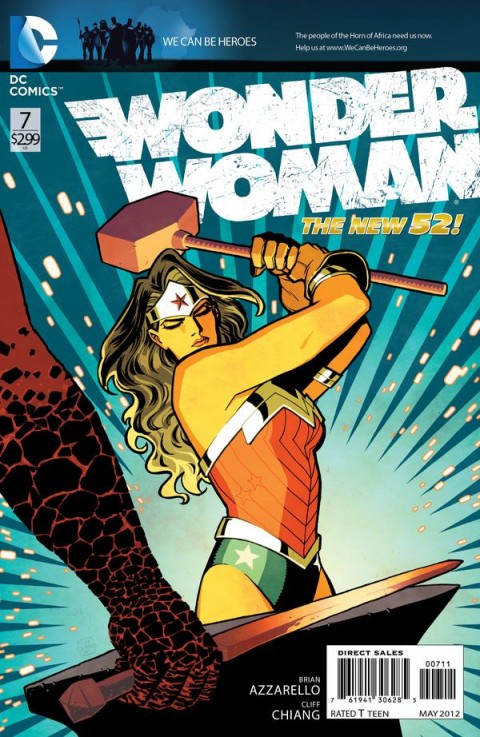 Wonder Woman has traditionally been a character unlike most in the mainstream superhero genre of comics. Where the heroes themselves are commonly viewed as gods in the metaphorical sense, Wonder Woman literally lives among them, standing beside the likes of Zeus, Hera, Aphrodite, Athena and Ares. Yet without a true antagonism the character’s series have always felt a little hollow compared to her role in the Justice League books.

When DC decided it would relaunch their line of comics last year, it was announced infamous scribe Brian Azzarello would take over writing duties on Wonder Woman. Departing from the recent stories written by Simone and Straczynski, Azzarello has opted to actively involve the Greek deities in Wonder Woman’s stories, infusing the title with more of an epic tone that over-shadows past works from the last decade.

The seventh issue of the series leaps right into the story, forgoing an always helpful introductory page chronicling previous issues. Wonder Woman and her companions succeed in their attempts to locate Eros, who had just left a club with his golden, high-calibre pistols swinging by his sides. Azzarello quickly explains Diana’s reasoning for seeking out Eros in Italy, telling him she hopes to free Zola from “the shadows.” She explains that her team seeks audience with “The Smith,” a renowned weapon forger. Travelling through a shop, Eros leads them to The Smith’s factory where hundreds of men are hard at work creating weapons for the Amazons. Upon their arrival, The Smith is attacked by an apparent creature of hell which he fights off before resuming his work. He later tells Wonder Woman a story about her sisters’ use of men to bear children, only to then kill the males before giving birth nine months after the incidents. He continued, explaining they would then discard the male babies and keep the females. The revelation of the Amazonians’ trading male children ultimately to The Smith for his weapons certainly paints a darker picture of their civilization as one that’s very sexualized, domineering and disregarding of a human life’s value.

The story peels back the layers of this corner of the DCU to reveal a very dark underside ripe with slave labour. Azzarello’s story takes a turn with the self-righteous Wonder Woman taking matters into her own hands, subduing The Smith with her lasso before throwing him throughout the walls and halls of his workshop complex in an attempt to rally the male slaves against who she perceives as their captor. Yet, we quickly find that The Smith has cared for the male slaves and they view him as a father figure. Their rejection of Wonder Woman’s gesture stabs the premise of the character right in the heart and intuitively asks a question of her moral code and its foundation of subjective rights and wrongs. For a character to unwaveringly stand by an ethic as Wonder Woman does, the final pages are crushing for her. Azzerello’s plot is more engaging than any past series, as it poses these questions to the character and fans, while injecting the story with life by delving further into Diana’s greek mythology heritage. Although an introductory page would have certainly been welcomed, Azzarello presented the story in a way that was easily understandable.

The artwork unfortunately lets the title down, save for some great pages scattered throughout the issue. There were some nice landscape shots of The Smith working in his forge which highlights the breadth of his operation for both the characters in the story and as readers, in addition to some fitting emotional panels at the end of the book after Wonder Woman’s failed attempt to free the male slaves. Chiang has his moments where he really captures the volatility of the Amazonian way of life. The dark, ominous pages are among the best the book has to offer, yet much of his art feels too bland and underwhelming for one of the company’s key titles. This in itself is a shame as the art syncs nicely with Azzarrello’s plot. The problem rests squarely in the art’s not being particularly engaging, while Wilson’s colouring leaves Chiang’s contributions dully blander than they should be. There are some great things Chiang did in this issue, however his inconsistency held the book back.