It’s easy to compile a list of things we love about comics, it’s easy because we love them.  There’s an undefined, miscellaneous feeling  involved in reading comics… an x-factor.  It feels cool somehow, as if there’s an unexplainable ‘comics-force’ available to tap into where reader’s imaginations are captured/collected and an invested emotion is recorded and acknowledged.

While it’s easy to fly the flag for comics as a comics person – the itching need to be vocal in our disappointment is an equally tempting trigger to pull.  Never intentionally aimed at the hearts and minds of the creators – rarely do our armature bullets even find a target, instead they’re more like random, cowboy-esque fragments of discontent, mostly fired across the internet.   What I’m getting at here is the frustrating reality that… comics is one of the only ‘hobbies’ that I can think of, where dedicated fans and followers buy the product religiously and relentlessly AND  regularly b**** about it to others online and in person, often a lot more than they ‘fly the flag’.

That said (reluctantly proceeding following the above), I’d like to join the ‘hate party’ for a moment and share the things I personally DON’T like in comics.   Maybe “hate” is too strong a word?!  since most of the things I say I don’t like – are actually integral in the ‘liking’… much the same as an enjoyable flaw in a beautiful sculpture, an additional and unintended reason to love it.

Bad Anatomy
I hate seeing poor anatomy in mainstream comics. Very rarely does a badly composed body bring anything to the page, other than frustration.   Some of my favourite creators are guilty of dropping the odd ‘clanger’ when it comes to anatomy.  Francis Manapul, whom is currently producing one of the best looking books in the new DCU – flash  – is an obvious master of his trade but even he is guilty of dropping the odd… ‘bad anatomy bomb’ on his pages.  The below is from Flash #6 and depicts a pretty big moment in the book, a moment spoilt only by Barry’s right leg and foot.  The rest of the page/panel is very impressive and quite strong-looking.  Flash (someone whom should have the legs of an athlete) looks all… wrong and brittle.  This type of visual is typical for Francis though, undoubtedly his work wouldn’t be the same without it… I still can’t help wishing certain panels were slightly different.  I only saw this and others like it because I love the work so much (thanks Francis by the way). 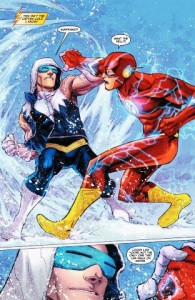 Lazy Shortcuts
I also hate seeing duplicated panels or sections.  Sometimes a head or arm looks a little… out of place, this could be due to poor anatomy again but, sometimes it’s down to the artist taking a lazy shortcut and light-boxing an old panel or section.  Jim Lee (another one of my absolute favourites) is a busy man these days – and I can understand why he might take a ‘short cut’ here and there to meet a deadline… I still can’t help be frustrated when I see it through (sorry Jim).  It’s nothing against Jim Lee or his work (obvious genius), I just wish he had the time to dedicate solely to the artwork.

During his first run on the New 52 Justice League, there were a number of shortcuts taken by Lee, probably due to the volume of other work he has on… as a ‘publisher’ and creative director on a bunch of other projects. Shortcuts are even obvious on the covers.   Issue 2 cover:- 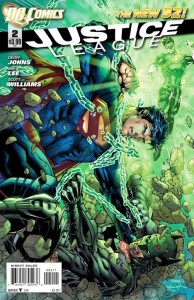 Superman’s head is from somewhere else.  Maybe an editor didn’t like the original or Jim himself couldn’t get it quite right but, it’s clearly been light-boxed from an old panel or ‘posted’ in.  His expression is all wrong for the moment, his hair isn’t reacting to the angle and the 3 quarter view is typical of a static profile.  It’s still a beautiful cover and a great thanks must go to Jim for the piece (thanks Jim :-)), I just wish it was pure and maybe more organic.  Lee is guilty of this type of shortcut in some of his older and more high-profile projects, the similarities below are tell-tale. 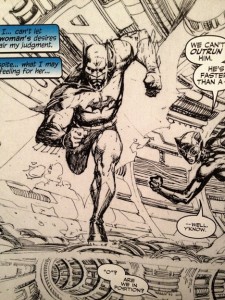 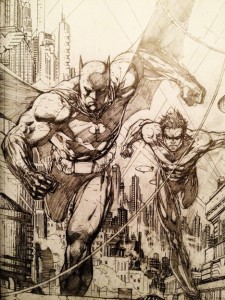 Juvenile Storytelling
Even in the flagship titles at the big publishers, the storytelling is still a bit… ‘juvenile’.  I want to read a thrilling, character driven story that’s based (loosely) in the realms of possibility – and I want the characters to be as well-defined as they could be in their own title.  These characters should have a very obvious and rewarding ‘voice’… some characters do, others do not.  While I appreciate the writers are catering for everyone, I still feel the majority of the dialog could be a touch more… intelligent in terms of its delivery.  The best characters are massively versatile so be versatile with them, but please maintain an obvious vocabulary and mind-set throughout.  Some characters dictate their speech to the writer better than others I’m sure, “what would Spiderman say?” is easier to answer than “what would Batman say?” for example.

I Want Podcasts:-
There are some great podcasts out there, most notably the Comic Culture Radio Show with Chris and Walt.   A regular podcast from the big publishers would be fun too though.  DC did have a bunch of really great podcasts available on iTunes – most of which were recorded at different comic-cons, spotlights on artists and writers with good QA with the fans etc… perfect.  They have disappeared recently however, maybe to update the logo?   Marvel used to do some really great video podcasts with the big creators and the Mighty Marvel Podcast  was fairly regular for a while.  More recently however, we get a weekly marvel Podcast… which is massively formulaic and repetitive, I couldn’t listen every  week as its predictably dry.  The Mighty Marvel Podcast seems to pop up every now and then, when Jeff Suter has the time I think, with some great interviews with creators and some interesting heads-up’s on future projects… More please Jeff.

I’d really like to see (hear) audio diaries from the creators during their current projects, I don’t mind paying for them either… just give me something inspiring to listen to on the tube.