After being stuck in limbo X-Men Legacy readers get a giant-sized mystery and a new team on a mission to find Legion’s missing personas.  The title is one of few Marvel series to have avoided renumbering and is known as the title staying honest to each characters history.

In the character-driven issue every beat of the plot flows fluidly from panel to panel in what might become the last surviving X-book.

For seven days the X-Men were trapped in an artificial reality where their minds were toyed with until beyond recognition. After defeating their captor and reverting the world back to normalcy it becomes clear everything is not as it should be. Rogue, Magneto, Gambit, Frenzy and Legion suit up to fix it. 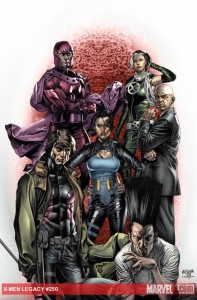 The opening scene in ‘Lost Legion’ shows a dark alley where Gambit and Xavier are communicating telepathically – their foes, says Charles, might not have minds in the normal sense of the word. Surrounded by dead or incapacitated bodies Magneto floats above surveying the damage, keeping an eye out for the enemy. The reader has to get a few pages to figure out what’s going on and where.

Legion, our main speaker in this story, tells us that Frenzy used to be a terrorist; Magneto and Rogue as well. Gambit a thief. Legion functionally insane for most of his life. This team of misfits chase a boy with glowing hands down the narrow back alleys and streets.

Flash forward to present – Utopia. Carey uses the time element to create a disjointed story but at the same time gives the reader some sort of context into whats going on. The theory? One of Legions personas caused the entire present reality to be “dismantled and reassembled” and Legions’ subselves – Endgame, Susan in Sunshine, Chain, Time Sink, The Bleeding Image and Styx, have vanished.

Xavier claims full disclosure and tells Cyclops, who sends the team to Europe to clean it up. Rogue has one last thing to do before she leaves.

In ‘Flashback’ Carey keeps the reader on their toes by not setting up the context before delving into the story. Luckily we remember Rogue had something to do before the team departed in ‘Lost Legion’, this way Carey sets up context, continuity and character development.

The reader is introduced to a translucent Rachel Summers with her red hair and big green eyes. Rachel says she needed to talk to Rogue, she was the only one who’d go do her a favor and read her to locate the missing Starjammers, all of which appear to be dead. 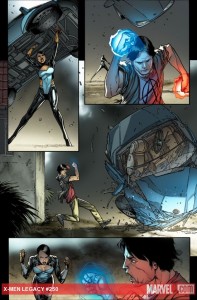 Kurth’s representation of Rogue was excellent. He draws Rogue as womanly, yet girlish, especially in her face. I like his treatment of giving her a long, slender body. His treatment for Rachel was similar in that her gams went on forever with her feet floating  just above the air. I personally enjoy an artist who creates a strong womanly figure but leaves the body builder rippling muscles at home.

Pham’s fight scenes contrast Kurth’s lanky, beautiful women in steel, gray and dark rooms. Pham’s characters have a lot of movement, flash and fight in them. While not every character’s face is given the attention it deserves the panels keep your eyes moving and our hero’s are both recognizable and doing what they do best – being superheros using super powers.

This comic ultimately does what comics intend to do – entertain and get the reader interested enough to pick up the next issue. On the brink of Schism and all things new it grabs the reader and takes them for a ride.

With all the other X-titles changing and an alleged divide between Cyclops and Wolverine brewing, this may be Xavier’s only title.  It’s also interesting to see the development of the Magneto/Rogue relationship, especially when it’s right in front of Gambit.

It’s also a toss-up whether Frenzy is on team X or an agent for someone else. Sometimes claims of redemption work really well as a guise to get closer to your target and Chuck’s been Frenzy’s target twice. Only time will tell.