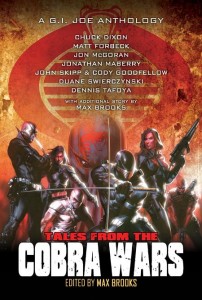 In the summer of 1989 I was sitting in my room, with pad and a pen, writing out what I had hoped would be the greatest piece of G.I. Joe fiction ever.  After two paragraphs I got bored. So unfortunately that book was never written.  Now I don’t have to worry about trying to write a story about G.I. Joe, since IDW has released G.I. Joe: Tales From The Cobra Wars.

Cobra Wars is an anthology about G.I. Joe’s battle against Cobra.  It features 8 short stories and novellas from various crime and thriller writers, including current G.I. Joe writer Chuck Dixon.  The book is edited by Max Brooks (G.I. Joe Hearts and Minds) who also contributes a story of his own.

Each story is set in a different location.  One story is set in Paris; another in Russia in a cold war era bunker; Route 66 is another location; a secret military installation in the desert is the setting for a battle against technology.  Each story features different personel for each mission as well.  Certain characters are featured in multiple stories.  For example Duke and Scarlett show up in multiple stories.  For the die hard G.I. Joe fan, some obscure characters are used as well (ie: DeeJay and Skidmark) and some new characters are created (unfortunately for them, they are “red shirts” – Star Trek reference).

A few of the stories are a continuation of previous ones.  For example on the mission in Russia, Duke, Scarlett, Barrell Roll and Brainstorm are ambushed by their own “Robot Joes”.  Brainstorm figures out how to defeat their own technology.  In a later story, Duke needs Brainstorm’s help investigating secret technology, hidden inside some black market weapons.  The events from the Russian story are referenced in the later story.  Also, the arms dealer from that story is mentioned in another story, about another weapons dealer.

Some of the stories were written really well, with fast paced action and suspense.  Other stories were about subject topics, that I had a hard time relating to.  The stories I enjoyed the most were, Skidmark’s drive along Route 66, being chased by a Cobra agent; Flint and Scarlett fighting against robot drones controlled by Cobra Commander; and Max Brook’s story about a combat psychiatrist, growing up in the 80’s and befriending a Vietnam veteran.

I do have a couple complaints about the book (but they are very minor).  For a book called Tales From The Cobra Wars, they only fight Cobra in a couple of the stories.  The only Cobra’s featured in the book are Cobra Commander, Destro, Baroness and Major Bludd.  I expected the stories would be large scale skirmishes between G.I. Joe and Cobra.  Instead the stories were small, clandestine missions where G.I. Joe were completing their objectives (kind of like an episode of The Unit).

My other complaint was about one particular story.  It was very hard to read.  The story featured Dial-Tone.  If you remember the character from the 80’s, his name was Jack Morelli.  When IDW acquired the rights to G.I. Joe they introduced a new Dial-Tone character that was female, she was featured in the Rise of Cobra videogame.  When her action figure was released, her real name is Jill Morelli.  Some biographies of her mention that she is Jack “Dial-Tone” Morelli’s sister.  Now back to the story in Cobra Wars; Dial-Tone was working with Duke.  As the story progressed, sometimes Dial-Tone was referenced as “He” and sometimes “She”.  It became very confusing to read.  I don’t know if the writer had one version of the character in mind, then it was changed in editing, or what the story was. 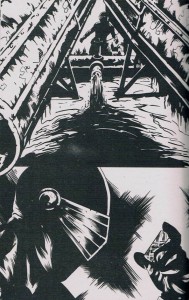 Cobra Wars has an amazing cover by Gabrielle Dell’Otto, and black and white art by Michael Montenat, who is a relative new-comer to the comic world.  His Snake Eyes artwork is different from versions (it just looks cool).  I can see him working on other G.I. Joe books, and will keep an eye out for him in the future.

Overall G.I. Joe Tales of the Cobra Wars is a must pick up for any G.I. Joe fan (or anybody who likes to read).  Hopefully this will lead to more G.I. Joe fiction in the book stores.

For all you G.I. Joe fans (and convention fans), this weekend (Saturday June 18) is the Canadian G.I. Joe Convention.  This is a great convention.  It is at the Sheraton by the airport in Toronto.  Ron Rudat, Mark Bellomo and Valentine DeLandro are some of the special guests.  I will definitely be there.  If you see me walking around stop by and say hi. 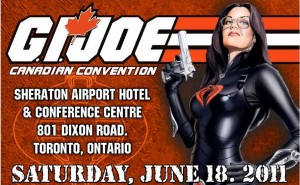