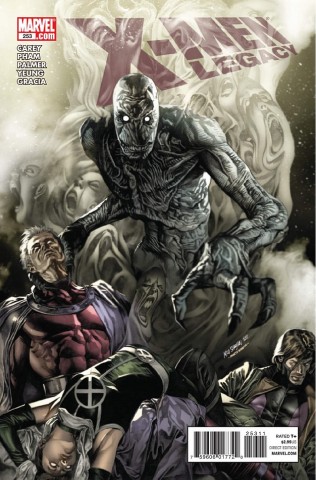 This week we’re taking another look at X-Men Legacy as the current arc wraps up, bringing Legion’s arc to a close while setting up a future storyline for some long lost X-Men. Let’s have a look, shall we?

Legion is joined by Magneto, Gambit, Rogue and Frenzy, and together they’ve travelled around the world to Paris where they attempt to recapture the mutants who have escaped Legion’s consciousness. Their mission? To stop the escaped personalities before Styx is able to hatch his endgame.

Deep in the catacombs underneath Paris, the X-Men unsuccessfully attempt to fight off Endgame while Styx takes Legion and subsumes him into his own consciousness. While Frenzy, Gambit and Magneto continue their fruitless exploits, one of their teammates arrives to even the score, much to Endgame’s confusion. In Styx’s arrogance, he quickly understands the X-Men’s deceptive tactics, revealing Rogue to have taken Legion’s ability to make copies of himself and masqueraded as him to Styx. Rogue releases each of the consciousnesses taken by Styx using her own power, but once he tries to take Rogue, Legion calls him back despite refusing to let go of Rogue, causing them to be taken together into Legion’s mind together. Xavier goes in to separate them, but finds that Rogue has tapped into all of Legion’s powers to discover where the Starjammers are located. Now privy to their location, Rogue, Gambit, Magneto and Frenzy teleport using one of Legion’s powers deep into space, only to be held at gunpoint upon arrival.

I’ve truly enjoyed this arc of Legacy. Carey has returned to form after questionable arcs last year and delivered a solid story hinging on the relationships that bind each of the primary characters together be it romantic, friendship, mentorship or simply the bond between father and son. Playing off that I felt like the story nicely transitions into the arc that will likely reunite the X-Men with their friends last seen during the Rise and Fall of the Shi’ar Empire story where Havok, Polaris and Rachel Summers were lost in space during a mission. Focusing more on this story arc, I thought pulling the switcheroo with Rogue and Legion was a nice tactic and played well against Styx’s arrogance. The writing definitely feels like it’s back on track.

Pham and Gracia provided some stunning visuals throughout the issue. The first few pages especially feature some nicely drawn action as the X-Men fight off Endgame, each using their array of powers to try and bring down the armoured giant. The art team provided some great work displaying the use of the resident X-Men’s powers and how none of them were working against their foe. Frenzy wildly swung a rectangular stone block only for it break and crumble to the ground in pieces. We find Gambit throwing a barrage of charged cards to little avail as he leaps into the air, while Magneto confidently walks towards Endgame believing his powers will undo his adversary; he’s promptly smashed into the ground thunderously in a great panel that kicks up dust all around them and shakes the very earth they stand on. I also thought the varying pages featuring the inside of either Styx or Legions minds were nicely drawn and beautifully created with differing tones of blue ranging from a blinding blue and white light to a starry night sky with blue-ish hues. Altogether great work from the team.

After a lackluster arc last year which brought the setting to India and an Age of X story which I skipped over, my return to Mike Carey and X-Men Legacy was a good one. This story arc focusing on Legion was very interesting, while also working in Frenzy whom from what I understand was one of the central characters in Age of X and is now looking for redemption. This is very much a back-to-basics arc in that it reminds me of past arcs where the casts weren’t static necessarily and were always giving new characters the opportunity to shine or one’s that otherwise wouldn’t see much panel time. I also like the composition of this team and the ever boiling love-triangle between Gambit, Rogue and Magneto. Those elements aside, I like the team Carey is using and felt their powers worked well together. The team is set to perhaps expand with the next arc as the “X-Jammers”—Havok, Polaris and Rachel Summers —appear set to come home and perhaps have a featured role in ongoing Legacy arcs. There’s no telling what Carey has planned for sure going forward, but if this issue (and arc) is an indication then I believe the series is back on track.