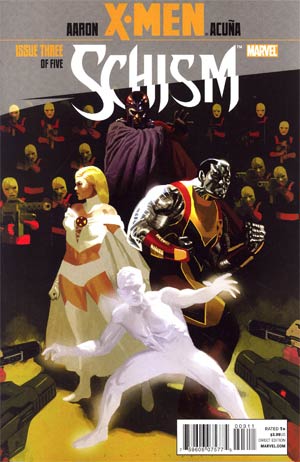 A great divide looms for the X-Men, and its impacts are expected to be felt throughout the mutant ranks leading to a definitive split into separate factions. The question is, considering we know the outcome, what happens such that the X-Men fracture right down the middle? Schism chronicles the journey towards the split, and with the release of the third issue last week, we’re one step closer to understanding the beginning of the X-Men’s collective future.

The new Hellfire Club has arrived, and they’ve not yet hit puberty. Lead by Kade Kilgore, a group of young children well-versed in how to defeat the X-Men has emerged from the shadows and are intent on the systematic destruction of the mutant race. With a museum intended to celebrate mutant history on the verge of being unveiled, the new Hellfire Club prepares to make its move against the mutants, in what may be their last stand.

Despite an ongoing threat from a new enemy, the X-Men continue with their plans to attend the grand-opening of a museum dedicated to mutantkind. With Ice Man, Emma Frost, Magneto, Colossus and Namor serving as the public face of mutantkind for the night, Cyclops believed his best and most capable to be suitable to ensure everyone is safe for the occasion. That’s hardly the case as the young upstarts quickly overtake the present X-Men through superior tactics and strategy. As Cyclops and Wolverine rush to the scene, the new Hellfire Club tries to make their exit with their new captives in tow, leaving behind a bomb without realizing that Idie, one of the younger X-Men, was in attendance. Wolverine and Cyclops argue over what she should do, with Cyclops leaving the decision up to her. She successfully defeats the remaining guards and prevents the X-Men from being taken. As the elder X-Men arrive, they warn everyone to get away from the museum just as the bomb explodes. Wolverine and Cyclops continue their argument, with Logan taking exception to Idie having to kill a dozen Hellfire troops. The two go back and forth, with Cyclops pointing out that there were no civilian casualties and that she saved more than a hundred lives. Logan’s claws pop, but not of his own accord as a large, Sentinel like magnet takes shapes from the building’s wreckage.

For everything this story is billed to be, I don’t feel like the quality and pacing of the story is quite matching the hype. After three issues the story hasn’t seen much movement. The inclusion of the young Kilgore and his new Hellfire club seems thrown in as I’m not quite sure what their motivation is towards attacking the mutants; it seems to have come out of left field without a sufficient contextual set-up and we’re expected as readers to go along with that. As for the “schism” between Cyclops and Wolverine, we’re only starting to see the break down in their relationship now, albeit in a very early stage. Although it’s unlikely the treatment of young mutants as soldiers will be the sole catalyst in the break-up, it seems to be a likely contributor in the story’s larger context. Even then, considering the scope of this story and what it will mean for the X-Men going forward, I don’t feel the immensity of that scope in the storytelling. Aaron’s story has an inkling of heart, but it isn’t quite coming through yet.

Acuna’s work in the issue is very polarized, with sections that I think are marvelous contributions while I truly don’t think the detail of his characters is up to par in others. Where the latter is concerned, although he does well in drawing the characters in close-up shots, the panels which require multiple characters on the page completely lack any definition or distinguishable features. As an example, inside the museum when Namor, Emma, Colossus, Ice Man and Magneto are standing around after she receives psychic feedback, none of the five characters appear to have musculature in their bodies. Acuna’s pencils are either completely masked by his colouring, or he simply decided to draw Magneto as though he were wearing a giant multi-coloured leotard. It’s very much the same with Ice Man, who considering he’s a naked walking man of ice, he should at least have some semblance of definition beyond what he’s drawn to have. I do think, however, that the shine on Magneto’s helmet and Colossus’ body is a nice touch. While there are glimpses of good character design it hardly makes up for the bland composition throughout much of the issue.

Acuna’s stronger points appear sprinkled throughout the issue compared to his lesser ones. I liked the atmosphere he created deep in the Utopia War Room where Cyclops stands relatively alone in the dark with the three remaining Cuckoos. I liked the scant lighting on his costume contrasted against the near pitch-black room complemented by a slight hue of blue. Acuna further puts forth some great work once Magneto confronts the Hellfire children. The entire sequence of the page is fantastic from the firing of the Magnetars to Magneto’s collapsing to the floor. Acuna’s mastery of lighting and shading is exemplified again here, as the colouring of the gun’s blast envelopes the page and creates a reddish tone to the surrounding area and the face of the Hellfire child. The following panel takes a step further with Magneto completely immersed by the blast in a sphere of red electro-magnetic energy, causing him to fall; a red electric current still coursing through his body as he lays unconscious. The final notable work of the issue is the last page featuring the erection of the electro-magnetic Sentinel creature. There isn’t much to say about it beyond it being an awesome wonder.

I wouldn’t go so far as to classify Schism as a failure just yet, as I feel although the series hasn’t lived up to its hype, that we’re only scratching the surface of what the X-Men braintrust have planned. With that concession in mind, I don’t feel like the story is where it should be after three issues. The series has been altogether uneventful so far, aside from establishing the new pre-pubescent Hellfire Club to the clear dichotomy between the philosophies of Cyclops and Wolverine. I feel like the core of their differences which eventually lead to the split derived in part from the treatment of the younger mutant recruits, using Idie as an example in this book whom took matters into her hands and made a judgment call to save lives, one which Wolverine believes she shouldn’t have been in a position to make. Cyclops differs in his opinion, and despite their mutual respect that has developed, that distinction between their philosophies is apparent while the schism between them will grow from there. I still feel like the series can be a success as a whole, however the pace needs to quicken lest one of the “biggest events in the history of the X-Men” fall flat in its sputtering towards a conclusion.