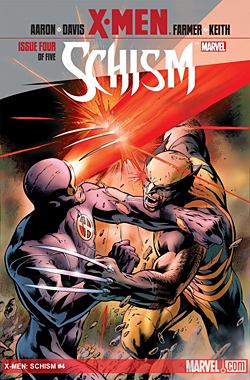 Last week the fourth issue of the X-Men event of the year was released, with tensions rising to a fevered pitch in Jason Aaron’s Schism story. This week CBD takes a look at the penultimate issue of the mini-series as round one of Cyclops vs. Wolverine begins.

The schism between Cyclops and Wolverine is becoming increasingly pronounced as they quarrel over the role of the younger X-Men in mutantkind’s fight for survival. Deciding to battle the fallout of a near international incident with good PR, Cyclops’ plan walks the X-Men’s big guns right into the waiting hands of the young Kade Kilgore and his young upstarts who christen the new Hellfire Club. In the aftermath of a bomb’s detonation, we find that the young X-Man Idie has killed a number of Hellfire goons in order to save the lives of those who remained inside the museum. Wolverine and Cyclops continue to disagree over Idie’s actions as a large Sentinel begins to form from the debris around them.

Cyclops and Idie return to Utopia in the aftermath of the Hellfire Club’s attack. Cyclops tries to assure her that what happened wasn’t her fault, taking the blame for having put her in that position at all. They walk into Hope and her young friends, who encourage Idie to come with them to get cleaned up. As they leave, Cyclops stares longingly at an old photograph of himself and the original X-Men team before walking off into the command centre for a status report. On the mainland, the fully formed Sentinel hurls Wolverine into the Pacific and slowly makes its way toward Utopia. Upon realizing this, Dr. Nemesis tells Scott of its movements, causing him to quickly run outside to the edge of the island where he fires a tremendously devastating optic blast at the Sentinel, scarcely slowing it down despite blowing a hole through it. Hope and her friends arrive behind him and offer their help, just as Wolverine finishes swimming back to Utopia’s shores. The two begin to argue over involving the younger X-Men in the battle, with Wolverine storming off to his living quarters where he changes into his uniform and wires Utopia with enough explosives to sink it. He returns to the shores and orders Hope and her young friends to tell Danger and Dr. Rao to evacuate the island, intending to blow up the mutant stronghold once the Sentinel arrives. Their disagreement boils over once the kids leave; they open up old fiery wounds and start fighting back and forth for control of the detonator as the Sentinel prepares its opening attack.

The fourth issue of the series finally gave us the showdown readers have been waiting for. As expected, the rift is centered upon the use of young mutants in the forthcoming battles. Cyclops believes they need to be part of the battle and that they can’t afford to let them sit on the sidelines, while Wolverine posits the perspective they should be kept away from the fight and allowed to be kids. This dynamic of the story injects an element of realism to the story, bringing the issue of child soldiers directly to the forefront. Despite being an obvious plot element, it throws the X-Men stories back to the classic aspects of the original comics, pitting the idealism of Xavier vs. the realism of Magneto, with Wolverine and Cyclops stepping into those roles respectively. With the two maintaining diametrically opposed positions, it serves to instigate the long-standing tensions between them, however I feel like Aaron did a poor, one-sided job of beginning the fight between the two X-Men mainstays. The transition from arguing about the Sentinel, Utopia and the children, to talking about Jean Grey was choppily written, placing that lovers triangle at the forefront as opposed to the story’s central themes. I feel like this was a poorly developed piece of the arc, and although the desired effect is achieved and the issue was altogether quite good, the execution of their fight was off. It felt more like Aaron, being a Wolverine fan, worked to make Wolverine look better than Scott instead of working to tell a balanced story.

The artwork in the issue offered a wide array of nice, well-executed moments. Considering the story, the panels featuring Cyclops staring at the photograph of the original X-Men was especially well executed. It was preceded by panels where Cyclops and the young mutants speak to each other before they walk off, leaving Cyclops with the weight of his decisions bearing down on him. I liked the actual pencil work with the photo in the foreground as we peer over Cyclops’ shoulder, followed by a more focused drawing of the elder Scott looking at his smiley, younger self, contrasted by a more stoic expression on the face of mutantkind’s leader. The work featuring the new Sentinel is fantastic, with dozens of pieces flying throughout the pages with electricity enveloping the scenes as the X-Men try to fight this new Sentinel model.

The artwork featuring Cyclops steals the show once more though, as Davis created an amazing sequence of panels where Scott attacks the Sentinel from Utopia’s shores with a defiant, angered, exhausting blast across the bay through the Sentinel’s chest. As good as it is, this hardly matches the final pages of the issue where Wolverine and Cyclops finally have their showdown, as tempers boil over with a thunderous blast of energy that embeds Wolverine into the Utopian soils. The two go back and forth as the page’s colours are showered in red energy, every kick, punch and dirty move captured brilliantly. The issue culminates with a great series of pages featuring the two mutant leaders fighting over the detonator, Wolverine’s drawn claws rapidly approaching Cyclops who blasts Wolverine’s arm. Beyond these great pages, the issue also featured some nice touches, such as altering the tone of Cyclops’ visor where his eyes would be. I was altogether impressed by the artwork, as it was a wonderfully drawn and beautifully coloured issue.

Nearing its conclusion, Schism is hitting its mark as a whole. The cause for the divide between Scott and Logan was very obvious from the beginning of the mini-series, which although detracting from the total experience, the connecting points of the plot maintain their attention grabbing qualities. In the end the major selling point of the series is not necessarily the schism itself, rather it’s the anticipation of the Wolverine and Cyclops showdown and all its historical tension over a wide range events. The intrigue rested within the inherent wonder of how they come to be at each other’s throats, rather than the story itself where the cause seems secondary. I feel this could be where Aaron failed in his execution in this issue, as it feels like the plot takes a back seat to those tensions, making it more about them than the kids. Although the issue of mutant child soldiers is the instigating factor, it doesn’t feel that way as they argue back and forth to the point where it’s Scott who brings up Jean, and after a Wolverine retort, the two engage in fisticuffs. Although the issue is very good and moves the series further to its completion handsomely, knowing Aaron is also the Wolverine writer, the dialogue and script feels very one-sided and it’s to the extent that the plot is distracted. Even still, with one issue left and part two of the Cyclops-Wolverine fight to come, the series is ready to finish on a strong note despite this issue’s hiccup.