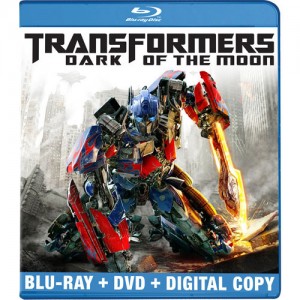 This installment of the Transformers franchise has the Autobots fighting against their nemesii Decepticons and a former ally.  Aiding the autobots are Sam Witwicky, Capt. Lennox, (Former) Agent Simmons and new addition Carly (portrayed by the beautiful Rosie Huntington-Whiteley).

Transformers Dark Of The Moon proved to be a powerhouse this year at the box office.  The worldwide box office for the movie was $1,117,966,650 (source Box Office Mojo), which makes it #5 on the All-Time Box Office List (surpassing even The Dark Knight), and the most successful Transformer movie yet.

The special features for the Blu-Ray are unconfirmed at this time.  A 3D combo will be released in the future; the release date has not been confirmed.  Transformers Dark Of The Moon is a must buy for your Blu-Ray/DV collection.