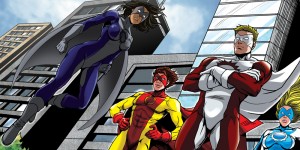 So you have your eye set on SUPERNOVAS #2 have you? Well, let me start off by telling you that it is an Award-Winning Dish.

Unfortunately, the award is Worst Book of the Month.

This 24 pages of abject misery comes to us from RED GIANT ENTERTAINMENT and I am sorely tempted to put quotes around “Entertainment”. The only thing entertaining about this book would be how many times you can throw it across the room before the staples come loose and its pages flutter around the room like wounded birds.

The only thing this book has going for it is an amazing synergy between writer and artist. They come together to form some of the poorest visuals and story ever seen by Modern Man.

The dialogue is stilted and tired. No one talks like this. NO ONE. Siri talks in a more natural style than these characters. And the style is best described as Run On Sentence.  Attempts at making the characters sound hip fail miserably. A reference to ENTOURAGE is followed four panels later by a reference to F-TROOP. Really? What is the demographic here? 20-somethings who figured out to unlock HBO on the cable box..and octogenarians?

Somebody missed class that day in Art School when they talked about Proportions. From panel to panel, characters can go from golf ball-sized heads on Clydesdale-like bodies to huge, misshapen melons precariously balanced on torsos like you find on HERO-CLIX.

The writer and artist are seldom on the same page, even when they’re on the same page. A super-baddie flies into a perfectly clear sky, and a second later slams into a giant building that apparently leaped out of thin air. A scene that begins outside a school, continues a second later inside a crowded school hall, without a single BAMF.

Combine this rather cavalier attitude towards time and space with the artist’s reluctance to draw faces and the writer’s inability to write attributable, cohesive dialogue and you get this:

Either that dialogue is coming from the blonde guy’s shoulder OR Cousin ITT from the Addams Family in the bottom right hand corner. That MIGHT be the back of somebody’s head, but…NO. Who in their right mind would do something like that?

I always try to find something positive to say in ALL my recommendations. So I will say that SUPERNOVAS #2 is occasionally funny. Probably not intentionally. The wittiest dialogue in the book is “IIIEEEE!” which is used three times, I swear to God. And speaking of unintentional, can anybody tell me what the hell is happening in THIS mess?

I think I just SPLOOSHED too.

I will give them the benefit of the doubt. This is cover-dated 2011.  Perhaps this was a clerical error on Red Giant’s fault. Some functionary hit the “NOW RELEASE” Button, when they meant to hit the “NEVER RELEASE” Button, and it magically showed up as a new book in Comixology.

I give this : ONE BAD BANANA