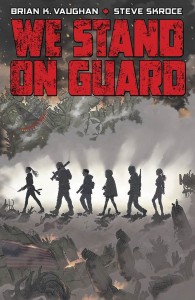 Today’s Special: We Stand On Guard #2

When I was a kid I loved “The Swamp Fox” which ran on Disney’s “Wonderful World of Color”. It starred Leslie “Lt. Frank Drebin” Nielsen as Revolutionary War Hero Francis Marion. Marion was an American military leader who opposed the British occupation of South Carolina. The Swamp Fox adventures were action-packed and colorful (as a matter of fact, it’s the first show I can remember watching on my family’s new color TV). Each installment would center around Marion and his band of soldiers, slipping in and out of the cypress trees, outsmarting and out-fighting the redcoats.

Even as a little tyke –with sun-tanned cheeks and tousled blond hair–I was canny enough to think “Man! I bet people in England don’t like this show”.

Jump forward half a century and regard “We Stand on Guard” #2.

Once again, one oppressive nation occupies another, and brave freedoms fighters –like Swamp Fox and his pals– do battle against the evil forces. Except in this case, the occupiers are the United States and the valiant guerilla fighters are Canadians trying to take back their country.

In what has to be payback for the terrible John Candy film “Canadian Bacon” (directed by Michael Moore btw), We Stand on Guard is two issues in and every single American has been portrayed as amoral, sadistic bastards who never met a man, woman, child, octogenarian, or pet they wouldn’t abuse, torture, or kill.

Is it satire? Political commentary? Revenge for the War of 1812? Don’t ask me, ask writer Brian K. Vaughn. Maybe he can explain the biggest problem I had with this title:

How can a comic with giant mechs, coyote/wolf hybrids, and cities blasted into nano-particles be boring?

Whenever Super Chicken’s sidekick was blown up, beaten up, or just general messed up, S.C. would tell him: “You knew the job was dangerous when you took it, Fred.”

Going in, I knew the premise of “We Stand on Guard”, but I figured a writer as good as Vaughn would weave a tale that would intrigue me and interest me plot-wise.

He paints with too broad a brush. All the bad guys are such one-dimensional goose-stepping bastiches they aren’t interesting. All the good guys are so brave and noble and… cool… they are just as vanilla. And it doesn’t make any difference which country they hail from, they would still be predictable and boring.

And so many story points are telegraphed from a mile away.

At one point, I thought “We’re going to have a shower scene with the nubile female lead protagonist and somebody watching her.” Right on schedule, one page later, it appeared, strategically-placed suds and all.

If I can finish a dialogue balloon in my head before I am halfway through the aforementioned balloon’s content, that’s a bad sign. And that happened over and over and over again.

To be fair, the story is only a third of the way completed. There may be amazing plot twists and breath-taking character reveals coming that I can’t imagine in my wildest Taco Bell-fuelled dreams.

But I don’t care. I’m not a psychic. I can’t judge a book by what might or might not happen in the future.  I gave this book my hard-earned dinero for two issues, and I gave my time to Vaughn, and Steve Skroce and Image Comics to wow me to the point I would continue to buy this comic and/or recommend it for your pull list.

So to all you people in England in 1959-61, now I know how you must have felt about “The Swamp Fox”. I bet it was a knife in your National Pride, and I bet it offended you as much as this comic offends me.

Make no mistake. I am old-school enough to be insulted by this book. I happen to believe in this country, and (Here it comes) Love it. And nothing printed in a comic book is ever going to change that.

There you go, “We Stand On Guard”. There’s your Get Out Of Jail Free Card. You can point at this review and say “Of course he didn’t get it! He’s some flag-waving throw-back! This book isn’t meant for him!”

I give “We Stand On Guard” #2, one Timbit (Because the mechs are cool)