No doubt, you’ve seen some of the pictures we’ve taken at this years TCAF, but let’s take a little closer look at some of the cool stuff that went on. 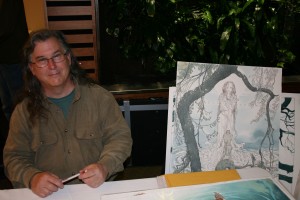 Charles Vess was sitting at the Beguiling Signing area on the second floor of the Toronto Reference Library graciously signing copies of his work as well as providing some interesting information on his career. Turns out that he’s not a huge fan of Marvel given that even though he write and drew Spider-Man Spirits of the Earth and it sold over 10,000 copies, he saw no royalty money! Charles had a number of pages from his Blueberry Girl and some preliminary art from his upcoming project’ The Green Wood. A massive text-heavy work with some illustrations thrown into the mix. Shortly after the day started, Charles Vess was at a Spotlight even that was a narration of his career…narrated well by him! 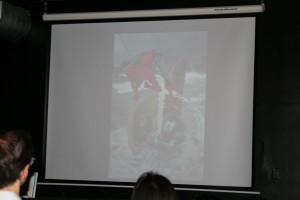 At the spotlight, Charles revealed a number of interesting things like; there are a specific number of Spider-sense tingles that are supposed to be presented when it goes off, Howard-Norton paints aren’t really that great since the colors fade and customers will come back to you asking to repaint the thing and finally, the cover to the latest edition of Stardust is in the posession of Clare Danes as it was gifted to her when she was having a bad day on the set of the Stardust movie! 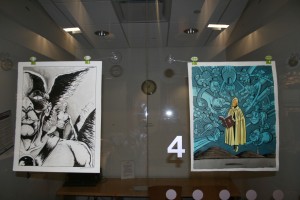 I wish I had taken more pictures of these pieces…I’m an idiot, but I’m getting ahead of myself a little bit here. These prints of original art that were taped to various glass doors are pieces that are being auctioned off to benefit the Doug Wright awards with pieces being contributed to the auction by people like Jeff Lemire, Seth, Chester Brown and so many more. The auction can be found here. Look at that amazing Catwoman piece. It must be mine! 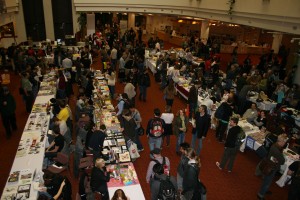 The festival was just packed all day long. This picture was taken from the second floor overlooking the main hallway just right after the festival opened up! 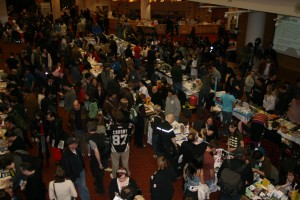 And the mass just grew and grew! 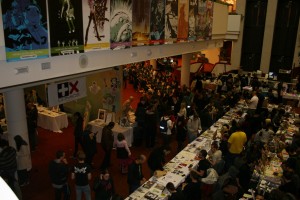 The Transmission X Crew was out there in force and was one of the huge attractions of the show. When you got guys like Cameron Stewart, Karl Kerschl, Ramon Perez, Michael Cho and Eric Vedder in one contained space, there’s just too much awesome to be contained. The Transmission X-Guys had their own alcove to set up shop with a great number of original pieces, prints and sketchbooks available for fans to pick up. 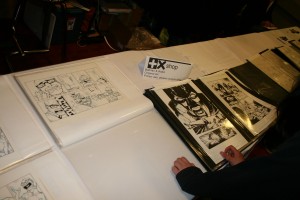 There were some great pages from Cameron Stewart’s run on Batman and Robin, Eric Vedder’s Darkstalkers issues as well as tons of great miscellaneous pieces by Perez and Cho. 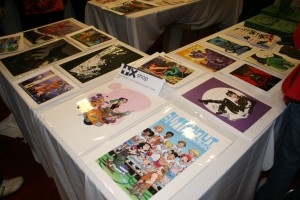 Lots of great prints and books to pick up by the T-X guys. In fact, your truly picked up the debut release of volume 1 of The Abominable Charles Christopher by Karl Kerschl. The book which came bound in a felt-like material was being sold for 40 regularly or 60 with a sketch. 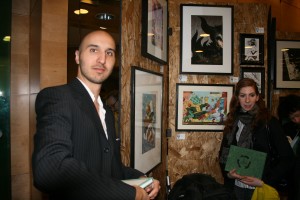 Hey in fact, there’s Karl right there doing the sketch in my book! I’m not a dwarf, I just bent down to pick up some papers a lady dropped. I also would like to state for the record that my head is not anywhere near Karl’s crotch despite what this photo looks like! 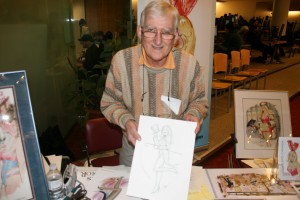 Famed Playboy Cartoonist Doug Sneyd was also in attendance. He’s holding up my very own comission of Zatanna! Funny story that Doug told me. Everytime he finishes an art piece for Playboy, he takes a photo of it and sticks it into a photo album that he takes around to shows since he’s constantly worried about the Fed-Ex people losing his originals! Look an artbook of his stuff sometime next year. 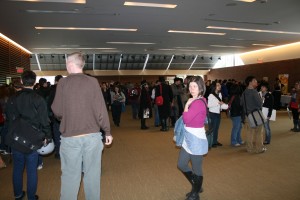 The Webcomics guys were set up on the second floor in a large open space where a crush of webcomic fans filled the room to the brink to meet their favourite creators as well as pick up some pretty sweet souvenirs like Mario Cloud socks from the guys at Diesel Sweeties. 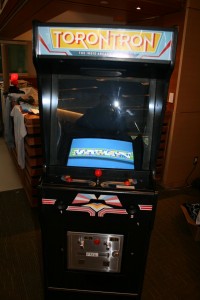 This awesome arcade cabinet is by the Toronto Handeye Society that has been modified to run six different custom games created by local videogame authors. 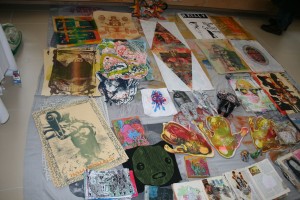 Beyond the webcomics guys was the Small Press Pavillion which brought out the artsy fartsy in the comic fan. Check out some of these creative pieces! 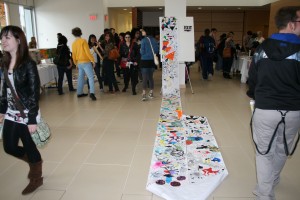 Well, that’s what I saw on Day 1 of the TCAF. Stay tuned for Day of of CBD’s TCAF coverage!

David Diep is the News Editor for ComicBookDaily, a weekend manager at Big B Comics in Hamilton, Ontario, professional pasta eater and once divided by zero.