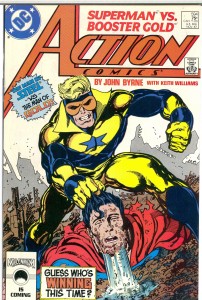 The Cover: Booster Gold; the used car salesman of the DC universe is laying a pounding on Superman it seems. He’s smushing his face into the mud while Superman’s chin apparently has a water faucet in it judging by the amount of water spewing from it. Maybe Booster Gold slit his throat and Superman bleeds water.

The Story: Our tale of epic Booster Gold bad-assery (is this even a real word?) kicks off with Superman visiting Batman in Gotham City in order to get his help in analyzing an old book as he thought the skills of the worlds greatest detective would come in handy. This also marks the first time that Superman meets Robin in the 1980’s continuity, so Robin is all giddy like a school girl and asks Superman for an autograph! Superman obviously can’t pass up this opportunity to show off and make Batman look like a tool so he picks up a tin plate and uses his finger to indent his name into it and hands it to Robin. Superman then leaps into the night air and flies off thinking about how after taking Robin as a partner, Batman has become less of a dick.

The next day, a woman who is familiar with Booster Gold is walking down the street in Metropolis when she comes across a bunch of posters put up by Booster Gold badmouthing Superman. As she comes across the poster, she notices Booster Gold flying by and hovering near a statue of Superman being set up for Superman Day. Booster Gold being the ever so awesome guy he is decides to blast the statue to pieces. Because that is definitely what you should do to avoid Superman flying down and slapping the stupid out of you.

Booster then holds a press conference where he rants and raves against Superman calling him a criminal and a traitor to the American people. If that wasn’t enough, Booster then busts into the mayor’s office where they are holding a debate about the upcoming Superman day when Booster Gold decides to lure Superman into a fight by kidnapping the mayor’s daughter! Man one day you’re shilling Coca Cola and the next, you’re grabbing women to take hostages.

To top it all off, Booster needs to grab Superman’s attention, so he begins to beat his hostage up! Man, Booster Gold must be taking lessons from Superman or something. So after giving her a thrashing, Superman shows up and they start to brawl. Superman immediately notices something is wrong when Booster Gold is actually competent at fighting for once. They go back and forth until Booster gets serious and is really clobbering Superman into a daze. But all of a sudden Booster Gold shows up! Wait…I thought Booster Gold was beating up Superman! What a twist…well no, it was super obvious that it was some imposter in his suit but I played along anyways. So the new Booster Gold shows up to save Superman and is about to join the fray when it’s…to be continued!

The Rating: 7/10: The spirit of the cover is contained within the issue, we’ve got Booster Gold beating up Superman even though it’s apparent that it’s not Michael Carter in the suit. What the biggest issue is that we don’t have the scene where Booster Gold pushes Superman’s face into the mud and turn on the water faucet located in Superman’s chin! I also honestly have no clue what the title of this story has to do with anything. What is a glister?