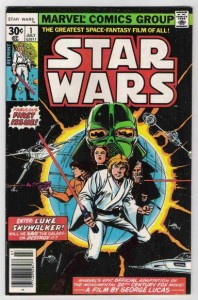 I was poking around the auction sites and noticed some very sporadic activity around the Star Wars #1 comic book.

In contrast CGC 9.8 copies of Star Wars #1 were trading for $617.00 in 2008. The last recorded sale only fetched $340.00 or only 55% of its 2008 average. I read this data as showing that there are a lot of true Star Wars fans out there willing to pick up a very high grade copy of this book perhaps as a part of a larger Star Wars memorabilia collection. The more severe drop in the 9.8 values is more consistent with the speculative crash that associates an increase in supply of something once considered much scarcer. 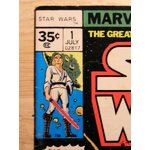 There is no GPAnalysis data on past sales of the 9.6. The book was graded in mid 2009 so I’ll assume it has not sold on market yet. Someone though is trying to sell it as of this post and in a very big way.

But wait again. Another 9.0 copy of the 35 cent variant has just been listed for sale at $4,000.00. Upon closer inspection this newest listing belongs to the same seller that sold the $5,000.00 copy and the CGC serial # is the same! I can only assume that the buyer ended up balking at paying $5,000 for a book that sold for about half that not even a week later. I could be wrong, but it does look this way.

This is crazy stuff!