The comic convention season will be upon us in Ontario this weekend, kicking off with Wizard World Toronto.  For collected edition collectors that means two things: hunting and signing.

A convention is good opportunity to find newer books on discount and to a much lesser extent locating a long sought after volume.  Older trade paperbacks and hardcovers rarely make it to a convention as the retailer has to gauge space and weight versus sale and profit.  That attitude is changing but really for new books and not older dusty volumes that hard core collectors are searching out. 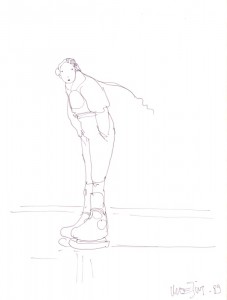 That leaves signings and sketches for those trade paperbacks and hardcover collections that you want to lug around the show for a signature and if you’re lucky a quick sketch.  Above is the first and best sketch in a book that I have: it’s by Moebius in my Incal Volume 1 softcover.  He said everyone in Canada ice skates so he drew this girl.  Ironically it was 1989 and I wasn’t that interested in sketches but The Silver Snail in the 80’s had regular guest appearances at their four stores.  The Hamilton store didn’t get a large crowd for these so the guests were pretty generous with their time. 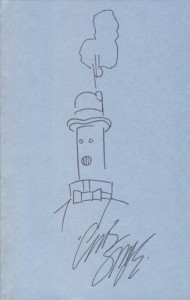 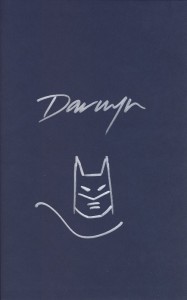 Creators seem to appreciate hardcover volumes, absolutes and omnibus editions more than your run of the mill trade paperback and so they may do a little sketch or doodle in the front like the two examples above from Chris Sprouse and Darwyn Cooke. 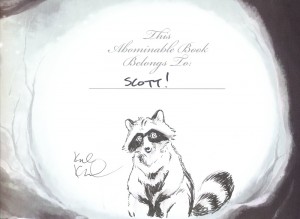 If creators are selling their own books they may offer a premium like the sketch above from Karl Kerschl in his self published The Abominable Charles Christopher hardcover.  I don’t normally get a paid sketch in my books: it limits what you can do with it and I’d rather have it on a larger scale so I stick with 11×14 heavy duty art paper.  Unfortunately Karl wasn’t sketching at TCAF last year when I bought the book so it was this or nothing and it was only $20.

Prepare yourself before the show: compare the list of guests to your bookshelf and pull out all the books you could get signed.  No decide what’s worth carrying around, especially if you’re taking public transportation to the show.  If you’re driving then the decision is a little easier since you can bring in as many as you’d like, get them signed and then swap them at your vehicle.

Saved the big question for the end: is it worth it?  If you enjoy collecting collected editions then adding a signature is a worthwhile effort.  If you’re lucky you’ll get a quick sketch or doodle and best of all creators don’t charge for signatures, except Stan Lee.