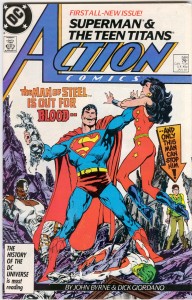 The Cover: Oh Superman, why won’t you stop beating up your teammates? Do they have battered wife syndrome where they keep coming back to you after they beat you up? You would be hard pressed to find a superhero who hasn’t been beaten senseless by Superman. This time, it’s the turn of the Teen Titans to get collectively spanked by him. And who is there to save the day? Some guy who can’t even walk without the aid metal walkers! Man, they’re screwed. And wow, there’s no real way to write about the absurdity of it without seeming like a total jerkwad.

The Story: Our tale of Teen Titan bashing begins with a sunny day in Metropolis as a crowd below watches Superman soaring high above the sky as he starts punching skyscrapers?? Well, I guess he’s gotta do something as a hobby. So while he’s smashing buildings for the hell of it with a smile on his face, the debris begins to fall upon the crowed when all of a sudden Cyborg bursts onto the scene! Tearing off his shirt while his pants…explode off his legs? Cyborg blasts the debris to pieces and swings upwards to confront Superman.

Cyborg hurls some crap at Superman to get his attention who doesn’t seem to recognize him and proceeds to get the utter crap beat out of him as Superman breaks off parts of his body and hurls him off a building. After landing on the soft concrete below, Cyborg calls in the other members of the Teen Titans to give him a hand. Since the Titans are based in San Francisco, they use their special powers of “cutscene teleportation” to appear on the battlefield immediately. After immediately beating up Beast Boy and hurling him aside, Superman begins to choke Wonder Girl and heavily imply that he’s going to rape her! Holy crap! First Big Barda then Wonder Girl? Who needs Lois Lane when you can just be a super-rapist.

Meanwhile, Jericho is hanging out at a school for the hearing impaired when he gets the distress signal and using his own powers of plot jumping teleportation  Jericho makes his way onto the battle and uses his ability to take control of Superman’s body. While inside, he notices he doesn’t have full control over the body, apparently it’s due to his alien body At this point, the skinny dude in glasses shows and exclaims “I’m Sparta- I mean I’m Superman!”. As the crew begins flying off to someplace, Super-twerp begins explaining how Superman was called to the house of a scientist called David Gunderson to assist an experiment involving special pollution free energy. But in reality, it really was a mind swapping ray which trapped Superman inside David’s disabled body! After locking Superman/David into a room, David/Superman took off to try off his body and presumably fool around with loose women based off of his earlier advances on Wonder Girl. As they enter David’s lab, they use the machinery to reverse the process while David launches into a tirade about how he was mistreated and the world is cruel to him because of his disability. But Superman counters with the example of people who overcame adversity like Helen Keller and FDR. And then he screws up by mentioning Jericho who while mute managed to make the best of his situation and became a superhero! Oh wait Superman, you forgot to mention that Jericho has the superpower of taking control of bodies! Did you forget that little bit of trivia?? Superjerk. Our tale ends with Lex Luthor reading a newspaper and finally realizing that there might be a link between Clark Kent and Superman…only like 10 years too late for a genius mind like his.

The Rating: 9/10: This cover was pretty darned close! We got the titans being beaten up, Superman choking Donna with a goofy look on his face and even got the skinny guy showing up. Throw in some weird uncomfortable situations and you got the makings of a crazy comic cover!