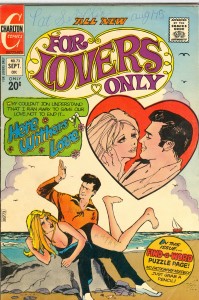 The Cover: Wow…it’s a dude spanking a chick on the beach. This will either be the world’s greatest comic or the world’s greatest disappointment if this scene isn’t in the story. Look at the fire in her eyes as she balls her fist to slam into the spanker’s face! Of course, astute viewers will notice that he’s obviously not even using the correct hand to spank her bottom, amateur! It looks like he’s about to judo chop the living daylights out of her!

The Story: Our epic tale of spankery opens with the married couple of Jon and Kathy gazing lovingly into each other’s eyes as they reminisce about the dinner party they just had, While Jon compliments his wife about her amazing cooking, she has thoughts about Jon being a lazy slob! Then all of a sudden in the middle of the kiss, she speaks her mind, complaining about Jon and their neighbor Fred being the town’s laziest men. Man, talk about cold water being thrown on you! You’re making on with your wife after playing you a compliment and she calls you a lazy slob out of the blue? Jumping forward into Kathy’s sleep after what I am sure was an evening of not getting it on, she starts to dream of how she met Jon.

She remembers how they met as he; an Air Force Pilot and she; a mechanic got together after Jon asked her out in the most classy way possible; by ordering her to! After they married and Jon was discharged from the Air Force, he got a job working for a big company and moved them out to the suburbs with a big nice home. And that’s where all the trouble begins. Kathy hates suburban living and hates the idea of Jon having a secure job that doesn’t involve him risking life and limb. So this man is madly in love with his wife and she’s not happy that he’s providing a living for the both of him without coming close to death each time…awesome! So one day, Kathy makes good on her threat to leave Jon and heads down to a tropical island to start her own tour company. As the months pass by, Kathy begins to miss Jon and considers returning to him but decides that Jon will become lazy again if she returns to him, so she continues to run her tour service on the islands. One day, as she is about to sign a contract for her tour service, Jon shows up to take back his wife! Declaring that she is his woman and she’ll do what he says, he begins to chase her around the beach.

She starts to struggle against him and cries out for help as he carries her back to the shore. Once on the shore, he bends her over his knee and begins to give her a spanking! BOOYA! His exact words before he begins to spank her? “Just hold still and see, baby!” You have to love the 70’s. To top it all off, after delivering the spanking, Jon reveals that he has left his job at his company to take a job as a pilot for Kathy’s tour business. With tears still streaming from her eyes from the spanking, Kathy kisses and makes up with Jon.

The Score: 10/10 Our first perfect score ever! Not only does the scene from the cover playout, I am fairly sure they used the same art! Sure, the story made almost absolutely no sense at all, but it’s good enough for anyone who’s hankering for a spanking!