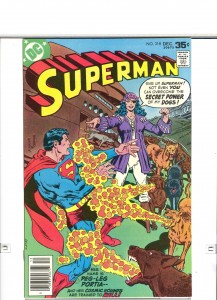 The Cover: AHAHHAAHA that’s all I got to describe what we have on this cover. Superman is being assaulted by a bunch of dogs shooting orange skittles out of their mouths at the command of a pirate lady. I think they were running out of things for Superman to fight and punch so they just decided that space dogs and pirate ladies named Peg-Leg Portia can meet the challenge of beating a man who could give God himself a black eye.

The Story: 20 bucks says you never thought you would open a comic book up to start off with a splash of Superman wrestling with what appears to be a constellation in the form of a dog in outer space, eh?  As Superman is attempting to Michael Vicks the life out of this weird dog thing, it slowly begins to crush him in its jaws as he flashes back to the events leading up to this. We find ourselves back on Earth as Clark Kent is greeting Lana Lang as she returns to work in Metropolis after a stint in Europe. Lana is happy to be back near Clark and laughs off all the times she noticed Clark Kent was running away from her and Superboy would mysteriously appear as silliness. Seriously? All that stuff like aliens attacking you and being kidnapped as been repressed? She must be on some crazy pills on something. Case in point, look at this picture of her at the dinner table. She’s got the look of pure crazy on her face.

Anyways, Superman gets a call from an observatory that needs him to take a look at a strange light in the solar system. Obviously not needing to do anything like saving lives from all the bad things happening on the planet at the time, Superman has the time to leap into space and explore lightshows. Flying towards the light, Superman passes through it to find himself in another solar system where he finds a pirate ship wrecked in the depths of space. Flying towards it, he’s knocked back by an invisible force field after which he is attacked by that dog constellation thing from before. Before swallowing him whole, the dog throws him down to a planet’s surface below where he falls unconscious as hundreds of thousands of dogs swarm him. Superman awakens to find himself inside a ship as a crazy lady dressed up as a pirate in a wheelchair enters the room and begins to swing an axe at him thinking him some kind of illusion or who knows what. But she swings at him and is surprised at the axe breaking off on his ship. You gotta admit after all Superman has been through, even this has to be a new experience for him. Superman grabs the head of the axe and uses his super-rubbing skills to polish the axe into a mirror to prove he is not an illusion.

Finally believing him, the pirate lady reveals herself to be a gamehunter from a planet called Aquaterra. One day while exploring a planet, a crudely built trap ensnared her, crushing her leg and blinding her in one eye. Apparently a group of super-intelligent dogs rescued her and nursed her back to health. She had to amputate her own leg with the help of the dogs who could psychically block out her sense of pain. What we have here are…essentially a bunch of dogs that can get you high with their psychic powers to aid in cutting off your limbs?? Since humans aren’t allowed on the planet, the dogs put her on a ship to outer space. The light the scientists on Earth saw was a distress flare sent up by her. And the pirate getup? Just for the hell of it apparently! While talking to this pirate lady, Superman is attacked from behind all of a sudden by a pack of dogs. Superman begins to slap around a bunch of dogs who decide to retaliate with their psychic vomit powers. Deciding that enough was enough, Superman spreads his arms out and knocks them all out with a mighty CHOOM! When Superman shows up back on Earth, PETA is going to be all over his ass. Portia then reveals that the dogs are really keeping her prisoner so that she can pilot the ship for the dogs. So dogs can build spaceships that they can’t pilot? Ok then.

At this point, Superman begins calling her by her name Portia but at no point in the story does she EVER mention that her name is Portia. Supes picks up Portia and flies her back to her home planet of Aquaterra himself which happens to be a ghost town of a planet with no life on it at all. It turns out that 300 years ago, a solar flare annihilated all life on the planet. Which means…DUN DUN DUN! Portia is really 300 years old and she was being kept alive by the psychic powers of the dogs. Now that she is away from the dogs, her body begins to break down and she rapidly ages. She then reveals that the real reason she was on a different planet was that she has some strange contagious deadly disease that would infect her people, so she went to the dog world. The dogs however, have been using their psychic powers to repair her body constantly. All of a sudden, the dogs using their psychic powers to operate the ship which they just learned to do arrive to try and save her life. Since she wants to end her misery, Superman goes to fight off the dogs but then all of a sudden…decides to NOT let her die and flies back to her only to be blocked by the psychic shields of the dogs? MAKE UP YOUR MIND DAMNIT! Superman has decided that he doesn’t want anyone to die when he flashes back to an instance where Jonathan Kent told him that he isn’t God and death was inevitable. So Superman stands down and allows Portia to die while the dogs gather around and mourn her death as Superman flies off to space. All the while forgetting that he was hanging around a CONTAGIOUS woman. So he’s off back to Earth to probably spread some horrible disease to everyone.

The Rating: 4/10: Sure we had dogs attacking Superman, but the original intent promised on the cover was missing. She was never called Peg-Leg Portia nor did she even sic the dogs on him, they went on their own. Such a disappointment.