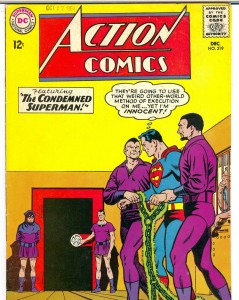 The Cover: Finally! Justice is being done to Superman for all the terrible things he’s done. Our cover features a kryptonite chained Superman being led to a mysterious room where they will use a “weird other-world method of execution” on him. Probably to punish him for all the terrible things he’s done on the cover of his comics. I must say, the use of the purple is pretty hilarious, especially when you look at the executioner with his purple outfit and skirt. Sure he’s an executioner of prisoners, but he’s gotta wear a lame purple skirt while doing it. That can’t be good for his self-esteem.

The Story: The execution of Superman kicks off with a courtroom scene on the planet Lexor where the trial of the century is taking place! It’s the people of the planet Lexor against Superman who is being tried for the murder of Lex Luthor and is being accused by Luthor’s wife on Lexor; Ardora. For those of you not in the know, Lexor is a planet full of people who worship Lex Luthor as if he was a god. And…instead of just hanging around this planet, he spends his time trying to kill Superman? Priorities, man! Priorities!

As Superman sits in the courtroom with his court-appointed lawyers that don’t really want to defend him, he flashes back to how he landed up in this predicament.

After chasing Luthor when he escaped from prison, Superman chased him to Lexor to recapture him. When he arrived and found Luthor, since the planet somehow inhibits his superpowers, Superman engages Lex in a fistfight and knocks his bald nemesis out like a light. But Luthor stumbles backwards and hits his head on a stone statue of himself and is killed!

We jump back to the present as Superman is being cross-examined and no one believes that Luthor is a criminal on Earth, instead proclaiming him to be the greatest person in the history of the planet. I am not making this up, there literally is a planet of people that worship Luthor to this extent in the DC Universe. I can just imagine in the 60’s where the DC writers are sitting in a circle passing around a joint talking about how cool it would be if there was a planet that worshipped Luthor. So anyways, they transfer Superman to a jail cell outside death row where he witnesses a prisoner being lead to the execution room where he witnesses the mysterious execution method that they use. And it turns out to be…a ray that turns people into stone. Wow, that was kind of anti-climatic, I was kind of hoping that they would pour a swarm of ants onto you or strap you to a rocket and blast you into space or at least something involving a pig, a spoon, some honey and a camera.

So while the trial continues the next day, when his defense attorneys give Superman a chance to lie to save his hide and he refuses to take it, they slowly begin to believe him about his claims. Later that night, one of his attorneys visits Superman after which Superman knocks him out and sneaks out of the prison. Wait, is this some kind of ironic situation thing? He believes he’s innocent so he enters the cell so Superman can attack him to prove his innocence?

Whatever, so Superman busts out and runs into Luthor’s lab on Lexor where he discovers that Lex kept coma drugs labeled in English in his lab. The reason that they were labeled in English was because no one on Lexor can read English. Then…what are they speaking in? They never mention a native language to the planet and they all look human!

Superman grabs an antidote for the drug and sprays it on the body of Luthor who is encased in a glass tomb like Lenin. After awakening, Luthor explains his whole plan about purposely getting hit by Superman then taking a coma pill to frame him for murder. At that point, the entire planet rejoices at Luthor’s revival by believing that he accidentally swallowing a coma tablet he had on his person at the time. You know, instead of assuming he was some kind of creepy date-rapist who carries roofies with him. So instead of killing Superman, the people of Lexor banish him instead and Luthor stays on Lexor with his wife.

The Rating: 6/10: Yeah, this was pretty anti-climactic. I was hoping for a super wacky execution method. And those kryptonite chains don’t even show up in the issue, because Superman claims he is powerless on Lexor anyways.