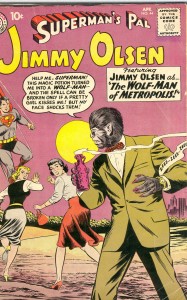 The Cover: Jimmy Olsen has all the luck, not only is he a snazzy dresser, but he can also transform into a werewolf! Jimmy seems to have drank a magic potion that turns him into a werewolf and the effects of the potion can only be broken through the kiss of a pretty girl. Really, Jimmy? Does it say pretty girl or are you claiming that just to have an excuse to lock lips with a hot chick? Either case pretty girl or no, Lucy and Lois can’t stand to look at his face and run away while Superman shows up to lend a hand…or laugh at Jimmy, I’m not sure which.

The Story: Whoa whoa whoa, our story opens up pretty hot and heavy. Jimmy’s making out with Lucy Lane and doing a darn good job of it as he begins to moan and exclaim “I want more of this!” You dirty old dog you! As Lucy draws away, Jimmy almost begins to beg for more while Lucy shoos him off for the night and reminds him about a masquerate ball they are attending. Better luck next time, Jimmy.

The next day, Superman arrives at the Planet with a chest full of magic potions made by Merlin. Jimmy Olsen picks up one of those boxes and reads the description of it being a wolf-man potion. Completely ignoring that his best friend is an alien from outerspace and can shoot beams from his eyes and all of his previous adventures, Jimmy tells Lois that it’s probably a myth and he’ll drink as he eats his sandwich. Forget it being magic, who in their right mind drinks liquids a couple hundred of years old unless it’s booze?? So Jimmy Olsen gulps down the potion and later that evening picks up his masquerade costume and tries it on to find that he has become a wolf-man! With some quick thinking, Jimmy shows up with a different costume at Lucy’s so that instead of Romeo and Juliet they showed up as Red Riding Hood and the Wolf. At the party, Jimmy wins the costume contest and as they leave, Lucy won’t give Jimmy the kiss needed to break the spell until he takes the mask off as she doesn’t realize it’s a mask. But later than evening, when Lucy tells Lois all about the evening as the Lane sisters seem to share all their intimate moments with each other, Lois tries to convince Lucy that Jimmy may really be a wolf-man but is convinced otherwise when she says Jimmy all normal the next day at work. SILLY WENCH! Don’t you know men who turn into wolves only turn into wolves under the light of the moon? Jimmy is then sent to the set of a horror movie with Lois and Lucy where he is mistaken for a cast member due to his change. When the director wants to cast Jimmy who doesn’t want his real wolfiness to be revealed, he asks for an obscene amount of money in order to make his escape. At this point, Jimmy is desperate for the magic spell to be broken…so…he goes to the bank to withdraw ALL his money and plans to go to the park to HIRE a girl to kiss him!! HOLY COW DID JIMMY JUST WITHDRAW HIS SAVINGS TO BUY A HOOKER????

But unfortunately, Jimmy is new at being a john so he doesn’t  approach the right girls. Jimmy then calls Superman to lend a hand with his signal watch who agrees to try to help him find an antidote. In the meantime, Jimmy is flying a helicopter at work when all of a sudden the high winds force him to land near Lois and Lucy who begins to again believe that he really is a were-wolf until luckily a nearby woman points out that he probably is a hired stuntman promoting a newly release wolf movie. Jimmy takes his opportunity to pretend he is acting as a side job when Superman shows up to save Jimmy’s bacon by flying him to a dark room where a woman named Miss X will make out with him to cure him. Obviously Superman is much better at hiring ladies of the night or much more experienced anyways! So Jimmy and the mystery lady make out which ends up curing Jimmy who is able to go out on a date with Lucy. But as he begins to make out with Lucy, it’s obvious his heart into it as his mind now drifts to the mysterious Miss X. Who is Miss X? Well, as Superman and the mysterious figure fly back to her home, it’s revealed that it really is Supergirl! A happy ending for all.

The Rating: 7/10: Ok, the general theme of the story plays out on the cover even though Lucy and Lois never run away from the wolf –man Jimmy. But you gotta give them bonus points for making Jimmy a big horn dog and having him empty his bank out to try and hire a woman to make out with him!