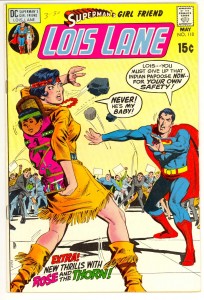 The Cover: Unless Lois Lane happened to get freaky-deaky with a Native American at some point in the comics and had a baby real quick, it’s safe to say that she has stolen someone’s baby. I can only imagine years of pining after Superman without any success have finally snapped her fragile mind and caused her to abduct a native baby and adopt a native persona herself. Look at the sheer amount of crazy on her face! Even if we ignore the fact that Lois probably stole a baby, check out the size of the rocks being thrown at her. They’re the size of a human head, which means that crowd is out for blood! Why they’re trying to kill Lois Lane is beyond me but they seem intent on killing her with rocks to keep their distance from her crazy.

The Story: Lois Lane starts off with doing a news report on the Mother of the Year in a slummy part of Metropolis. During an interview, Lois is berated by a mother who demands to know what right Lois has to ask about these kinds of things when she’s not a mother herself. Lois, being the semblance of sanity, decides to try to adopt a child! Two pages in and we’re given a glimpse into Lois’ insanity. She wants to adopt a kid for the sake of doing a tv spot on motherhood? Of course no orphanage would give her a kid for such insanity…oh wait, the reason that they denied her was because they don’t give kids to unmarried women? Ah that makes sense. Having given up on her dreams of crazy motherhood, Lois requests a different assignment and is asked to cover a rain dance being performed by some Pueblo Indians.

Arriving at the Santa Fé reservation, we’re treated to some clips of amazing American ignorance and racism by the gathered crowds. Though if these guys all seem to hate the Natives so much, why would they pay to go watch them do a rain dance? That would be like me paying money to see a Celine Dion concert and then complaining about it the whole time. So the natives arrive and then declare that there will be no rain dance because their sacred ritual wasn’t meant to be commercialized by sleazy organizers taking advantage of their traditions.

The crowd doesn’t react too kindly to this and a brawl ensues as apparently the white man starts fights when they can’t watch the red man dance. In the midst of this, Lois spots a woman holding a baby and asks her to leave before she gets hurt and the mother of the year responds that her baby must learn to be hurt by the white man. Brain hurt aside, Superman shows up to disperse the crowd. As the crowds break up, Lois follows the leader of the Pueblo; a dude by the name of Johnny Lone Eagle who decides to lecture Lois on how the white man has decimated the environment. To further their problems, these Pueblo left their government reservation and founded a town in a valley that they have claimed for themselves. Now a millionaire wants to build a dam nearby which will flood them out. The Pueblo decide that they will become suicide bombers to destroy the dam to save their village. You know, disregarding the fact that just because you blow up a dam doesn’t mean they can’t rebuild it. So Lois apparently decides that the only way stop the madness is to spread the message to others through the ancient method of smoke signals! That’s right, she decides to tell the plight of the Pueblo to the world by sending up smoke signals of her story. What the bloody hell is that supposed to do? Are there millions of people looking in her general direction on the edge of their seats for any signs of smoke signals? 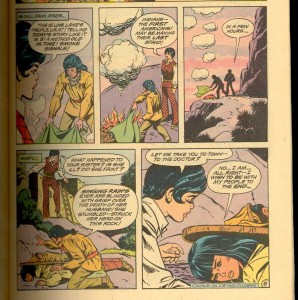 After her pointless smoke signal story, Lois stumbles upon Singing Rain; the woman with the papoose from the riot who has fallen on her head after stumbling. The next day, as the Pueblo prepare to engage the construction workers to attack the dam, Superman shows up to dismantle the dam and move it to a new location. I’m not even quite sure how this makes sense, but I’ll roll with it. Returning to the town flush with happiness for the Indians, Lois returns to find Singing Rain dying of…who knows what? The fall from earlier? With her dying words, Singing Rain gives Lois her baby and asks her to take care of him. Apparently just handing over babies is a normal thing in Superman’s world so Lois takes the baby home to take care of. While driving around with the baby, Lois swerves to avoid a truck and flies into the river. As she desperately tries to escape with the baby, she drifts into unconsciousness only to wake up in a hospital bed.

Yes, the man who saved her happens to be the baby’s father. He happened to be in the army truck that Lois dodged and was believed to be MIA in Vietnam. Happy reunited with his daughter, the man doesn’t even question what sort of messed up circumstances to cause this crazy white woman to have possession of his daughter and what happened to his wife!

Our story ends with Lois being elected foster mother of the year and having stated that despite the skin color difference the baby and her have the same heart.

The Rating: 1/10 Lois does take some flak for taking on the papoose but the cover never happens or even comes close to happening! It just hurt my brain reading this piece of crap.