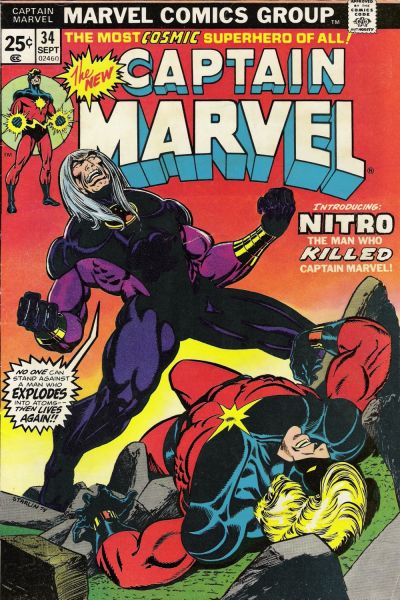 This has to be the most overlooked and undervalued issue in the run. This issue features Jim Starlin cover and art and it introduces the villain Nitro.

Jim Starin just pulled off an epic Thanos arc that ran through Captain Marvel #25 through #33 and you’d expect a letdown. Nothing could be farther from the truth. Captain Marvel #34 is in many ways one of the most important comic books ever published!!

Like Gavrilo Princip, the Bosnian Serb who in 1914 assassinated the Archduke Franz Ferdinand of Austria and in the process set off World War 1, Nitro is not much on his own but he’s a very significant figure in history. After detonating himself to get away from the New Warriors, Nitro ends up killing hundreds including 60 school kids. This takes place in 2006 and the event directly leads to a push for the Superhuman Registration Act which directly leads to Marvel’s epic Civil War event. It all started with Gavrilo and it all started with Nitro.

Nitro was changing the course of history long before Civil War though. In this very issue, Captain Marvel #34, Nitro exposes Captain Marvel to carcinogenic “compound 13” nerve gas. Captain Marvel survives the incident but contracts the cancer that will one day kill him.

Is there no end to Nitro’s mark on history?