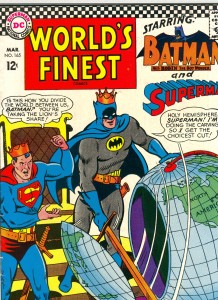 The Cover: This is just a fantastic cover. Apparently Superman and Batman have become the rulers of the world and Batman is some sort of greedy globe mongering Bat-jerk who is wearing a crown on top of his cowl. Isn’t a cowl a form of hat already? So he’s wearing a hat on top of his hat? So they’ve somehow become the rulers of the world and are now dividing the world up by slicing a globe open with a sword. Superman, if you’re so pissed about Batman taking so much, just do like you do on every other World’s Finest cover and melt him with your heat vision or throw him out of an airplane.

The Story: Our opening splash page reveals Robin being forced to dress up as a court jester in a lavish throne room as Superman and Batman sit on their thrones and threaten him with harm if he doesn’t continue to amuse them. What could have caused such a change in attitude towards Robin? Well, probably nothing good but let’s read on to find out.

Our tale begins with Bruce and Dick on their way to witness the execution of a criminal named King Wolff who apparently is being executed because he is the “most dangerous criminal alive”. So let’s get this straight…they are executing a guy who thinks who is a King which definitely makes him insane while Batman’s villains like the Joker get insane asylums? So anyways, Clark Kent shows up to witness this execution as well as Wolff begins the usual prep like his last meal. Once they sit Wolff’s tubby body into the chair and they flip the switch, the chair suddenly takes off as the chair has been converted into a flying chair. As Wolff makes his escape, Batman gives chase while Superman stays behind to stop the electricity by…letting his costume absorb lightning and somehow shoot it back it out. I think whenever the writer can’t think of a lame super-power to give Superman personally like his super-ventriloquism, they just attribute it to his costume.

Arriving at the hideout which turns out to be a bakery, Batman infiltrates the hideout only to be knocked out by Wolff and sent to be dumped into a river by a thug. Robin jumps in to save the day and once they knock out the person sent to throw Batman into the river, Batman disguises himself as “Crusher” to figure out Wolff’s plan. Wolff explains that while mucking about with radiation, he gave himself a fatal dose of radiation. Since he’s about to die, he’s going to give his henchman a chance to inherit his crown by assigning them tasks and whoever does the best job of it gets the crown. As his cronies go off to do their tasks, Wolff’s thought bubbles points out how no one will ever suspect his true reason for his tasks. Whatever could it be! Maybe he’s just really bored and wants to see his cronies run around.

The next day, Batman and Superman are staking out the scene of one of the tasks which is the theft of a newly developed liquid fuel from a government lab. They decide that it’s in their best interests to allow the thefts to occur so they can figure out Wolff’s scheme.  The goon named Grinnell approaches the plant disguised as a London Times reporter. As he tries to fool them with his credentials, he sprays the room with “illusion-gas” which he is immune to due to his contact lenses and takes off with the truck full of fuel. Let’s just ignore the fact that protecting youself from the effects of GAS with contact lenses which go over your EYES is a terrible idea. Anyways, as they make their getaway, the army is catching up to them, but Superman decides to lend the crooks a hand by flying to a nearby car dump, grabbing a bunch of them and throwing them at the road to prevent the army from catching up. So not only is Superman helping the crooks, he’s stealing parts from a car dump and damaging roads. Good job…jerk.

At the next theft site, they pretend to have Superman stopping a robbery of a glass factory which is foiled when the fake Superman steps on the hand of his buddy causing him to yell out. Once the jig is up and the crooks are about to get shot, the real Superman helps them out by blinding the cops with a telescope lens. So the crooks make off with some experimental glass.

For the final heist, Batman goes undercover as Crusher…who goes undercover as Batman. Confusing? Yes. Entertaining? No, not really. So real Batman pretends to be fake Batman- ah screw it, I’m just calling him Batman. Batman pretends to be held captive on a ship and they sail off to a nearby submarine base where they threaten to drown him if they don’t hand over their computer. Robin shows up to help sell the act and is captured along with Batman.

Back at Wolff’s lair, Wolff declares the crooks who dressed up as Superman and Batman to be the winners and says they are now the kings of the Kingdom of Crime which means they get crowns, swords and thrones. Batman declares Robin to be the new court Jester and when Wolff presents them with a globe to represent their kingdom of Crime to divide up, Batman whips out a sword to slice out the lions share for himself. After this, Batman asks Wolff why he really wants all this crap, it turns out he really is dying and jumps into a rocket ship to blast off to the moon! Um yeah, that’s…not quite what you were expecting was it? So Superman flies after him to find Wolff on the wrong side of the moon he planned to go because his guidance system was busted. Wolff takes the glass they stole from the moon to spell out a giant glowing “W” on the planet and with his dying breath, exclaims that his plan was to be the first man to die on the moon. The End. No, seriously, this is how this comic ends. This really was a terrible read.

The Score: 8/10: This scene in the comic happens very close to the cover and it had the most insane ending to a story ever, so I gave it a bonus point.