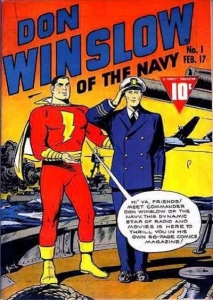 This week Overvalued Overstreet takes a look at a very popular and successful character from the Golden Age of comics – Don Winslow of the Navy.

The character Don Winslow has a very interesting history. He was originally created by Frank V. Martinek a commander in the US Navy as a comic strip in newspapers back in 1934. His original purpose was as a recruitment tool for the Navy, hoping to attract young lads to the service from the heartland of the US or middle America (i.e. farms). It is not hard to imagine how foreign a life on the sea would be to people back then, many of whom might not have even seen the ocean. It might also seem pretty darn exciting, especially in the depression of the 30s. The Don Winslow newspaper comic strip sought to capitalize on this by featuring exciting high-spirited adventures.

Two short-lived comic versions of Don Winslow followed in 1937. Mervil Publications and 1939 Dell Publications featuring newspaper strip reprints and some original material. The movies came calling next with a twelve episode movie serial in 1941, with Don Winslow and his sidekicks battling “The Scorpion”. Commercially the timing couldn’t have been better as the breakout of the Second World War with Japan had just occurred. Navy recruits were no longer hard to find either. Time for a regular comic series for the now very popular Don Winslow.

The new Don Winslow of the Navy series was initially published by Fawcett and later by Charlton and ran for seventy-three issues from February 1943 through September 1955. I think by all accounts you would have to say commander Frank W. Martinek’s creation of Don Winslow was an unqualified success.

I have been following sales of this title for some time. Most of the books sales I have seen were low to mid grade books and all seemed to go under guide. That is not unusual for books in this grade anywhere today. There was a recent ComicLink auction that I felt would be a good and fair test of the titles overall popularity as it featured some higher grade books and some pedigree Mile Highs. The results of the auction and some comic shop opinion put Don Winslow in this week’s Overvalued Overstreet.

Here are just a few of the results of the auction.

These books were in pretty stellar condition. They don’t grow on trees in these grades. I chose #1 for the Overvalued spotlight because if you can’t get close to guide with a beautiful copy like this one, you never will. The Mile-High pedigree copies did average about x 1.25 guide, my favourite one being issue #44 with the classic scorpion web cover. This book was the single highest graded, as well as a Mile High, and in 9.2 it guides for $500. It sold for $655 which is not a huge premium for one of the priciest books in the run.

I know most people look at Golden Age books as pretty solid investments, and a bit undervalued in today’s market. I think this does apply for most books with a connection to present day comic collecting. Books and characters who have disappeared over sixty years ago are bound to fade with time, as their collecting audience also fades. This whole run is in need of a price haircut by Overstreet beginning with our #1 issue. It will be interesting to see how this title is treated by the 47th Overstreet price guide.