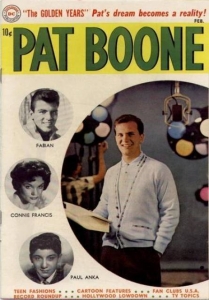 Today we will take a look at one of my least favorite genres of comic collecting – the photo cover comic. Who am I kidding? I think they are the worst. I would say I hate them but “hate” is an overused word, we’ll settle for intensely dislike and leave it there.

My biggest gripe about them is the complete loss of comic art on the cover. They use a photo on the cover to sell the book, like a ‘People’ magazine. They don’t look like a comic at all to me.

This is all to say I am coming from a very bias view when selecting the whole genre in general as overvalued in Overstreet.

I do understand the genre is almost completely nostalgia driven. Iconic stars, movies, and TV programs that cross over generation to generation like John Wayne, the Beatles, Star Trek, Clint Eastwood, and others I can see the appeal in possibly owning a copy or two. There are others I don’t get.

Today’s pick is Pat Boone. Pat Boone was a very popular singer in the late fifties and early sixties. He even rivaled Elvis Presley in popularity for a time before being swept aside by the Beatles. His music was usually light pop with hits like “April Love” and Moody River” and the girls loved him. Guys thought of him as a bit of a “milk toast” or wimp, but they all wished they had his female appeal. He was a straight arrow – apple pie kind of guy. His image was so wholesome and squeaky clean a whole case of WD-40 wouldn’t remove the squeak.

During his peak popularity he signed a deal with National/DC comics to produce comic books in his name. The title started in 1959 and only ran for a few month’s and five issues. They featured many of the times popular singing stars like Paul Anka, Fabian, Connie Francis, Johnnie Mathis etcetera. All of the books had photo covers and looked a lot like a teen magazine.

The 46th Overstreet Price guide values for these books are listed below.

Do you think a teen magazine from this era would set you back this kind of money? Where does the current demand come to justify prices like these?

A guide like Overstreet is very useful in finding and highlighting obscure books and titles like these ones. I get concerned that these prices are from very old demand and don’t reflect current demand. Prices never seem to come down in the guide.

Pat Boone is eighty-two years old now, still active, and in the entertainment industry. I could be all wet about these books and their popularity. Little old ladies may be scouring the internet looking for them driving demand to all-time highs. I confess to not knowing what makes photo covers so appealing in a comic book today, and would love to hear from collectors pro and con about this genre of comics.