In this week’s Arcs & Runs we will follow up our Human Torch piece from last post with another of the most popular and highly sought after characters in the Marvel stable of super-heroes – Prince Namor the Sub-Mariner. This introduction has been paid for by comic shop owners almost every where.

Well maybe I am being a little hard on old “Diamond” head. Sub-Mariner comics do tend to languish in back issue bins in many of the comic stores that I visit. They can’t seem to get anywhere near guide for the books they have. This isn’t a new thing and the Sub-Mariner isn’t the only character who suffers from the malady. Sgt. Fury, Daredevil, later issues of Tales to Astonish, Tales of Suspense, and Strange Tales also suffer from a lack of readership in lower grade reader comics. What does set the Sub-Mariner apart is that high grade copies languish as well and they are already pretty cheap.

I have always felt the Sub-Mariner #1-72 run has been under appreciated for it’s content. Excellent art and solid story telling, and many cross-over guest stars are sprinkled liberally in the books. We’ll take a quick look at the first fifteen issues of the series today and point out some of the highlights of the rest of the run at the end. Before we get started a little tale of the “Diamond Head”.

This story takes place about twenty-five years ago. I was sorting through my collection of Sub-Mariner comics picking out the few I intended to keep and then selling the rest. My now long dead Uncle Bill was sitting at the kitchen table with me. He was looking at John Buscema’s wonderful rendition of the Sub-Mariner on issue #1 and then proclaimed in disgust “that’s not the Sub-Mariner”. The Sub-Mariner he continued has a big pointy head – ‘this guy looks like Superman in bathing trunks’. Once I stopped laughing he told me about reading the Sub-Mariner in the early forties. My dad and uncle were born in the now ghost town of Depot Harbour on Parry Island just outside of Parry Sound Ontario (birthplace of Bobby Orr). Depot Harbour was a small port town and a very poor one for the townspeople at that. Comic books came to town via boat and train passengers, mostly tourists and were shared amongst the kids on the island. My uncle only saw one book with an actual cover on it, all the rest were coverless, tattered and torn, and very well read. The favourite of the island folk was the Sub-Mariner and he was nick named “old Diamond Head” for the way he was drawn back then with an over-sized pointy head. I am certain they would have approved of John Buscema’s version over time ^-^.

The artwork in this run is divided amongst five artists over a fifteen issue run, not dissimilar to early Captain America and his first twenty issues. Big John Buscema has the reins for issue’s #1-8, Herb Trimpe has issue #9 and John Romita corrections, enter Gene Colan issue’s # 10-11, John Romita has the cover for issue #12 Marie Severin the interior, and she does all the work the rest of the way on issues #13-15 except for Dragon Man’s face which just had to be done by John Romita. Inking chores are split between Frank Giacoia, Dan Adkins, Joe Sinnott, Vince Colletta, and Sol Brodsky. Roy Thomas does all of the writing.

And away we go…

Sub-Mariner #1 has already been covered in Arcs & Runs previously, but I have to nod the cap to John Buscema once more for his terrific rendition of the Sub-Mariner on this cover. It’s as good as any of the new launch covers in my opinion. This issue wraps up the Tales to Astonish title storyline. 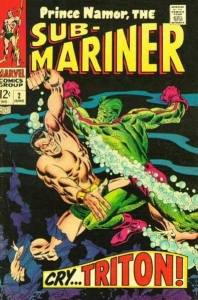 Issues #2 & 3 are a team-up of two of Marvels most famous under water characters. The Sub-Mariner is duped by this issues villain – the Plant Man in to believing that Triton is a menace that needs to be dealt with. In typical Marvel manner the Sub-Mariner and the Inhuman Triton do battle against each other, and then both are caught and trapped by the bad guy – Plant Man. They break free of the Plant-Man’s prison in issue #3 and team-up to battle the Plant-Man’s creation – Leviathan who is attacking the city of London. Together they defeat Leviathan and the Plant Man. It won’t be the last time these two uneasy allies will work together. Their next meeting will be in issue #18. Terrific battle cover on issue#2.

Sub-Mariner #4 features a battle with one of the Sub-Mariners old foes Attuma who has taken over the city of Atlantis. With the help of an unseen Lady Dorma and one of Attuma not so loyal lieutenants, the Sub-Mariner defeats Attuma and takes back control of the city. 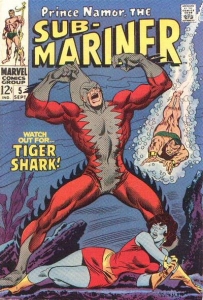 Sub-Mariner #7 features a battle with Destiny. He has been lurking throughout the past few issues and now we find this maniac is trying to rule the world as President of the United States. I think I will refrain from comment here. The Sub-Mariner battles and ends up killing Destiny who had been using a helmet of power to control the minds of the people. Something on top of his head eh! – no comment. 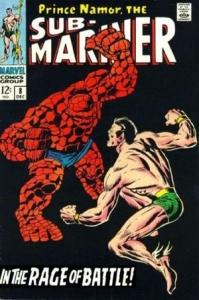 Sub-Mariner #8
December 1968
In the Rage of Battle

Issue#8 is John Buscema’s last work here and it’s a dandy, jet black background and Thing Vs Sub-Mariner battle cover. Namor and Diane Arliss are tending to Lady Dorma who has been injured. As Namor looks at Lady Dorma his mind wanders back to World War II and a gorgeous blonde that he is in love with Betty Dean Prentiss. She is part of a special team that are fighting the Nazi’s and she has convinced Namor to work with them against the Axis. We switch gears to the Thing who has been hired to transport the Helmet of Power to a safe storage facility. Namor sees this on the news and intercepts the Thing, concerned it may be too powerful for anyone to possess. Of course a battle royal begins between these two long time combatants. It starts off simple enough but soon becomes a little more vicious, buildings topple, someone innocent may get hurt. An older middle aged lady is watching the carnage on TV. She gets up and leaves her apartment. The battle rages on getting more and more violent. Stop! a voice cries out. The Thing and Namor both stop dead in their tracks in front this older lady. Namor looks at her and realizes who it is, and out of respect agrees to end the battle. There is some hesitation and then the older woman leaves. When she arrives at her apartment, she sits down at her vanity and begins crying, over lost love and reveals that she is Betty Dean. One of Roy Thomas best stories.

Sub-Mariner #9 through #13 follows the battle for the Serpent Crown. It turns out the Serpent Crown is the true nature of the Helmet of power. Everyone wants it but no one is powerful enough to handle it. Namor battles Karthan the Quester, Captain Barracuda, and Naga along the way to resolving the puzzle of the Serpent Crown. Some very nice work here by Gene Colan. 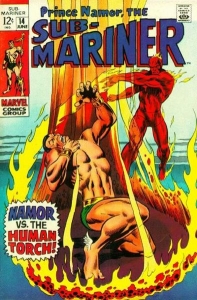 A rip roaring tale that does not let up until the last panel. Something is wrong in the waters of the Pacific Ocean the Sub-Mariner is travelling in. Before he can investigate he is attacked by the Human Torch. The attack is deadly and he Namor powerless on his knees and then reveals himself to be the original Human Torch from over twenty years ago. He calls his master who turns out to be the “Mad Thinker’ and he tells the Torch to kill the Sub-Mariner. Somehow he can’t bring himself to do it, even though he is an android and fitted with a pain collar. Namor uses the time to return to the water and regain his power. The Sub-Mariner then buries the Torch in a tidal wave and puts out his flame. The sub-Mariner can’t believe his old ally has turned against him – he wants answers. The Torch provides what he knows – he was awakened by the Mad Thinker and began to work for him like any android would. His first job was to place a device in a volcano, which is piece of a plan by the Mad Thinker, The Puppet Master, and Egghead for world rule. The trio plan to black mail earth with a ray from space that wipes out all electrical on earth. A wonderful splash page by Marie Severin with many of marvels super-hero reaction to the threat. The Human Torch and Sub-Mariner know its up to them to stop the threat here at the source. A protracted battle with the Mad Thinker ensues, and they foil his part of Eggheads world rule plan. The Torch and Namor have landed safely in the water. While recovering the Human Torch’s mind clears and realizes that he is not the Human Torch, but his side-kick Toro. The Mad Thinker duped the young lad who was trying to find the android Human Torch’s killer (See Fantastic Four Annual #4). Now clear of the brainwashing the flaming mad Toro attacks the Mad Thinkers get away ship. He flies directly in to the rocket tubes and blows the ship up. Killing himself and unfortunately not the Mad Thinker (as we find out later). The Sub-Mariner is left with his thoughts and to contemplate life. A dynamite stand alone book I would recommend to any comic reader. Beautiful cover by Marie Severin.

Sub-Mariner #15 is the last book in this run. Another cool cover with the Sub-Mariner battling Dragon Man. Doctor Dorcas and Diane Arliss are also along for the ride, which means Tiger Shark can’t be far behind, and he isn’t, he is up in the next issue #16.

There are a lot of solid books in this title. Issues #34 & 35 featuring the Defenders prequel, issues #47-49 which has Doctor Doom, Modok, Cosmic cube story, #50 first Namorita, issue #57 Thor Battle and many more. The series ends at issue #72. Next stop for the Sub-Mariner is a gig with his old pal Doctor Doom in Giant -Size Super-Villain Team-Up, followed by a series with the same name.

The 46th Overstreet Price guide values for the books covered today are listed below.

There are lots of books in this run worth giving a try and they are usually found in bargain or $5-10 bins.

Maybe they will make a movie, yeah that’s the ticket….

See you in a couple weeks.