One of my favourite genres of comic collecting is the Atlas/Marvel pre-super-hero monster books from the 1950’s and early 1960’s. They featured a lot of Jack Kirby and Steve Ditko artwork. The stories were simple, fun, and entertaining. The litany of ridiculous monster’s names featured in these books became part of the lore and fun in collecting these issues.

The downside to this collecting strain is that it is infested with many books with unwarranted increased value in Overstreet called “prototype” issues. These are books that are singled out for having some sort of pre-existing connection to a character later developed in the Marvel superhero universe.

Before we get too deep here let’s take a look back in time to the progression of prototype issues in the Overstreet Price guide itself. Prototype issues started showing up in the guide in the early 80’s. There was a growing acceptance of the Overstreet Price guide by the collecting community, and many people were contributing with suggestions for the book. First appearances were the rage back then and dealers/collectors were pointing out many older books (pre-hero) that they felt had a significant connection to current Marvel characters. Some examples would be Metallo (Iron Man) in Tales of Suspense #16, and Elektro (Electro/Spider-Man)) in Tales of Suspense #13. More and more of these examples surfaced and demand for these prototypes increased. The last time I ran through the guide there were over forty of these types of books listed.

The problem I have with all of these books is that none of them are “prototypes” in the conventional sense at all. A prototype is usually connected directly to a finished product. Many if not all of these issues are not. Let’s look at a few examples.

The Stone Men of Saturn were featured famously on the cover of Journey Into Mystery #83 (1st appearance of Thor). There at least four prototype issues listed for the Stone Men. Tales to Astonish #5, 6, 16, and Tales of Suspense #28. Although not listed I thought the cover borrowed a lot from Tales to Astonish #29. I believe this is all Kirby work. How do you pick what work influenced him when he made the Stone Men? Did he tell anyone? In these days of everything having to be quantified in triplicate, signatures, grades, to establish value – how do you authenticate what is a prototype?

There are three other Ant-Man prototype books listed all in Strange tales #73, 78, and 92. Ironically issue #92 comes out in January 1962, the same month as Tales to Astonish #27 the first appearance of Ant-Man. Hard to be a prototype book for a character that has already been created.

Only one book. Tales of Suspense #31 published the same month as Fantastic Four #5, as also noticed by CBD super commenter Chris Meli. Although we will never officially know which book came first I would hazard a guess that if Jack Kirby was working on his new bread and butter book (The Fantastic Four) and creating a new badass villain that Doctor Doom would have come first. I will also guess that Jack Kirby’s inspiration for the character’s mask came from author Alexandre Dumas and the Three Musketeers/The Man in the Iron Mask fame… Or maybe it came from Tim Holt #32. 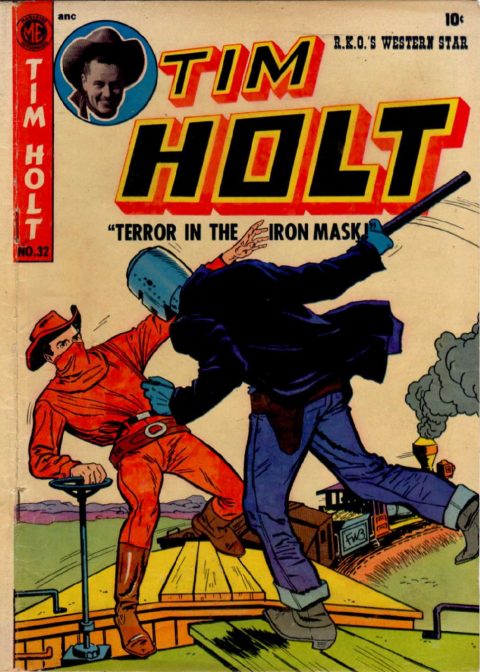 I think not. I do believe Kid Colt’s Iron Mask did when this title and all its characters went into public domain. Marvel lifted the western Ghost Rider from there as well. Back to prototypes.

As you can see some of the prototype books were becoming a little silly. Here are a couple more.

Mr. Hyde in Journey in to Mystery #79. I’ll give Robert Louis Stevenson the credit for that one.

The Human Torch in Strange Tales #76. You’re kidding right. I’ll go out on a limb and say inspiration for that character came from Professor Horton and Marvel Comics #1.

If you were fast as the speed of light – you were a Quicksilver prototype (definitely not a Flash). If you were an alien with an oversized head – a Watcher prototype and on and on. No connection what so ever to the actual characters established later.

Anybody have prototype issues they feel strongly about? Any from a different era or publisher I would love to hear them.

I have only sent one submission to Overstreet in my life many, many years ago and it must have got shot down. Showcase #6 1st appearance of the Challengers of the Unknown for Fantastic Four #1 😊.

Of course, I don’t expect any changes from Overstreet Price guide on these prototype issues, just a warning to fans not to go overboard paying the over-hyped prices asked for some of these books, unless of course you really, really, want it 😊.

No values listed today but pretty much every prototype singled out in the guide is a priced at a premium to a non-prototype run book.