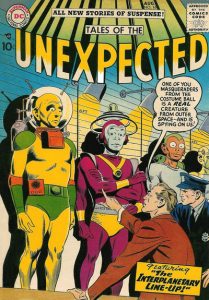 I love my chats with Mike and we always make sure we throw some comics into the conversation, this time we got on about prototypes, check his great post on prototypes, and while I get his argument I do think that not all prototypes are created equal. I do think that if a plausible line can be drawn from the prototype to the ultimate creation then that book deserves some consideration.

For this week’s post I want to avoid the whole Marvel Monster prototypes and switch over to DC Comics and offer up my Spotlight pick as Tales of the Unexpected #16.

Tales of the Unexpected #16 features a 6 page Jack Kirby drawn story called “The Magic Hammer” about a guy named Gerald Bald who find’s Thor’s Hammer and uses it to make rain. It’s all fine and dandy til Thor comes around to collect his hammer. The story features Loki as well.

I know that Thor and Loki are Norse mythology figures and I know that in this book they don’t look like our Marvel Thor and Loki but I still like this book. Had the book been pencilled by anybody else I might not think as highly of it but it was Jack Kirby and 5 years later Jack Kirby helped usher in Marvel’s Thor and Loki. The grand comics database does not assign a writer to the book so I’m not sure how much Kirby was involved with the story.

So while obviously not a prototype Tales of the Unexpected #16 is a great book to add to a well-rounded and diverse collection, the Kirby/Thor connection is too appealing to pass up. I’m not saying that his book is a must have that will skyrocket in price but what I am saying is that it deserves some separation in the Guide. Currently the Price Guide has all 8 Kirby drawn issues lumped in at one price. Like I said above I think the book is a great talking point, it’s a fun piece of trivia that merits some extra attention, it’s a comic that will make any Kirby fan, Marvel fan, Thor fan or 50s DC fan all the richer for owning it.

These early Tales of the Unexpected are tough to track down but they are out there. There has only been one CGC tracked sale in the past 3 years and the CGC census only shows 13 graded as of this post but for this book CGC is not the way to go simply because you won’t find any. Tales of the Unexpected #16 is waiting for you in some old time dealers Silver Age DC bins and its posted on line on some eBay stores by sellers who have come across random 50s DC comics.