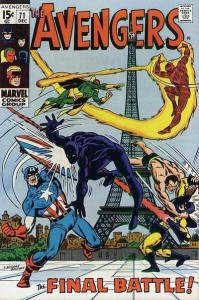 Avengers #71 is one of those comic books that is always missing from the Avengers bins. It’s a book I’ll always look for whenever I’m at a comic convention or visiting a new comic shop. More often than not this book is missing.

There are only 95 copies graded at 9.0 or better at the time of this post which makes graded high grade copies relatively scarce when compared to other key Avengers in this era (issue #57, 1st appearance the Vision has 176 copies graded above 9.0).