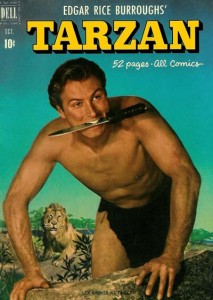 There’s a nice copy of Tarzan #25 sitting in my comic collection! About 15 years ago I bought a collection of Gold Key comics from the late 60s and early 70s and in the pile was a book called Brothers of the Spear #1. What a cool book I thought! Being that type I quickly found out that the characters first appeared in Tarzan #25 and within a few short months I hunted myself down a solid copy!

I swear I forgot I even had this comic. It wasn’t until I sifted through last week’s new comic shipment (Dec. 21/11) and found an absolutely beautiful 272 page Hard Cover Brothers of the Spear Archive (Dark Horse), reprinting the Brothers of the Spear appearances in Tarzan #25 to #67, that I remembered having the duo’s 1st appearance. Dark Horse notes that this is the first time these stories have been reprinted. It’s a gorgeous book and it quickly became the inspiration for this week’s Undervalued Spotlight.

Back in 1951 superheroes were almost extinct, crime and gory horror comics ruled but they were already in the scope of American lawmakers looking to clean up the business. Amongst all this turmoil Dell Comics quietly and very successfully published its mix of Disney titles (Walt Disney’s Comics and Stories alone outsold the whole EC Comics line), Westerns and a slew of licensed properties that included Tarzan. As the saying went, Dell Comics were Good Comics!

Back in the late 1940s comic publishers had to add some text and back up stories to gain special periodical postage rates needed to support their mail order subscription programs. “Boy” and “Mabu” were two such features running in the back of Tarzan issues in the early days of the title (Tarzan was launched in 1948). In this Undervalued Spotlight we’re celebrating the groundbreaking launch of another such back up story, “Brothers of the Spear” which 1st appeared in Tarzan #25.

Writer Gaylord (Mr. Prolific) DuBois and Tarzan artist/inker Jesse Marsh introduced our heroes Dan-El and Natongo in a 6 page story titled “Brothers of the Spear”. The series appeared in 132 issues straight ending in Tarzan #156 (Feb/66). Legendary artist Russ Manning (Magnus, Robot Fighter) would assume artistic duties for Brothers of the Spear starting with Tarzan #39. The series ended as a back up because Manning replaced the retiring Marsh on Tarzan. Brothers appeared sporadically after that.

In 1972 DC licensed the rights to Tarzan and famously kept the Gold Key numbering sequence lauching their Tarzan with issue #207. Gold Key retained the Brothers of the Spear rights and launched what would be a 17 issue run with my aforementioned Brothers of the Spear #1 (June/72). An issue #18 was published by Whitman in 1982. 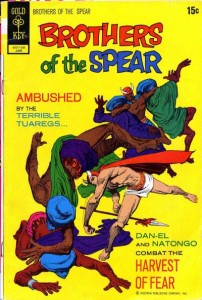 Somehow Brother of the Spear was not a property included in the group of Gold Key titles acquired by Valiant Comics in the late 1980s. Titles like Doc Solar and Turok went over to Valiant but Brothers of the Spear surprisingly did not. Too bad.

Tarzan #25 features a striking Les Barker as Tarzan photo cover. Yes it would have been nice to see The Brothers on the cover but hey, Pep Comics #22 seems to do just fine without Archie gracing the cover!

Dan-El and Natongo were the Brothers of the Spear, they were unrelated kings of neighboring countries; both men had been usurped from their thrones. Exiled they found friendship and a common bond in each other. They swore an oath of brotherhood as they began their quest to reclaim their rightful thrones. 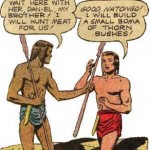 What makes Brothers of the Sphere historically significant is that in 1951 America, which was still a segregated America, a comic series placed a black hero, Natongo from the Tungelu tribe, and a white hero, Dan-El, from the lost white African tribe of Abu-Zulu, on equal terms. This was no small thing at the time and I’m surprised that more is not written about this series from this historical perspective.

To put it into perspective American comic fans had enjoyed reading about the heroic exploits of an African king for over 14 unbroken years before Marvel introduced their African king T’Challa aka The Black Panther.

Our society has come a long way in these 60 years and it’s easy to overlook such important and bold steps taken so long ago. The steps were taken though and they were very important. This book’s historical significance should be better recognized and more appreciated.

Tarzan #25 is a pretty tough comic book to snag. Though no doubt this issue sits snug in many a fine Tarzan collection, not many make it out on their own. As of this post CGC has only graded 6 copies and only 3 are better than an 8.0 in grade (the highest graded is a 9.0).