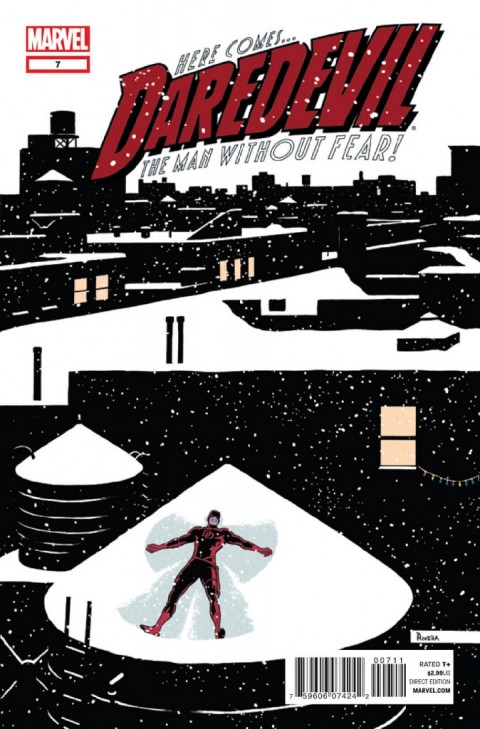 Earlier this year Marvel relaunched the Daredevil series after Andy Diggle’s Shadowland story and his subsequent Reborn limited series. It’s been a polarizing run for Mark Waid, so let’s take a look at issue seven of this series; a very special Christmas issue at that.

Daredevil has swashbuckled his way past low level villains and has continued to deny his connection to Daredevil, that is until he stumbled onto a plot involving Hydra and A.I.M. and the uniforms made famous by Reed Richards and the Fantastic Four. A possible misstep which has placed him in many people’s crosshairs.

Continuing his attempts to atone for misdeeds of issue’s past, Matt Murdock takes a group of kids from the Cresskill School for the Blind up to cottage country for a few days to ease their minds from their daily troubles. It seems to follow them though, as the bus driver veers off the road in an attempt to avoid a deer running across the icy roadway. The bus crashes, leaving each rider frazzled, hurt or dead. Unconscious, we find Murdock flashing back to a Christmas party prior to the trip; sitting in the dark analyzing the Fantastic Four patch he had recently recovered, Foggy walks into the office and encourages Matt to come out. He obliges, walking into the party wearing a pair of devil horns and a red shirt proclaiming “I’m not Daredevil.” Recognizing the voice of attorney Kirsten McDuffie, Matt purposely fumbles a bottle of wine, and after a short conversation, Murdock flashes back to his current predicament. The bus driver is dead, the kids are scared, and Matt himself is injured. Amid the wreckage, Matt hurries each kid away from the bus only moments before it explodes. Upon leading them away, Murdock changes into full Daredevil garb and guides them further to safety. Eventually succumbing to his injury, Murdock collapses in the snow while chasing down a nearby truck. The children make him a sleigh/stretcher to cart him away with to a nearby cabin where he’s able to regain his strength before leaving town and returning home. The issue concludes with an ominous view of Murdock’s former grave site.

The seventh issue of Mark Waid’s Daredevil only loosely ties in to the previous six-issue story arc. This was largely a Christmas themed issue featuring Murdock taking troubled youths on a trip, which he apparently does every year, to a cabin a little further north of New York City. As a concept I liked the premise of the story as it ties into the heart of who Murdock is as a character. However, Waid poorly executed the plotting, which by and large felt campish and poorly laid out. The Christmas party felt hokey, yet I caught a glimpse of what may be in store for Daredevil right around the corner. The scene began with a seemingly moody Murdock sitting alone in his office with the lights turned off as he examines the Fantastic Four patch he recovered in issue six. The mood instantly changes though once Murdock joins the party, where he becomes a fun-loving bloke who openly mocks the public’s belief he is Daredevil by wearing devil horns and a red shirt with a proclamation written on it, stating, “I’m not Daredevil.” There’s a clear dichotomy in the mood of those pages, but I’m not sure whether Waid is competent enough to execute such a complicated story as his track record doesn’t lend to that belief. Instead, he continues on with the “fingers in ears whilst singing la la la la la la I can’t hear you, it didn’t happen,” approach. The change in Murdock’s characterization is very abrupt comparing Bendis/Brubaker/Diggle to this iteration, which amounts to a complete departure in continuity such that Waid can do what he likes for better or worse. The complete absolution of his deeds seems the case, while allusions to Shadowland have been painfully missing over the first seven issues. This was a hallmark event for the character, and it’s being ignored. Waid’s run is failing to hit what makes the character tick, and it’s accompanied by poorly thought out plotting whereby a man claiming not to be Daredevil leaps “fearlessly” into a party dressed in a shirt meant to mock those believing he’s Daredevil. I feel like the story was designed to be a transition between story arcs, while also implementing a christmas theme to the issue, in that this issue feels like filler. Waid continues his story ho-hum story, that’s beginning to feel more like the campy Adam West, 60’s era Batman than the Daredevil we’ve come to know since the 1970s.

I’m not a fan of Rivera’s previous work, but his pencils in Daredevil have been very good. While his pencils by large are dull and boring in books such as the O.M.I.T. story in The Amazing Spider-Man, his work on this series has been very enjoyable. Here Rivera continues to do what no other Daredevil artist has done before him, and that’s help readers conceptualize through visual representations how Matt Murdock’s heightened senses function, whether using his radar sense to locate items, read heartbeats or find locations, or using his heightened sense of smell to notice changes in the wind or the smell of gasoline prior to the bus exploding. He also nicely contrasted the mood with his pencils and inks early in the issue where Murdock had been sitting in his office in the dark before going out the party. The dark moodiness of the pages clash with the festiveness of the party, which combined with radar sense panels, inked by Joe Rivera and coloured by Javier Rodriguez,  create a nicely presented set of pages to look at. I also thought Rivera did a great job with the entire sequence of pages following the bus crash as Murdock trudges through the snow with the children behind him; the snow fall looks remarkably beautiful on the page. I’ve not been a fan of Paolo Rivera thus far, and although I still prefer previous Daredevil artists, I’ve gained an appreciation for the intricacies of Rivera’s work on Daredevil. Rivera’s pencil work in the book is finely detailed right down to the most minute twitch in a character’s face, the scent of a given smell as it passes Murdock’s nose, or the representation of Murdock’s radar sense in full effect.

Despite the acclaim the series has garnered from some circles, I can’t afford it the same praise. Waid’s Daredevil leaves me fuming after each issue with its detached take on the character from any continuity from the last 40 years. Reading the book feels more like something from the early 1960s than something modernized, while the reckless abandon both Waid and Marvel editorial has taken with this series is worrisome. Waid’s story is as light as it is ridiculous, as he’s failed to put his stamp on the character, as I’m not even sure what his Daredevil represents. Altogether this issue, and series, is disappointing. It is salvaged by Rivera’s artwork which outshines Waid’s writing unbelievably. It’s the highlight of the series by far, while Waid struggles to meet even a sub-par performance in the light of Rivera’s fantastic work. Daredevil deserves its praise in so far as the artwork is carrying this book and often tells the story better than Waid. It’s very much the case, where the art for the most part obscures the shallow plotting thus far.