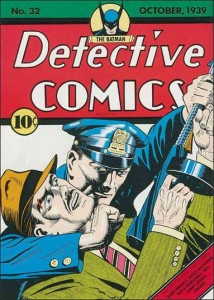 As far as I’m concerned there is no greater comic book title than Detective Comics. The iconic cover to the March 1937 1st issue is one of the most identifiable covers in the hobby. Actually those first 26 pre-Batman issues are almost mythical in their stature, it’s like they’re archaeological manuscripts or something.

I’ll never dispute Action Comics #1’s spot as the most important American comic book but I’ll argue that Batman as the hero was perhaps the greater creation. Simply put we can all relate to Batman while Superman remains this unapproachable godlike alien we live fantasies through. The future is secure for Batman while Superman now and then teeters toward becoming an outdated relic.

This spotlight centers on the massively tough run of Detective Comics that is #28 to 37. These are the post introduction, pre Robin issues that are so ridiculously tough to hunt down it makes you want to cry.  Of these 10 issues #28, #30, #32 and #34 do not feature a Batman cover though our Detective #32 is the 1st of these to feature the Batman head logo on the cover. Surely all 4 of these comics are cheated by the Overstreet Price Guide and by the market in general and I think #32 is perhaps the sleeper within this group.

Though I’m sure that there are a few Detectives from this era still ungraded I do believe the grade distributions evident as of this post on the CGC census are not random and do perhaps represent the relative scarcity of the issues vis-a-vis each other.

CGC has graded only 27 copies of Detective Comics #32 with a universal blue label (unrestored) and only 4 of these have attained a grade of 6.0 or better. By comparison of the 28 universally graded Detective #27s (Batman’s first appearance and a $million dollar comic) there are actually 11 that grade 6.0 or better with 2 at 8.0. Only the legendary Detective Comics #35 appears to be scarcer since only 2 are graded above 6.0 though the nicer copy is an 8.5. So to repeat, this is one tough book!

The Overstreet Comic Book price guide and the market in general have not been giving this comic book the respect it deserves. The Overstreet price guide 9.2 grade value is a mere $17,000 and according to the guide you should be able to pick up a solid 2.0 copy for $919! Are you kidding me, that’s what you’d shell out for a 4.5 copy of Fantastic Four #2 and there are over 400 of those graded. You’d figure a comic reaching back into the 1930s that is as tough as tough gets and that features the 6th appearance of the Batman would be commanding some insane prices. No so. A CGC 1.8 sold back in November of 2011 and it got $918 which is just above guide, even the highest graded known copy, one of the two CGC 7.5s, only fetched $9,560 or just over 1.5x guide back in May 2011. 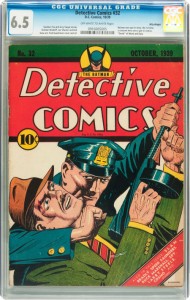 The Overstreet Comic Book Price Guide famously describes Detective Comics #32 as the first time a costumed hero uses a gun in comic books. Batman actually uses the gun to kill two characters in the issue. Batman shoots the villain Monk and his female assistant Dala, killing them both. We do have to let Batman off the hook here though since both the Monk and Dala are vampires and Batman uses silver bullets that work in lieu of wooden stakes.