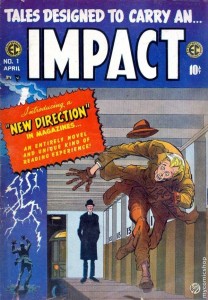 Last week I posted about the $45 million paid for Roy Lichtenstein’s Sleeping Girl. A great debate ensued on the merits of comic book art and whether some of it should be considered fine art.

Even before that post this site has had commenters complaining about the injustices the market bestows on some of the great works of comics. Why is the 1st Watchmen comic not worth more, how come I can buy single issues of Frank Miller’s Born Again run for $2?

CBD writer Anthony Falcone recently posted a comment that he’d just re-read Avengers #1 and that it was an awful read. In fact many of the 1st appearance issues of the characters we love were terrible, poorly written and sometimes even poorly drawn.

It seems specific comic book values have very little to do with the quality the book delivers. Some of the classic Golden Age comics get by on their cover appeal alone, lop off a head, melt a face, tie up a girl and presto you have a book in high demand.

I thought about this for a while and challenged myself to come up with some comics that could deliver on many fronts. What comics deliver artistic merit to the point of being considered by many as Fine Art, what books deliver great stories, what books deliver investing value but are still somewhat overlooked and should be able to deliver even more?

Impact lasted only 5 issues. It was the 1st of E.C.’s New Direction line up. Basically The U.S. Senate had just legislated all of E.C.’s hot selling crime, sex and gore comics out of print, the Comics Code was just coming into effect, and E.C. attempted to recapture its former glory through the filter of a very vigilant sensor. Of course the title and the publisher were doomed.

Impact #1 is a very special book though; yes it was the abortive effort to launch a new style of comic but it was also the issue that contained one of the most highly regarded comic book stories ever printed.

“Master Race” is an extremely influential 8 page story that is regarded as a high point for comic books as art. The story’s power and grace are delivered by the great Bernard Krigstein. Comics.org does give Al Feldstein script credits but with a question mark. Other web sites have Feldstein giving Krigstein the concept then later adding input as editor. Krigstein was originally given 6 pages to tell the story but became so inspired at the possibilities of conveying such a story in comic book form that he demanded 12 pages. E.C. ultimately allowed an 8 page story, famously reworking the rest of the book to fit the extended story.

Bernard Krigstein has always been highly acclaimed for his innovations, his influence has been lasting.

There are many websites that go to great lengths in analyzing almost every panel, every trick and innovation employed by Krigstein in this story but I’ll leave you to discover those on your own.

The story is a simple one, a former Nazi death camp commander is spotted by a former inmate and survivor of the death camp on a New York City subway 10 years after the war. “Master Race” is a story of the Holocaust, something rarely discussed in any media at that time. The subject matter was definitely controversial for mid 50s America.

Krigstein not only tackled the Holocaust he also exposed its most gruesome of details, the medical experiments on living people, the mass live burials, one dramatic panel has people walking by the death camp holding their noses to keep the stench of human bodies being cremated from reaching their nostrils. This was as heavy a subject matter as you could get and Krigstein tackled it head on, using sequencing and imaging not seen in comic book up to that point. Bernard Krigstein sensed the comic book’s potential and shamelessly tested its limits.

Krigstein began to vibrate with the inner language of comics, to understand that its essence lay in the “breakdowns,” the box-to-box exposition that breaks moments of time down into spatial units. “It’s what happens between these panels that’s so fascinating,” he said in a 1962 interview. “Look at all that dramatic action that one never gets a chance to see. It’s between these panels that the fascinating stuff takes place. And unless the artist would be permitted to delve into that, the form must remain infantile.”

“Krigstein’s formal qualities as a storyteller—not the story’s subject matter—make “Master Race” a tour de force. He encapsulates the decade of Nazi terror powerfully but with restraint, never slipping into the Grand Guignol that made EC notorious. The two tiers of wordless staccato panels that climax the story have become justly famous among the comics literate. They have often been described as “cinematic,” a phrase thoroughly inadequate to the achievement: Krigstein condenses and distends time itself.

“The brilliance of execution here is staggering.  This is artistry comparable to our greatest novellas: just as every sentence in Joseph Conrad’s Heart of Darkness can be taken literally, figuratively, allegorically, etc., so is every shot here chosen for a physical motion and a metaphoric truth.

The man who will die is first shown descending into a darkened subway as if it is the underworld.  The subway platform becomes his own private  death trap, with bars and gates like the camp he ran.”

“But of course, the real innovation here is the last panel on the first page: he shows the speed of the subway by expertly quadrupling and octupling his drawing of the passing figures WITHOUT GUTTER BREAKS!  This repetition is all done within a single panel, suggesting the simultaneous ghost images we see when we rapidly fan our hands or observe a spinning propeller.  By leaving out the gutters, we are given the impression that time has not been segmented; we are not observing distinct moments in time but rather a single snapshot of intense speed.  The fact that the woman multiplied wears a traditionally Jewish head scarf suggests a metaphoric reading of how his guilt is intensified on an everyday basis: he freezes and repeats the faces of those who resemble his numerous victims.  They will not leave the frame but stretch to fill it.”

Personally I truly enjoyed experiencing this story. I picked up on the innovative techniques mentioned above immediately, the multiple heads to convey speed, the slowing down of the death scene by splintering the frames. After finishing “Master Race” I felt like I’d just read something important.

This is an important comic because it contains an important work an I’m betting that more people will realize that fact in the coming years.