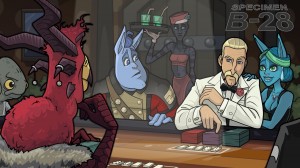 This time we’re going out of this world. While at Wizard World I ran into Stephen Daymond whose work I had noticed before but hadn’t followed up on. Specimen B28 is a little bit 70’s UFO culture, a little bit Tripping the Rift and a bit Douglas Adams, all wrapped up in a package reminiscent of old Nelvana movies. 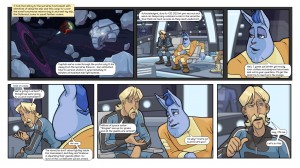 See, Mitch has been abducted by aliens. Over and over and over. They came looking for humans with psychic tendencies and came up empty. But their equipment keep flagging Mitch. After a few dozen extractions and repeated druggings Mitch couldn’t be kept in the dark any longer and just recruit him. To do what? Play cards in a galactic tournament. 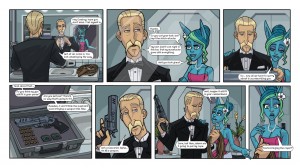 Specimen B28 actually started life as a short animated film by Stephen and it shows. Not only in the very animated look of the art, and as I alluded to earlier, a distinct nod to the style of the early films from Nelvana like Rock and Rule and Romie-O and Julie-8. Very clean, crisp work you’d expect to see on the screen. 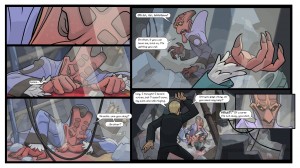 The comic also feels a bit like watching something animated, partially because of the art and design, partially because of the types of the ‘shots’ used, but also the pacing and approach to stoytelling. Every page, at least early on, feels like a scene with a cut to the next scene as you turn the page. It’s almost like seeing the storyboards for the film version, not surprising really, the relationship between comics and stroryboards are numerous. 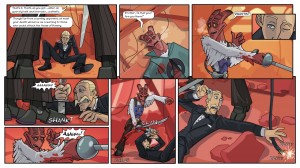 Minor nitpick about the lettering, and a common enough one, there needs to be a bit more breathing room in the word bubbles; the lettering almost touches at times. It’s cleanly done, just a bit cozy. 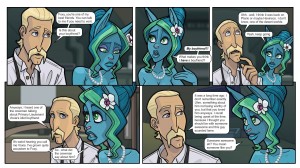 It’s still early in the story, but with a setup like this and basically a universe of possibilities for stories, Specimen is worth scanning again and again.