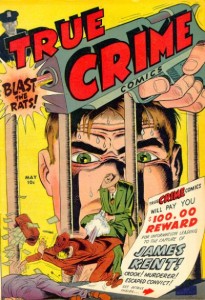 There was this great crime comic collection I bought back in the late 1980s. The collection consisted of 300 or so crime comics, much of the stuff I’d never seen before. There were some great titles like Crime on the Run (which the guide did not even know existed back then), Gangsters and Gun Molls, Crimes by Women and more. This was a treasure trove of crime comic books.

I didn’t know much about the genre back then but I started learning fast.

Check out the Overstreet Price Guide write up for the issue;

The “Murder, Morphine, and Me” story mentioned above was drawn (and supposedly written) by Golden Age giant Jack Cole, it is one of the most important published crime comic stories of the era; it features a young female drug addict who gets caught up with the wrong crowd. The most famous panel, the one used by psychiatrist Dr. Fredric Wertham as exhibit A in his anti comic report for the US Senate (Seduction of the Innocent) has the girl’s eye being forcibly held open while one of the gangsters threatens to poke a huge hypodermic needle into it.

In the new world of CGC and internet auctions comics that hardly ever reach market are sometimes out of site/out of mind. Very few sales of this book have been recorded, the last sale I know of was a CGC 4.0 that sold earlier this month for $419.The guide value at 4.0 is $374.

That was one smart buyer, only 11 copies have been CGC graded to date and the top grade as of this post is a 7.5.

Comic collecting and investing is splintering into snagging individual comics of merit. Iconic comics should see even greater demand as new collectors seek out “important” pieces of comic book history. True Crime Comics #2 fits this bill, it is an iconic crime comic issue and it is currently and mistakenly being undervalued by the market.