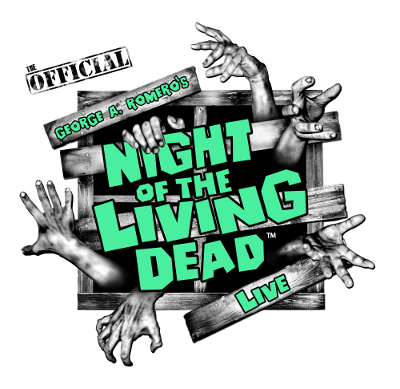 OK zombie fans, in case you haven’t heard, there is going to be a live theatre production of George Romero’s classic Night of the Living Dead. I got a chance to sit down with Executive Producer Marty Birthelmer and talk about the project.

CBD: First off, what is Night of the Living Dead Live?

MB: Nictophobia Films is the Hamilton based production company that is behind the production of this play. They have done several full-length films including Devil’s Night to be released on DVD through Black Fawn Films this October 30th.

CBD: Why do you call it “official”?

MB: Long story! We have actually gone through the trials of approaching George Romero, John Russo, and Russ Streiner (the original film creators and writers) with the proposed idea for the stage play, gave them the script outline, location, and everything else that could be included in the “pitch” at the time. They gave us a big check mark to proceed. We are the FIRST AND ONLY people to do this, yet there are several stage versions already created and that have performed. This was due to a slip in copyrighting with the original movie. We felt we wanted to authenticate and even earn the chance to use the product they created so long ago and so when we were granted the opportunity we wanted to clarify that this isn’t like the previous stage versions, and this is a legitimate product that the originators are backing!

CBD: What can fans of the movie expect from the stage show?

MB: Fans can expect a great interactive stage performance! Like I said, authentic black and white casts and settings with tremendous contrasts and detail will be all around and moving through the audience. Characters will all be brought straight across from the film, as will the original story and theme will be present but with a more light-hearted and slightly more modern dialogue. Our director and co-writer is Chris Bond, co-director and co-writer of Evil Dead: The Musical so he will help bring that fun experience across (but again, we aren’t a musical!) This all takes place in the casual Theatre Passe Muraille in Toronto which is a cozy space that will really pull the audience into the mayhem. There will be a ghoulish group playing live music melodies in between stage action, large visual decors, and even a bar to grab a beverage and slip into the mood! Again, this is a thrilling AND casual experience that should appeal to ALL fans – it will also be PG 13 so everyone can enjoy!

CBD: How did you get involved?

MB: Over the summer I happened to meet the producers/creators of the stage play. Immediately I saw their passion for the industry, genre, and project. We discussed getting involved in doing a film sometime down the road after this play finished. After agreeing we really want to work together we talked about the play and realized we couldn’t wait to do the film together – let’s start collaborating now on this play! So I signed onto the project and have been working daily with them since.

CBD: How can fans show their support for the project?

MB: Well first I hope they want to! Because of the internet doing such a thing is easier to do. We currently have an Indiegogo campaign running at indiegogo.com/notldl where people can donate to help fund the play and offset the costs such as theatre rental, workshop space, sets, etc. Many levels of donations are accepted and each comes with its perks. You can get your name in our virtual cemetery that stays on our site forever to show you helped fund the play, plus exclusive to indiegogo donation merchandise, like limited edition silk screen prints of exclaimed artist Rob Sacchetto, limited edition T-shirts, original Night of the Living Dead script with working title “The Anubis”, signed by the three creators, plus some have advanced tickets to the show! This campaign ends October 31st at midnight, but after than check into our site at nightofthelivingdeadlive.com for our event schedule, where we will have other exclusive items and merchandise for sale that will continue to help on costs!

CBD: You have been working with local comic shops to promote the project; can you tell our readers more about that?

MB: Absolutely. We LOVE the local comic shop! I mean I used to work at a comic shop for years. Currently we are setting up at Hamilton’s Big B Comics on October 27th from 12-4pm to promote our indiegogo campaign, dish out some T-shirts, and raffle prize packs which include some of the above mentioned exclusive swag! We’re bringing a gang of zombies and the Fangoria magazine event photographer so check into our site and Fangoria’s for the scoop! This of course coincides perfectly with their first annual Halloween event and we are happy to be a part of it with them. After this we have a holiday season event planned loosely around December 9th at the Silver Snail, Canadian comic store of the year, located in Toronto. That event will have tickets to our shows on sale, and even have George A. Romero in store signing and taking photos. Again, check our event schedule starting November for the firm dates!

CBD: Why do you think zombies are so popular?

MB: Oh jeez. Why does everyone love pizza? There is some innate love for zombies these days and it’s tough to find exactly why, but my guess is that the drama surrounding them is intense and relatable. Take a look at popular film and television with zombies and you see people struggling to survive these things that once were human. To see the person in your arms turn from sane friend or family member into a flesh-craving, mindless animal in front of your eyes has a huge element of human drama. I find that good zombie films and movies don’t so much focus on the zombie itself, but use them to amplify the story of society and how it breaks down, or perseveres. Plus, zombie movies and shows usually have that fundamentally “full” cast. You have that tough guy with smooth lines you wish you were, the smart and wizened one that finds out how to beat them which you think you are, and that wimp who flees by himself and ends up getting trapped and runs into a horde only to have limbs ripped off – the person you most likely are.

CBD: Last question, what is your favourite zombie movie?

MB: Ooooo good question. If I had to say favourite zombie franchise, it would be Resident Evil. I loved all of the games, and found the movies to be mostly entertaining. Unfortunately none of the movies were a favourite. My favourite zombie flick would probably end up being split between Shaun of the Dead and Zombieland. Hey, who through that?! (I’m assuming you’re throwing things at your monitor) Before I get beat over the head by my production team, let me explain! Shaun of the Dead is a great spoof that isn’t, and actually has a very zombie centric theme with great action and innovation. Zombieland has Woody Harrelson. Oh yeah, and the kid from Facebook. But seriously, same as Shaun where I like my humour with the dead, and it has a great fun innovative story to boot (and I’m a huge Bill Murray fan. If he appeared in Gigli it would have been a top 10 film). Final point – I’m a generation behind the Romero golden era so cut me some slack!

# Night of The Living Dead Live