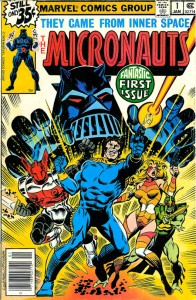 After World War II Japan was a recovering economy that built cheap toys for export, primarily to Europe and North America. Japan being Japan began to improve their production quality and constantly came up with innovations that made their products better and better.

Japan was also an emerging pop culture superpower with creators like Osamu Tezuka laying down the base for Japan’s future world conquering Manga and Anime. One of the early Japanese trends that caught on in the West was robot toys. The Japanese were not only making quality inexpensive toys they were making cool toy lines and coming up with cool concepts that were starting to catch on in the West.

Microman was one such toy line, Microman went on to inspire and influence future mega hits like Gundam and Transformers. In the mid 1970s Microman, produced by Japanese firm Takara, was being imported into North America in 1976 by Mego under the Micronauts name brand.

According to Wiki comic writer Bill Mantlo’s kid played with Microman toys and Bill was so impressed, both with the premise and the quality that he went to Marvel editor Jim Shooter and asked that these toys be licensed by Marvel and adapted into comics.

In 1978 Marvel was already licensing Godzilla and they were still riding high on the success of their Star Wars adaptations so Bill got the green light. Marvel actually brought 3 Japanese inspired “robot” titles to market in 1979, Micronauts, Rom and Shogun Warriors.

Micronauts had a pretty good run lasting 59 issues and in 1984 they co-starred in a 4 issue mini-series with the X-Men. It is interesting to note that Micronauts last issue #59 was published in August 1984 and September 1984 saw the release of Transformers #1.

The Micronauts are still kicking around, in 2002 Image Comics tried a series and in 2004 Devil’s Due Publishing had a turn. There is always talk of a movie, back in 2009 J.J. Abrams was trying to develop a story.

The Micronauts #1 features a cover by Dave Cockrum and the 17 page “Homeworld” story features Bill Mantlo scripts with pencil breakdowns by Michael Golden and finished artwork and inks by Joe Rubinstein.

I remember picking up 5 copies of Micronauts #1, it was the late 1978, and I was 14 years old and already a speculator! The comic has spent over 30 years in bargain bins thanks to guys like me buying multiple issues. But time does funny things, tons and tons of Micronauts #1s have been bought out of bargain bins and not by speculators but by readers thinking “this looks cool for a buck, I’ll try it, then I’ll use it as a coffee coaster”. Fast forward to today and while still relatively plentiful they are not everywhere. CGC 9.8 copies fetch over $80 with CGC 9.6 copies getting $30 or more.

Micronauts #1 will never be a cornerstone of your comic book investment portfolio but it is a book that belongs in your collection. The book paved the way for similar franchises like Transformers to succeed and the title itself is by no means dead.

I challenge you this spring and summer to head to your local conventions and dig up a high grade copy of Micronauts #1. I’ll give 10 points to anyone who can by at least a 9.4 looking copy for $2 or less, 5 points for $5 or less. You’ll have to give me 5 points if you have to pay $10 for one.